If you were to play ‘six degrees of separation’ between Joe Biden and Boston mobster Whitey Bulger, you won’t have to go as far as you think.

The Biden family worked with his nephew. That’s actually how they got all that China money.

If some guy with an (R) after his name had close business connections with the nephew of a mobster, Dems would demand some kind of an investigation. But the rules change when it’s someone whose power they are trying to protect.

And the media aren’t just protecting Joe Biden’s presidency… they ‘fortified’ the election that got him here in the first place. Don’t expect them to go looking into reasons their guy might be morally disqualified for the position they put him in.

That’s where the non-regime media alternatives come into play.

The NYPost has been sifting through the muck in Hunter’s laptop, and they have turned up some real gems. This time, they’ve found emails showing a close connection between Bulger’s nephew and the Biden family’s Chinese business dealings.

The connection was made during Biden’s time in office.

Jim Bulger, chairman and co-founder of the Boston-based Thornton Group financial advisory firm, forwarded an email in January 2014 from associate Mike Leonard proposing a meeting among Hunter Biden — whose father, Joe Biden, at the time was vice president of the United States — Bulger, and Rosemont Seneca co-founder Devon Archer.

The email sent on Jan. 27, 2014 — with a subject line that read, “Meeting with Chinese Ambassador” — suggested the group meet in Washington, DC, to “talk about the fund,” according to the message.

“Pretty interesting that someone at the Embassy in Beijing would be interested in what the domestic Bohai PE Fund was up to,” Jim Bulger wrote. “Thought you guys should see this. I still believe a meeting early next week with the Ambassador if possible would be best, hope this as not cause to [sic] much of an ass ache.” — NYPost

Even the mobster’s nephew found it ‘interesting’ that the Chinese embassy would be taking interest in the business dealings of the Veep’s kid. 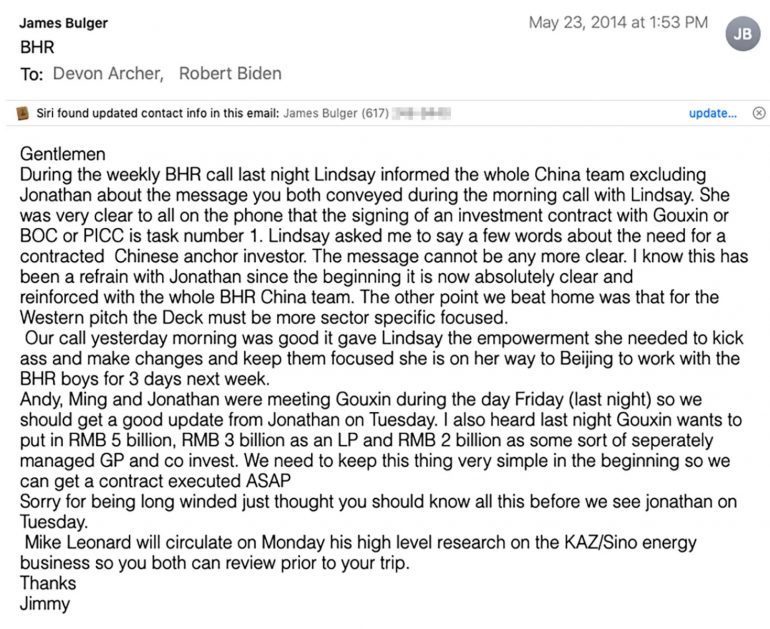 Some phrases jump out of that email: ‘need for a contracted Chinese Anchor investor’ is one of them. Sino energy is another one of them.

China was very interested in working with the son of the Vice President.

But Dems turn a blind eye to this while throwing around terms like ’emoluments’ and ‘hatch act’ at every Republican they possibly can.