Crybully journo Taylor Lorenz reports in the Washington Post that the Department of Homeland Security’s “Disinformation Governance Board” that was to be led by a peddler of “Russian Collusion” disinformation, Nina Jankowicz, has been “paused” just three weeks after it was announced. Lorenz, who appears to have made it her career to destroy people’s lives by using old social media posts, blames this on a “right-wing disinformation campaign.”

Biden’s “Ministry of Truth” didn’t even make it to the first monthiversary.

On the plus side, at least Jankowicz can plug her book on losing the information war with some real-world experience. 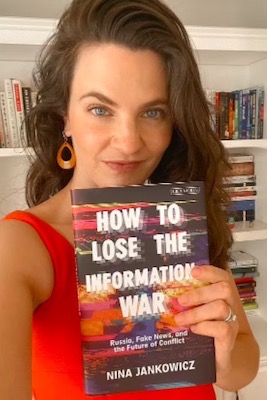 Lorenz posted a whole thread about the abrupt end of the Biden-Harris admin’s attempt to combat “disinformation” that basically summarizes her entire article while linking to it in each tweet.

SCOOP: Just 3 weeks after its announcement, the Disinformation Governance Board is being “paused” and intra-departmental DHS working groups focused on disinformation have been suspended.

Interviews w/ sources inside the DHS, on the Hill, along w/ disinfo experts, show how Jankowicz was set up to fail by an admin unsure of its messaging & unprepared to counteract the coordinated, far right online campaign against her https://t.co/rLi3FvUNMw

On Monday, the DHS decided to shut down the Disinformation Governance Board entirely, and Jankowicz drafted a resignation letter in response to the Board’s dissolution.

Then, late last night, they decided it would simply be “paused.” https://t.co/rLi3FvUNMw

Intra-departmental working groups within DHS focused on mis-, dis- and mal-information have been suspended. The board itself could still be shut down permanently pending a review from the Homeland Security Advisory Council https://t.co/rLi3FvUNMw

A 15 yr veteran of the DHS called the dept’s response to the controversy “mind boggling.”

“I’ve never seen the Department react like this before,” he said. Its failure to protect Jankowicz shows admin’s inability to counter far right disinfo campaigns https://t.co/rLi3FvUNMw

Every single day, right wing media & far right influencers flood the internet w/ smears and lies about her and her work. My story details those attacks. https://t.co/rLi3FvUNMw

Dozens of websites including Breitbart, the Post Millennial & the New York Post have mined thousands of Jackowicz’s past social media posts, publishing articles that mischaracterize her comments. Each post has been misrepresented to spark maximum outragehttps://t.co/rLi3FvDKKw

The week following Jankowicz’s announcement, approximately 70% of Fox News’ one-hour segments mentioned either Jankowicz or the Board.

Fox News coverage was referenced in some of the most popular posts on Facebook and Twitter attacking Jankowicz. https://t.co/rLi3FvUNMw

“They try to define ppl by these single, decontextualized moments,” @etbrooking said. “In Nina’s case it’s a few comments out of thousands.. They fixate on these small instances & they define this villain. Then, they start building a mythology around them” https://t.co/rLi3FvUNMw

She saved you a click with that thread. Bet WaPo’s happy for that. She doesn’t seem to understand how social media works for an alleged “expert.”

But hey, let’s indulge her and go to an archived version of the article and see if she says anything interesting.

She starts off with the facts…

On Monday, DHS decided to shut down the board, according to multiple people with knowledge of the situation. By Tuesday morning, Jankowicz had drafted a resignation letter in response to the board’s dissolution.

But Tuesday night, Jankowicz was pulled into an urgent call with DHS officials who gave her the choice to stay on, even as the department’s work was put on hold because of the backlash it faced, according to multiple people with knowledge of the call. Working groups within DHS focused on mis-, dis- and mal-information have been suspended. The board could still be shut down pending a review from the Homeland Security Advisory Council; Jankowicz is evaluating her position within the department.

Lorenz bases this on “backlash” about the government agency that handles counter-terrorism deciding what is and is not “mis-, dis-, and mal-information” as the reason that the board is being shut down.

Hell, yes! That’s exactly right. There should be backlash against that!

While there are some things that are clearly true like the earth is round and the United States is a sovereign nation, other things that were all agreed-upon realities are now being questioned by activists and (in some cases) being lumped into a pile that they’re calling “disinformation.” Look at how activists (and a SCOTUS nominee) cannot define what a woman is or woke activists are insisting that 2+2=5.

Besides, the United States has something called the First Amendment that allows people to say what they want to even if it’s hateful or offensive to some people.

But even sticking with the political — like the Russian Collusion narrative or that Hunter Biden’s laptop was a disinformation campaign — Jankowicz was on the wrong end of those.

She was asked “what makes your view of disinformation more accurate than others?” pic.twitter.com/CsRhMk1njK

And then there’s this fascinating report by Revolver News that was published on Monday:

It couldn’t have been any of that — it was a right-wing smear campaign, according to Lorenz.

The absolute chutzpah of this crybully journo:

Jankowicz’s experience is a prime example of how the right-wing Internet apparatus operates, where far-right influencers attempt to identify a target, present a narrative and then repeat mischaracterizations across social media and websites with the aim of discrediting and attacking anyone who seeks to challenge them. It also shows what happens when institutions, when confronted with these attacks, don’t respond effectively.

ClashDaily has several articles on how awful Taylor Lorenz is and how she does this very thing that she is accusing right-wing media of doing.

Lorenz cites the catalyst that got the ball rolling on this “disinformation campaign” as Human Events editor Jack Posobiec who “posted a tweets” out to his 1.7 million followers about Jankowicz and called the DHS’s Disinformation Governance Board Biden’s “Ministry of Truth” — a reference to George Orwell’s book, “1984.”

Dozens of websites including Breitbart, the Post Millennial, the Daily Caller and the New York Post began mining Jackowicz’s past social media posts and publishing articles to generate controversy. Some were simply mocking, making fun of her for parodying a song from “Mary Poppins” to talk about misinformation. In another instance, a performance where Jankowicz sings a popular musical theater song about a person’s desire to become rich and powerful, was misrepresented to imply that Jankowicz herself was after money and power and would sleep with men to get it.

As this online campaign played out, DHS and the Biden administration struggled to counter the repeated attacks.

Jack is also a reporter who is (rightfully) proud of his reporting in this particular case. He dug into who Jankowicz was and the world got to see it.

Here is my response:

Every American owes Jack thanks for exposing Jankowicz.

Here are a few examples of CNN’s Brian Stelter getting called out for peddling fake news — in some cases by his own guests:

Lorenz does the left-wing smear in this article right at the end as you’ll see. But first, she has to cite the unnamed “experts.”

Experts say that right-wing disinformation and smear campaigns regularly follow the same playbook and that it’s crucial that the public and leaders of institutions, especially in the government, the media and educational bodies, understand more fully how these cycles operate.

The campaigns invariably start with identifying a person to characterize as a villain. Attacking faceless institutions is difficult, so a figurehead (almost always a woman or person of color) is found to serve as its face. Whether that person has actual power within that institution is often immaterial. By discrediting those made to represent institutions they seek to bring down, they discredit the institution itself.

Jankowicz’s case is a perfect example of this system at work, said Emerson T. Brooking, a resident senior fellow at the Atlantic Council’s Digital Forensic Research Lab. “They try to define people by these single, decontextualized moments,” Brooking said. “In Nina’s case it’s a few TikTok videos, or one or two comments out of thousands of public appearances. They fixate on these small instances and they define this villain.”

A smear campaign is when they try to “define people by these single decontextualized moments”, eh?

Wait ’til that guy from the Atlantic Council gets a load of the Charlottesville smear that the sitting President launched his campaign on and is still using against the previous president and the 73 million people that voted for him in 2020!

She then says that it could be dangerous because “white nationalist violence is thriving”… and the midterms are approaching.

“The irony is that Nina’s role was to come up with strategies for the department to counter this type of campaign, and now they’ve just succumbed to it themselves,” said one Hill staffer with knowledge of the situation who spoke on the condition of anonymity because they were not authorized to speak on the issue. “They didn’t even fight, they just rolled over.”

DHS staffers worried that the way Jankowicz’s situation was mishandled could hurt their ability to recruit future talent at a time when white nationalist violence is thriving and the midterm elections are approaching.
Source: Washington Post (archived)

There it is. The unfounded claim that “white nationalist violence is thriving” which she apparently (from the context, at least) believes should be equated with “Republicans.” It’s so slimy and disgusting… so typical of Lorenz’s style of “reporting.”

It’s also completely disingenuous because the media goes silent when something is identified as left-wing violence, downplays it as “mostly peaceful”, or simply excuses it as a “backlash” that was somehow provoked by the right then memory-holes it as quickly as possible.

Maybe Lorenz should have spoken to DHS about the imminent threat of violence from pro-abortion activists who want to murder Supreme Court Justices because these ghouls don’t like it that their made-up “Constitutional right” to dismember preborn children is being overturned.

DHS’s Disinformation Governance Board might be gone for now, but they’re going to keep looking for ways to pathologize conservative views as “dangerous.”