You know your society is bass-ackward when Mcdonald’s is declared ‘essential’ but gyms are closed in the middle of a pandemic of panic where one of the most dangerous comorbidities is obesity.

It’s a close call between whether that, getting people to hide indoors all day when low vitamin D was worse advice among a litany of bad advice handed out by our ‘experts’.

It’s almost as though they want us to become sick, weak, and dying younger than our parents’ generation. How else would you explain the rationale behind the next social movement?

We’re so far gone now that the University of Illinois Chicago’s School of Public Health is taking a stand. Of course, they’re rooting their new position in explicitly racial terms:

The focus on body size is rooted in racism
Around 81 percent of societies historically have favored people in larger bodies5. Larger bodies signified wealth and prosperity while thinness signified poverty and weakness. However, this began to change due to racism and eugenics. Charles Darwin and other race scientists created a hierarchy of civilization, placing white men on top and people of color, specifically black people, at the bottom, considering them to be “less civilized.” Fatness and differing body characteristics were used to justify lack of civilization: fatness used as a marker of “uncivilized behavior” while thinness was “more evolved”. This idea was maintained throughout the United States in the 19th and 20th centuries, as a way to justify slavery, racism and classism, and control women through “temperance”. This ideology has perpetuated Desirability Politics- where thinness and whiteness are given more access to social, political and cultural capital6,7. —UIC Website

Weight discrimination is rooted in racism? Is RACISM what was behind the left’s excitement over this photo, idealizing the guy spouting fire, and fat-shaming the guy holding the flag? Huh. That’s not how the left would have characterized it just a few short years ago. There couldn’t be any flaws in that logic, could there? 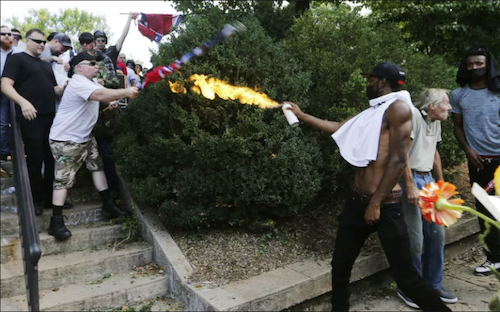 How about when they fat-shamed Trump with some unflattering photos or the naked statue?

Is it racist when the Left picks out heavy-set caricatures of the supporters on the political right eating BBQ, riding in a truck, or cheering sporting events?

It’s ‘racism’ that changed public opinion on Chris Pratt when he dropped that weight and got absolutely jacked? Go figure.

If our attitudes toward weight are ‘biased’ and ‘bigoted’ what does that mean for medical advice? You don’t have to be an insurance actuary to know that some of the preconditions for poor health can be linked to what kind of food you’re shoving in your mouth.

There are PSA ads on some radio stations as we speak warning the public that Type II Diabetes is reversible if you catch it early and change your diet. So what health guidance is this now WOKE school giving us?

Public Health’s focus on “obesity” prevention has increased exponentially within the last few decades,and with it an increase in weight stigma and negative attitudes towards people in larger bodies. In the past decade, weight discrimination has increased by 66 percent, and is one of the only forms of discrimination actively condoned by society (1,2). Decades of research have shown that experiencing weight stigma increases one’s risk for diabetes, heart disease, discrimination, bullying, eating disorders, sedentariness, lifelong discomfort in one’s body and even early death 2,3,18,25,26.

Additionally, “obesity” related public health approaches can be harmful because they are based on limited or poor quality evidence, they focus on preventing one outcome at the expense of another outcome, they lack community engagement and they ignore the root cause of problems4. However, the public health field has not taken a critical look at this research, focusing on the narrative that weight is controllable and a personal responsibility. If the goal is to find the most ethical and effective strategies to achieve optimal public health, there needs to be an alternative to “obesity” and weight-focused approaches and a shift in understanding of weight stigma as a social justice issue. —UIC Website

So now it’s ‘hurtful’ to warn someone that if you don’t slow down on scarfing those Big Macs your heart could explode? And it’s somehow ‘mean’ to tell people that our personal choices have a direct impact on how much we weigh?

Sure would like to see what cardiologists have to say about this trend.

Or have they caved to the identity politics pressure, too?