In the midst of the Supreme Court on the verge of overturning Roe v. Wade, there is a photo of a pro-abortion protester holding a sign that said “I wish my Mom had aborted me”. This is an extreme way of advocating the right to have an abortion (i.e. not being a burden on her mother,) unless this individual sees her life as meaningless. 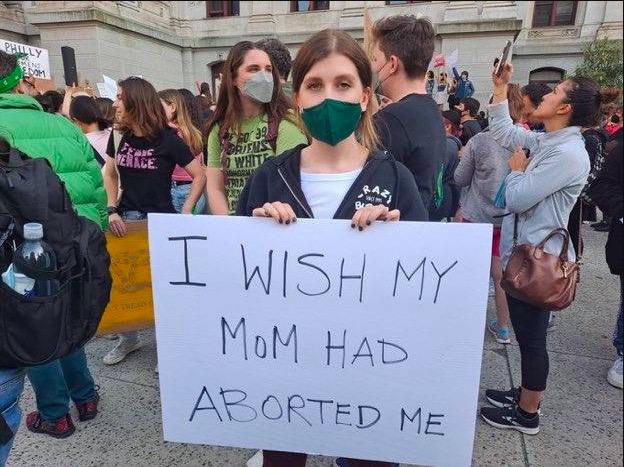 Speaking of extreme, there is the case of Toni Vernelli, an animal rights activist/environmentalist. After learning she was pregnant, she got an abortion in order to reduce her carbon footprint.  She later got herself sterilized because she believed that having children is the worst thing someone could do to the planet.  Meanwhile, there are environmentalists holding signs during their protests that say “Save the Planet- Kill Yourself”.   I don’t think anyone will pull a Jonestown anytime soon in order to save the planet.

Another extreme case is Alexandra Hunt, a former stripper who is a candidate in the Democratic primary for Pennsylvania’s Third District (currently held by Congressman Dwight Evans). She had an abortion due to her concerns over climate change, as well as the world not being suitable to bring a child into over other issues, e.g. lack of jobs, economic woes, etc.  Actually, there are plenty of jobs out there, and people are still having children, which in turn does not pose an ecological threat.  Also, did she not consider giving her child up for adoption?

It seems eerie that there is a baby formula shortage when Roe v. Wade is about to be overturned. Given Joe Biden’s stance on abortion (despite his Catholic faith), maybe he wants to see infants starve to death.  What if someone said to Biden that his mother should have aborted him?  How would he react?

So far, Pope Francis hasn’t commented about Roe v. Wade on the verge of being overturned, Biden’s recent comments about abortion, or the pro-abortion protests that have targeted Catholic Churches, especially since some of the protesters want to burn the Eucharist. Is he still preoccupied with global warming/climate change?

Meanwhile, Nancy Pelosi (despite her being Catholic as well), wants to codify Roe v. Wade, an unlikely scenario.