We’ve seen first-hand what kind of damage Pelosi and Schumer holding the gavels can unleash on the country. If getting those gavels back is a key priority… so is picking a primary candidate who can win.

If we’d held even one more seat in the Senate, this whole administration would have taken a very different direction. They wouldn’t have had the ability to cram hostile agendas down our throats or appoint openly radical nominees for positions of power.

The Bill Buckley standard for who to support in a race is pretty simple: “I’d be for the most right, viable candidate who could win.”

That means the public perception of a candidate, not only to the base but to the voting public who will be making the decision should given at least some consideration when choosing a candidate. We’ve seen elections on either side of the political aisle where the public flipped loyalties because an incumbent candidate had veered too far out of alignment with what the public wanted from a leader.

In choosing a leader, issues are one consideration. Resume is another. But we can’t dismiss the importance of personal relatability, either. It really doesn’t matter how enthusiastic the base is for one candidate if they can’t get support from swing votes and undecideds.

That brings us to the latest Emerson College polling from the PA primaries.

The current polling numbers give Oz a slight lead among Republican Party supporters. But that only tells part of the story. Fifteen percent are undecided, and these three are carrying the lion’s share of support: 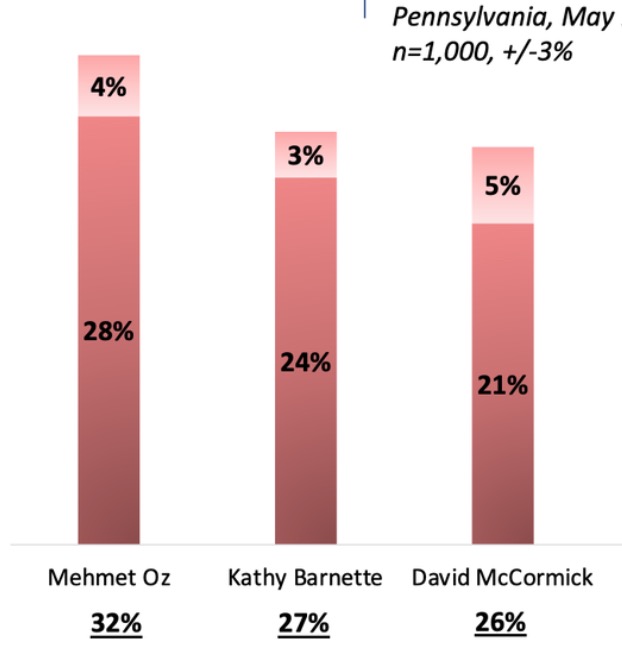 Here are some of the demographic breakdowns. Pay particular attention to the last part about the ‘unfavorables’.

Popular support or not, Oz’s favorability numbers are looking almost as bad as Biden’s.

Whoever your choice is, keep that in mind before you head out to vote. We want to get this one right.