Democrats care about all the poor victims — so long as they can be leveraged to advance their favorite issues.

We see this pattern play out all the time.

When an issue can be leveraged to lecture us and tell either Republicans or Americans generally how much we suck and need to change, you will see Team Biden jump right on it. Just like we did with the white bigot who shot up that Buffalo grocery.

But let a Chinese Communist Party sympathizer attack a Taiwanese church, or a black bigot shoot up Asian victims in a New York subway or a guy with some ugly things to say about white people run down victims in a Christmas parade, and what does Biden have to say about those? Nothing but crickets. Because that undercuts the narrative.

Likewise, while the bodies of fourth-graders are still warm in the spot where they were slaughtered, Biden and his party were already running the speech they had doubtless roughed out long before now waiting for the opportunity to use the bodies of children as a stump on which to stand and push their gun control.

Ask yourself, do you ever hear him wringing his hands over the children murdered in big cities like Chicago, where a person is shot every three minutes? (Following stats are from HeyJackass.) 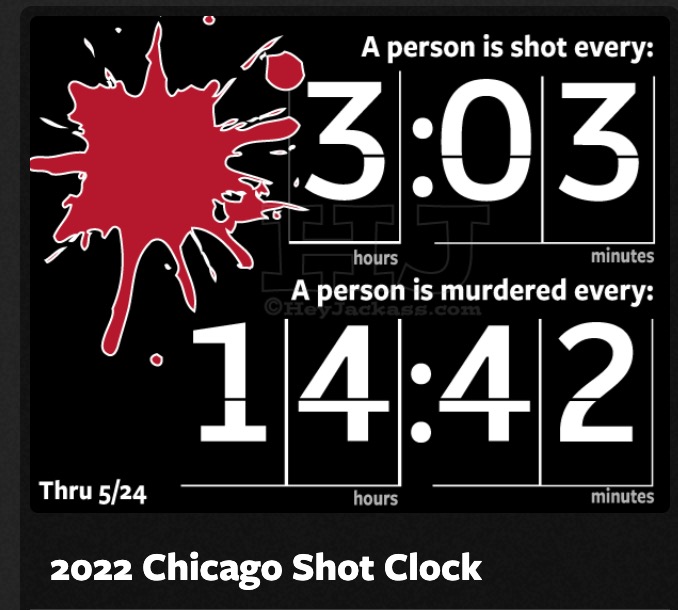 If Joe’s real priority was saving lives, you might see him get just as worked up about kids killed weekend after weekend in Chicago, Baltimore, LA, or New Orleans as he does about kids mowed down in a one-off.

But that’s not his priority, is it? You can tell what Joe’s real priority is by where he goes looking for solutions.

Do you see him suggesting stiffer penalties for any crime involving a gun? The 1990’s version of Senator Biden might want that. But the decrepit old Biden we see today? The only thing about 2022 Biden you could describe as ‘stiff’ is his gait.

He doesn’t want to turn his attention to the vast quantity of criminals misusing guns. Heck, he’s hesitant to deport even the criminals who do act badly. Instead, he is turning his anger toward law-abiding gun owners.

He wants to restrict gun owners, whose safety record is often even better than law enforcement, and who have used personal firearms to save countless lives and to stop many attackers in their tracks.

“I hoped, when I became president, I would not have to do this again,” Biden said at the White House, in sometimes halting, emotional remarks. “Another massacre in Uvalde, Texas. An elementary school. Beautiful, innocent second, third and fourth graders.”

Like any naive leftist, he wants to generically ‘do something’. But he’s sketchy on what it is he’d do. Why wouldn’t he be, since there are exactly no changes to existing laws that could have prevented this.

Ben Shapiro had something to say about that:

And about what their (unspoken) endgame really is.

Do you know who Biden did NOT mention in his rant about guns?

The good guy with a gun who rushed to the rescue of the remaining children.

A Border Patrol agent who was nearby when the #UvaldeSchoolShooting began rushed into the school without waiting for backup and shot and killed the gunman, who was behind a barricade, reports @AP. https://t.co/hgMB0bS9Rk

There’s one other reason he’s jumping on this issue. He’s desperate to change the national conversation from all the other things he’s gotten wrong in the first year and a bit in office to a conversation about dead childeren. Because he thinks he can ‘win’ that conversation.

Isn’t it interesting how the Founding Fathers & Framers understood the importance of gun ownership as a means of keeping tyranny on a tight leash, while Authoritarians ever since have been eager to take guns out of the hands of ordinary people?

Can you name, for example, a single 20th Century totalitarian of any stripe who didn’t disarm his public before putting his boot on the neck of his people?

As for the dismissive tone gun grabbers like to use about ‘thoughts and prayers’…? Let’s just say that not all prayers are created equal.