The rules changed on election day 2020. Until that day, casting doubt on any election won by a Republican is practically a national pastime.

Then came 2020, with a ‘fortified’ election, active suppression of news stories, hidden camera reports of CNN trying to massage public opinion against Trump and in favor of Biden, mail-in-ballots, Zuckerbucks, and a whole host of other weird issues.

We have been solemnly assured that this is the most secure election in history. We must give no credence to stories like this one: Sworn Witness Claims To Have Hacked ‘Secure’ Georgia Runoff Race Voting Machines

The election was good, we are told. Biden got 81 million votes. He is beloved by a grateful nation, and anyone asking questions about it is a subversive Nazi who believes the Big Lie.

That pretty much sums up the Democrat/Media treatment of anyone who asks probing questions about 2020.

That hasn’t stopped states from raising questions about how things were handled in 2020, and what positive changes can be made going forward.

Wisconsin’s discoveries on the matter were interesting, to say the least.

The full 136 page report can be found here.

They were damning enough that Biden’s administration has told us we must not pay attention to the man behind the curtain. The ‘rumor/reality’ section was updated May 27th, in direct response to claims made in Wisconsin’s report about machine vulnerabilities.

Page 13 – Dominion system connected to the internet on election night

Page 14 – ESS system connected to the internet on election night

The preliminary report was wide-ranging, and included references to lines of inquiry that have begun, but have not yet been seen through to completion, like an investigation into how nursing home residents that are ineligible to vote have been recorded as casting ballots, or the pinging of cellphone data at drop-boxes of the kind mentioned in 2000 Mules.

Here’s part of what was said about nursing homes, for instance.

Specific vulnerabilities of the voting machine were critiqued, which included evidence that at least some of them had internet access during the election itself, which we had been told was not the case. 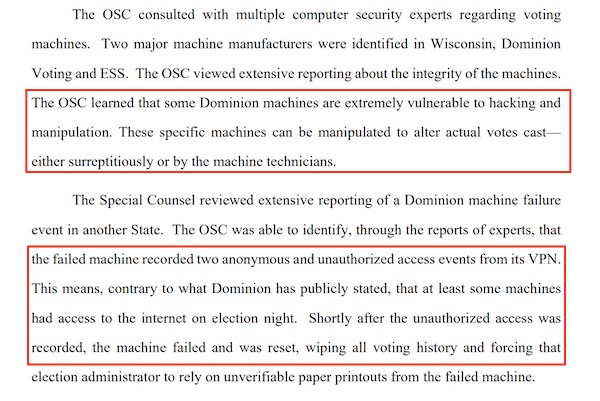 Here are a few more screen grabs to give a flavor of the report:

Here is an example of election officials knowingly allowing votes to count even if they did not meet the legal submission criteria, simply because nobody told them ‘no’.

Would any of this changed the eventual outcome? God alone knows for sure. You cannot prove a counterfactual.

But if the Dems doubted for a single second that having so many decisions in the hands of individuals with an obviously partisan agenda was one of the surest possible ways to corrupt an election outcome, or at least erode public confidence in it, ask them how incensed the media would be if the NRA or some kind of an Evangelical charity were the ones calling the shots?