With Joe’s margin of victory in 2020 being around 10,000 votes, an irregularity surrounding 19,000 votes could have potentially changed the outcome in at least this one state.

This is precisely the sort of problem that the Framers had in view when they provided an alternate way to resolve an election if neither candidate managed to secure a majority in the Electoral College.

Had this information come to light in November of 2020, Arizona might not have fallen into the Blue column.

But we’re getting a little ahead of ourselves.

What happened in Arizona, and what’s so special about these particular 19,000 votes?

Here’s a summary in one paragraph of the complaint:

Maricopa County withheld requested public documents for nearly seven months. These documents show 18,000 additional late ballots not previously reported. Several contests were decided by less than 20K votes, most notably the statewide presidential race that was decided by only 10,457. The 20,000 ballots recorded as incoming from the USPS on and after November 4 were of sufficient quantity to change the result of the 2020 General Election in Arizona.

The complaint is by a group called Verity Vote, and can be found here.

The above-the-fold information in their report is captured in this screengrab. 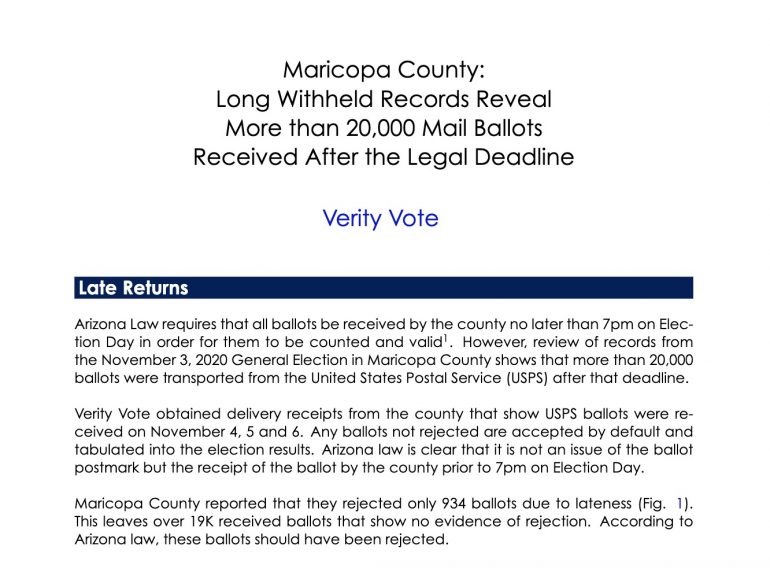 More than 20,000 ballots received after deadline should have been deemed invalid. But of that 20,000, invalid votes only some 900 ballots were rejected.

This means more than 19,000 late, invalid ballots should have been rejected. That is significant because it is enough to potentially sway the results of Arizona’s presidential election, which rested with a final tally of Joe Biden winning the state with 10,457 more votes than Donald Trump.

It is impossible to know if the results would be different if the late ballots had not been counted in Maricopa County.

Chain of custody records for the ballots were requested. That’s where Verity Vote found an important clue… only to be stonewalled in the answer by officials for seven long months. They were even fought in court until AFTER Joe was safely nestled in the Oval office.

The driver goes to the post office and picks up more ballots, then takes the truck to Runbeck Election Services where all ballots are given an incoming scan.

It is here, at the scan, that the “Inbound Receipt of Delivery” document is generated. This receipt of delivery shows the date, time, and names of the employees delivering and receiving the ballots, and it itemizes the number of ballots that came from the post office, dropboxes, and early in-person voting.

In response to some document requests, Maricopa County made the Receipt of Delivery documents available for public inspection for dates spanning Oct. 13 to Nov. 6, 2020.

From that collection of documents, Verity Vote noticed that documents from Nov. 4, 2020—the day after the election—were missing. Verity Vote requested Maricopa County provide the Receipt of Delivery for that day, first with a few phone calls, then with written requests. It should have been a simple request because all the other dates were already public. But this request went to a county attorney.

“After numerous delays, multiple follow up emails, and phone calls, county employees informed Verity Vote that the records were with legal counsel pending review,” the report says. “It took nearly seven months to get the documents.”

The Nov. 4 Receipt of Delivery shows 18,000 ballots were picked up from the Post Office the day after the Nov. 3 election.

Last week, Democrat Guillermina Fuentes pled guilty to ballot harvesting during 2020 primaries. She collected early ballots from non-relatives and dropped them off at a ballot box on election day.

Ballot boxes were in the news in another way as well.

True the Vote founder and president Catherine Engelbrecht and election investigator Gregg Phillips on Tuesday explained their findings of ballot trafficking in Maricopa and Yuma counties.

Chicanery like this is why Arizona legislators have committed to banning drop boxes.

Other states may wish to take note.