Remember when the Democrats — Pelosi, Schumer, Psaki, Biden, Pocahontas, and others — blew off calls for SCOTUS homes to be protected and laws against protesting judges’ private homes to be enforced?

That did not age well at ALL.

Law enforcement officials say an armed man was arrested around 2 in the morning near the home of Supreme Court Justice Brett Kavanaugh.

Officials say the man was armed with a handgun, a knife and pepper spray. He was stopped near — but not at — the justice’s house. And when police detained him, he said he was there to kill Kavanaugh, these officials say.

The arrest was first reported by The Washington Post.

The court confirmed some of the details in a brief statement: “At approximately 1:50 a.m. today, a man was arrested near Justice Kavanaugh’s residence. The man was armed and made threats against Justice Kavanaugh. He was transported to Montgomery County Police 2nd District.”

Officials say the man was from out of state and arrived by taxi. —NBC

Another report described him as having burglary tools and having originated from California.

Fortunately, this was averted before a SECOND left-wing wingnut tried to pull off the kind of political assassination that nearly claimed Scalia’s life. 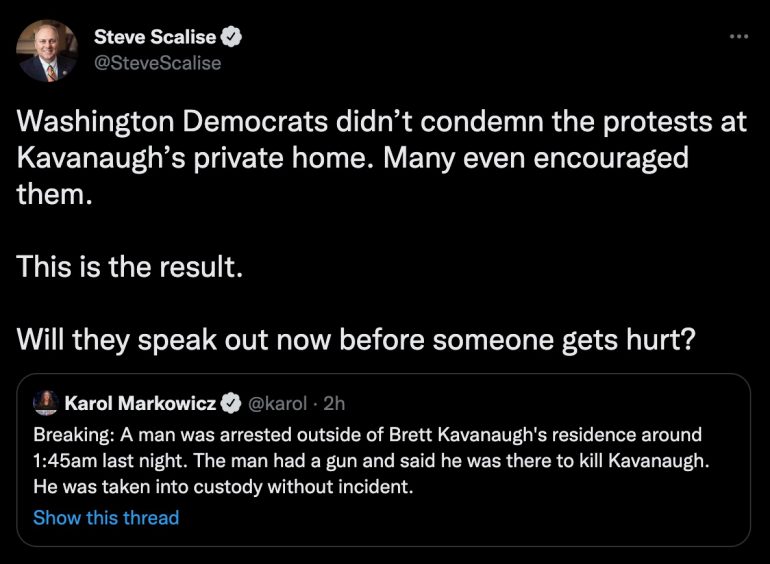 Surprise, surprise, it was all in the service of leftist political causes. In this case, abortion and gun control.

We don't yet know if this would-be Kavanaugh murderer watches Joy Reid's show — chances are very high he didn't since virtually nobody does — but she regularly calls the Justice a Christian nationalist who favors theocracy. Did this inspire violence?https://t.co/liGtT416Ap pic.twitter.com/x3sY8vxDvs

Last we checked, plotting to kill someone for their political views was the textbook of ‘domestic terrorism’. Are you awake out there, Merrick Garland? These people were a hair’s breadth from becoming your colleagues and friends. Now someone on your side of the political spectrum is threatening their lives.

Will sour grapes make you keep looking the other way here? Or are you going to step up and do your damned job?

It’s almost as though Dems were hoping something bad would happen to one of the 6 Republican-appointed Justices whose personal addresses had been leaked. Even by the disreputable standards of their naked thirst for power, that would set some new lows.

I wonder if @chuckschumer is still proud of personally threatening Supreme Court Justices now that people with guns are showing up at their houses to kill them https://t.co/4Xx9iviyNG

The party of lawlessness had no problem with public stunts like the one below, and scoffed at the enforcement of existing laws.

We protest at Kavanaugh’s Chevy Chase home regularly, led by his neighbors, calling for the deviant justice to resign! #InvestigateKavanaugh #ResignKavanaugh pic.twitter.com/mLxXylaTLW

Of course they would. Whether formally or informally, these clods — together with Antifa and BLM — have been acting (with impunity!) as the defacto militant wing of the Democratic party for years.

Group that posted directions to Kavanaugh home, where he lives with his wife and daughters, downplaying threat on his life and their role in that threat. https://t.co/GQHnUrU9l3

Crimes like this are emboldened. Perhaps some will even expect Kamala to help post bail should anyone actually arrest them.

This was in a story about the firebombing of a pro-life group in Wisconsin in early May. The attacks have continued.

In a statement sent to Bellingcat reporter Robert Evans, a group named Jane’s Revenge said that the arson was “only a warning.”

“Next time the infrastructure of the enslavers will not survive,” they said.

If pro-life groups and clinics are not disbanded within the next 30 days, the group is vowing further attacks.

“Wisconsin is the first flashpoint, but we are all over the U.S., and we will issue no further warnings,” the statement said, adding that the radicals will “adopt increasingly extreme tactics to maintain freedom over our own bodies.”

With Chesa Boudin, the son of pro-communist terrorists in a group responsible for bombing the Pentagon and the Capitol building, being thrown out on his ear by the citizens of San Franciso, with activist groups attacking pro-life groups on almost a daily basis, and the credible threats against the lives of Sitting Justices being intercepted by law enforcement, what will Democrats be doing tomorrow night?

The same thing they do every day. They will call Republicans a ‘threat to Democracy’.

Only this time, they will be doing it in prime time, with the help of a big-time TV producer.

Do you really think the public will find some guy in a Chewbacca suit and bison horns a bigger threat to our institutions than the guy prowling the neighborhood at 2 am carrying a bullet with Kavanaugh’s name on it?