As expected, the initial panicky rumblings that Monkeypox would sweep the world the way the last medical scare did were vastly overblown.

That fear never quite gripped the nation. But it has still managed to become a news story.

ClashDaily took our time reporting on this one because we wanted to wait until the initial hype subsided and there were some reliable facts to report.

The reactions we’re looking at today range from which population groups face the greatest risk of the virus, and finally, how different the CDC’s guidance for this virus looks from their shut-down-the-world-and-wrap-us-in-bubble-wrap response to the last global health scare.

For one thing, the disease they initially claimed spread the same way as any common cold might turned out to be associated with far closer contact than that.

That’s a detail that might explain why Canada prioritized their monkeypox vaccine delivery in the way it did:

A concerted effort is now underway to curb the spread of monkeypox in Toronto.

Starting tomorrow, the first of several community-based vaccine clinics will be held in the city. This initial clinic will specifically be for workers at Toronto bathhouses.

Run by Toronto Public Health (TPH) in partnership with Gay Men’s Sexual Health Alliance (GMSH) and other community organizations, the goal of this program is to offer protection to those who have had close contact with someone who has tested positive for monkeypox, those with high risk contacts, and those who have a higher risk of being exposed to the virus. — CP24

A little more about that program:

“We don’t want people to be feeling afraid or anxious, we just want them to feel informed and able to connect with resources,” said Lamb. Steamworks is one of several bathhouses where, on Sunday, the city launched smallpox vaccination clinics to protect workers from monkeypox.

The illness is within the same family as smallpox therefore smallpox vaccines are being used to combat monkeypox as it’s been shown to be effective.

The first clinics were offered exclusively to these employees in order to target high-risk communities, public health said in an online statement Saturday.

Something about that group has qualified them as ‘high risk’. But the article goes out of its way to say we should not associate that risk with culture or behavior associated with bathhouses.

We probably shouldn’t look too closely at those European raves that were super-spreader events, either. Oh, wait. Even the WHO has already weighed in on that:

In an interview with The Associated Press, Dr. David Heymann, who formerly headed WHO’s emergencies department, said the leading theory to explain the spread of the disease was sexual transmission among gay and bisexual men at two raves held in Spain and Belgium. Monkeypox has not previously triggered widespread outbreaks beyond Africa, where it is endemic in animals. — NBC

We might not be calling it ‘monkeypox’ for long.

Just like the Wuhan virus being ‘offensive’ and ‘racist’ — and ‘Xi’ variant name being skipped from the Greek alphabet on account of it’s being offensive to China’s reigning tyrant — the monkeypox name is offensive to some sensitive souls.

Strangely enough, nobody freaked out over names like the London variant or Brasil variant. But a new moniker for monkeypox is only a matter of time.

Monkeypox is poised to get a new name, the World Health Organization says, after scientists recently criticized the current name as “discriminatory and stigmatizing.” The researchers say it’s also inaccurate to name versions of the virus after parts of Africa. —NPR

Part of the reason given for a new name is that this is a different version that seems to have been circulating among people instead of jumping species from an animal reservoir. Here’s how the spread has looked as of just a couple of days ago.

Monkeypox has been reported in 39 countries so far in 2022, and most of them are having their first-ever cases of the disease, according to the WHO. Worldwide, it says, there are around 3,100 confirmed or suspected cases, including 72 deaths. —NPR

Meanwhile, the same CDC that told us we couldn’t have Christmas dinner with granny, or visit a dying loved one in the hospital has some interesting advice for people with monkeypox. 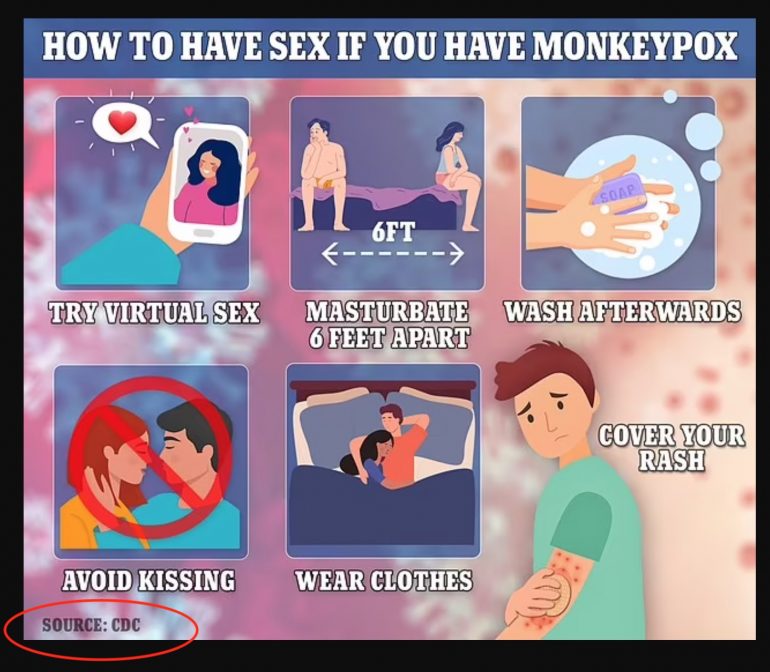 The source article at DailyMail goes into the unpleasant details here.