The “Drag Your Kids To Pride” event was held at a 21+ gay bar in Dallas. That should have been a red flag.

Libraries have been hosting “Drag Queen Story Hour” for preschoolers for years, we’re seeing that schools are holding drag shows for students during school hours, there are lessons for kids to learn the ins and outs of drag performances like costumes and make-up, and now so-called “family-friendly” drag shows are being advertized all over the country.

A few days ago, Libs of TikTok posted a “Mega Drag Thread” about the concerted effort to normalize drag performance for children.

They say it’s innocent. They say it’s just about inclusion and acceptance. They say no one is trying to confuse, corrupt, or sexualize kids. They lie. 🧵

One of the tweets was eye-popping because it was an advertisement to a drag show in Dallas on Saturday at an adults-only gay bar where admission is normally only for those 21+.

An image of one of the drag queens who was scheduled to host doesn’t look very tame at all.

A bar in Dallas, Texas is advertising a drag show for children including the oppurtunity for some kids to perform with the drag queens on stage. This is the drag queen host. pic.twitter.com/L14WloK5ie 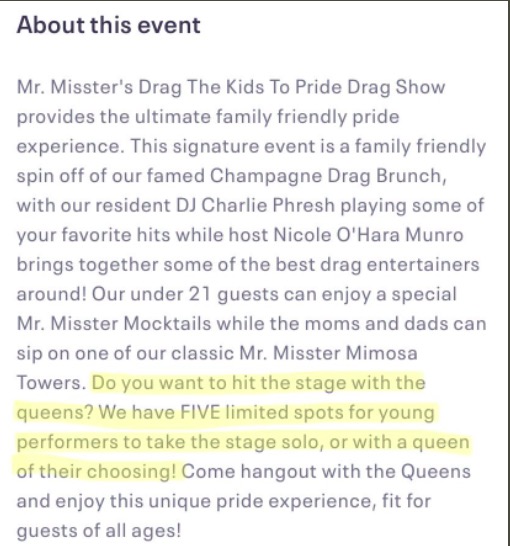 Does this look like a non-sexual performer to you? 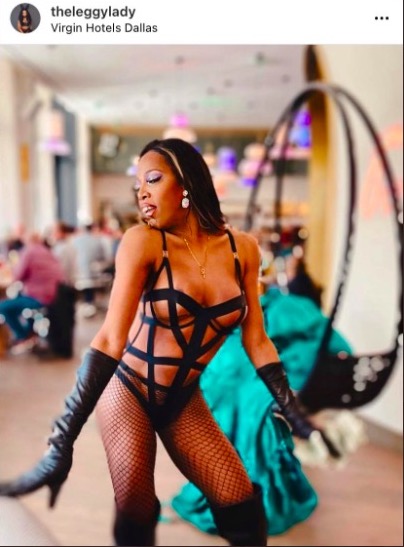 The event was held on June 4 at Mr. Missters which is clearly an adult-themed establishment with neon signs that read “It’s not gonna lick itself” and “I licked it so it’s mine” all lit up.

These should have been taken as more red flags that this entire thing wasn’t appropriate for children.

A “child friendly” drag show is being hosted today in Dallas, TX at a gay bar.

Here are two of the signs on display. pic.twitter.com/RtoggJhyK2

The first sign served as a backdrop for the Drag show.

Photos from the “Drag the Kids to Pride” event at Mr. Misster bar in Dallas pic.twitter.com/Qoop4Vsk7J

Despite the very adult venue, several families with young children were in attendance.

So were some independent journalists with cameras to show what the heck was going on in that bar.

Tayler Hansen (left) and Aldo Buttazzoni (right) took a number of videos of the event.

It turns out… exactly what you’d expect.

Grooming kids to accept sexualized performances of gay men dressing up as women as totally normal.

7 year olds tipping drag queens and hanging out in a 21 and up bar & the Dallas Police dept is letting it happen….why not enforce the law? @DallasPD @Johnson4Dallas pic.twitter.com/aQCWqwlI2L

The kids were even handing out cash to the drag queens.

This is not even the worst footage to come out of the event believe it or not. pic.twitter.com/uIodp84Naf

A Drag Queen just dropped it low for a child and took money from them as well. pic.twitter.com/s7MJhLplzX

They were also invited to take part in the show.

Children are invited on stage and walk with the Drag Queens pic.twitter.com/PGmt5oIxkD

The crowd cheered as children walked with the drag performers

There were toddlers in the audience as well pic.twitter.com/WzVC4Vza1P

It looks like not everyone was keen to be there, though.

As you can tell— this kid was SUPER interested in Drag! pic.twitter.com/BIRSgSRKtX

I don’t think organizers expected parents to take the event name, “Drag Your Kids To Pride” so literally.

Supporters standing outside acting as “security” didn’t have much to say about why they’re supporting kids being exposed to drag shows.

They didn’t have much to say… pic.twitter.com/NQb11csHOT

But, according to organizers, it was a success.

Right before ending the drag show, Nicole O’Hara announced they will be hosting another “DRAG THE KIDS TO PRIDE” event in the near future.

The crowd cheered as the owner of Mr. Missters said they will allow another child’s drag show at the bar. pic.twitter.com/jnumyuMFHi

I admit that I may have been wrong about that guy Alex Stein who was trolling city council meetings.

He’s now doing God’s work and I don’t even care if it’s just for clicks.

“Drag Your Kid to Pride” was the most evil event I have ever seen in my entire life….We as a society need to stand up and stop the sexualization of our children now before its too late! pic.twitter.com/CZmvKE2SNV

Asking the drag queen how she feels for exploiting little children? pic.twitter.com/Jlho6qL1e2

He took a whole lot of heat… and some abuse for showing up.

Buttazzoni interviewed a few people after the event including some of the performers. They all insist that it’s really good for kids and many performers believe that it will encourage kids to try drag.

This wasn’t in San Francisco… this was in Dallas, Texas. Granted, cities lean much further left even in red states, but still!

This sort of B.S. is happening everywhere.

In Jasper Indiana, a pride event with a drag queen performance is being advertised for all ages and they are encouraging kids to bring cash to tip the drag queens. pic.twitter.com/jKBUCM8Rqx

In Warrensburg Missouri, on “the “gay” agenda” they have an all ages drag show plus a drag panel Q&A so kids can learn about drag. Sponsored by a bank, medical clinic, PBS, and more. pic.twitter.com/SxfjrzrnZI

“Are you under the age of 18?” @KenoshaPride is looking specifically for minors to dress up in drag and perform on stage with drag queens. pic.twitter.com/PkkWs1r5S3

It’s bad enough that drag queens are dancing in front of children, but the kids are being encouraged to participate in the grotesque sexualized performance either by joining them onstage and dancing, or by shoving dollar bills at them.

Children and drag queens danced for adults with some kids even collecting money on stage at a drag convention this month. https://t.co/3NOsrrpcBG pic.twitter.com/Ur9zmKaysV

In case you were wondering who sponsored the drag convention for little kids to perform for adults and learn how to become drag artists: @paramountplus @ABHcosmetics @JoAnn_Stores @LAPublicLibrary to name a few. https://t.co/E6uNnxgd7r pic.twitter.com/JN2NJnkgnI

Babylon Bee CEO Seth Dillon is not mincing words with the overt sexualization of kids at these events.

We need a show called “To Catch a Groomer” where cops organize fake “family-friendly” drag shows and then arrest all the parents who show up with their kids.

Geez, are you taking little Janie along with you when you enjoy the buffet at the strip club later, or can we just admit that sticking dollar bills in dancers’ underwear isn’t appropriate for children?

Question for the woman in the hat with her phone out capturing this precious moment for posterity — if it is inappropriate for a child to shove a dollar bill in the underwear of a scantily clad woman, why is it ok to do that for a man pretending to be a scantily clad woman?

A small child — perhaps 5 or 6 — stuffs money into the underwear of a nearly naked drag queen as parents look on, smiling. pic.twitter.com/oCcuABAGwz

While the Groomers that want to celebrate all things LGBTQRSTUV+ (or whatever the hell it is today) insist that Drag Queens are totally innocent forms of entertainment, that’s simply not true.

Frank McCormick, a history teacher that is sounding the alarm on the indoctrination of children in public schools nails the issue in this thread.

2/ that sexually entices and excites. This is evident by its widespread association with gay bars, which are centers for gay courtship.

3. Drag is about sexually signaling. It signals sexual availability to the same-sex by masquerading provocatively as the opposite sex. It is

4/ perform or socialize with children, it takes performative art designed to sexually entice and signal sexual interest and intermingles it with non-sexual activities children find engaging.

5. Society has very strong and clear divisions between adult sexuality and children

6/ that it creates a greater degree of permeability between the world of adult sexual activity and signaling and childhood.

These are arguments grounded in reason, not bigotry, and I encourage you to use them in debates over this issue.

Tayler Hansen said that this was the most disturbing thing that he had ever reported on.

“Overall, it was just terrible. It was disgusting,” said Hansen on the car ride home.

Hansen said that the most disturbing part of the day was when he overheard a boy tell the bartender that he wasn’t gay but then his mom “interrupted this child and said, ‘no, he is gay, don’t let him lie to you — he is.’”

A quick update regarding the child’s drag show—

A woman told the bartender her son was gay after he said he wasn’t. pic.twitter.com/kQffpFPw44

This is exactly what conservatives mean by “grooming” — a term that the left takes such an issue with. While “grooming” has come to mean preparing a child to be sexually abused, that’s not necessarily what is meant. This is an erosion of a child’s innocence, indoctrinates them in radical gender theory, and exposes them to overtly sexualized content from an early age. If that’s not “grooming” them to accept fringe fetishes and gay adult entertainment as normal, then what is it?

Why can’t these weirdos leave the kids alone and just let kids be kids?

We know why. That’s why we call them groomers.