Going back at least as far as cancer research fundraising hero Terry Fox, Canada has a rich history of individuals using a solo trek across the country to raise attention for a cause.

And most of the time, the media is grateful for a feel-good story to drive the news cycle for a change, and are happy to throw their considerable spotlight on the cause.

Meet Warrant Officer James Topp. This is HIS story.

It’s a story of a veteran crossing the country with a rucksack.

You might think that sort of story would be better than catnip for these media clowns. Normally, yes. But there’s something about his cause that is making them stay away. 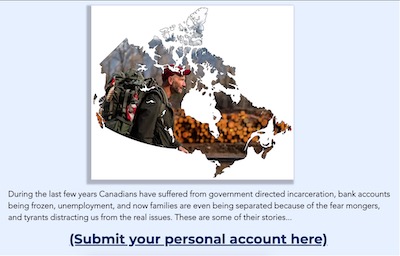 Whatever could it be?

The mission behind this march is clearly spelled out on his website.

After marching from the Terry Fox monument on the Pacific Ocean to only about 100 miles out of Ottawa (Canada’s capital in the Eastern Time Zone) where he plans to complete his journey at the Tomb of the Unknown soldier in the shadow of the Parliament Buildings.

The place where his journey ends is right where the Truckers had their protest broken up in February, just a few dozen yards from the infamous incident where the lady was trampled by the Mounted Police, and his march began not many days after that protest was shut down.

Like their protest, it was about the mandates. In his own case, those vax mandates cost him his civilian job with the police as well as his position within the armed forces.

Here he is taking a day out from marching this week to meet with politicians who cared to listen to his cause. We have it cued up to the moment where he begins sharing his story.

The hype around COVID is already fading.

But the damage that was done to individuals, to businesses, and to the public confidence in our institutions is done. For many, it will have a lasting effect.

For some, the fight is just beginning. For others, let’s learn some important lessons and have a plan in place on how to respond to ham-handed government overreach before we face another such crisis.