Pro-abortion activists are becoming even more aggressive as the final SCOTUS decision on abortion looms… and now they’re bringing minors to their illegal protests.

This isn’t like the peaceful “March for Life” that includes many families that protest the atrocity that is abortion that has claimed the lives of millions of unborn children over the last 5 decades, this is something very different.

While extremist groups like “Jane’s Revenge” which has made overt domestic terror threats, protested churches, and taken credit for firebombing a crisis pregnancy center in Wisconsin, as well as “Ruth Sent Us” who have unapologetically published the home addresses of Supreme Court Justices while downplaying the threat to Justice Kavanaugh’s life, have been grabbing headlines in right-wing media, another group that has some rather questionable roots has been just as active as those others without as much scrutiny.

“Rise Up 4 Abortion Rights”, a pro-abortion activist group — that just happens to be a front for Communism — targeted churches on Mother’s Day, had protesters strip down to their skivvies at Joel Osteen’s church, and had topless protesters interrupt a WNBA game, is now transporting teen girls across state lines to illegally protest in front of a Supreme Court Justice’s home. Lovely.

The teens were bussed from New York to D.C. to take part in protests in front of Justice Amy Coney Barrett’s home as well as the Supreme Court building in order to express their outrage at the possibility that the humanity and rights of the unborn might be acknowledged by the Supreme Court of the United States.

The handful of teens with their hair in pigtails arrived in the residential neighborhood wearing green bandanas (the color that indicates they are part of the “Rise Up 4 Abortion” group), pants painted to look bloody, and holding baby dolls to illustrate the “burden of parenthood” that the incoming era of “forced birth” (as they describe it) that will sweep across the entire nation if Roe is overturned.

Live: Children’s Baby doll Procession heading to Amy Coney Barrett’s house, bringing alive the reality of forcing women to give birth against their will. A call for YOU to act.
Join https://t.co/h1XWlke00H #RoeVWade #RiseUp4AbortionRights pic.twitter.com/qWPHOJcP0M

Correction: typo in this tweet. It’s *Arianna not Ariana

Is this the future you want? On our way to Amy Coney Barrett house – forcing children to give birth to children is barbaric. we are not your incubators. We call on everyone to join us. https://t.co/ri17ohKsp9 #RoeVWade pic.twitter.com/y3CtR4FRZA

Just arrived at Amy Coney Barrett’s house, dropping off babies, re-enacting the American nightmare of forcing girls to give birth against their will. Headed to the Supreme Court, meet us there. #RiseUp4AbortionRight pic.twitter.com/fgt42HNnmU

We aren’t incubators! Youth procession delivered baby dolls to Amy Coney Barrett. We aren’t protesting to change the minds of women-hating fascists.We’re calling on the pro-choice majority, on YOU, to get in the streets to STOP #SCOTUS from overturning Roehttps://t.co/Y0oCPlHcsr pic.twitter.com/nkHT7iamHO

While these protesters insist that they’re not trying to change the minds of the alleged “fascists” like Justice Barrett who don’t agree with their extreme “abortion on demand without apology” position and only to encourage others to protest — it’s still against the law.

We all know it’s B.S. — these protests are a form of intimidation intended to change the decision of the Court after the unprecedented leak in May of an early draft of the majority decision written by Justice Samuel Alito.

Protesting in front of a Justice’s home in order to influence the decision is illegal even if it’s done by teens.

The law is crystal clear. 18 U.S.C. § 1507 states, “pickets or parades in or near a building housing a court of the United States, or in or near a building or residence occupied or used by such judge, juror, witness, or court officer” are prohibited when done with the intent “of interfering with, obstructing, or impeding the administration of justice.” (Emphasis added)

The website even encourages kids to hold school walkouts and skip school to protest at the Supreme Court this week. 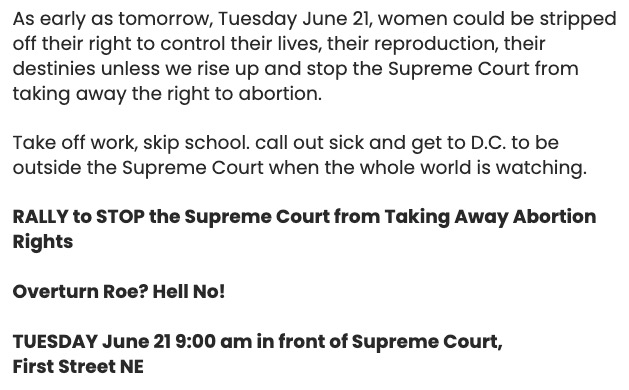 The Rise Up 4 Abortion website also states, “we would sooner bring the gears of society to a grinding halt through mass non-violent resistance than to allow our right to abortion to be taken away.” Apparently, this occurs when a couple of nutters flap their less-than-perky ta-tas at a WNBA game in what appears from the video to be a mostly-empty stadium or a handful of teens as a low-rent cosplay version of the horror flick, “Annabelle”, because they want to continue to permit women to continue to kill their own children for the sake of convenience.

Do these girls’ parents even know that “Rise Up 4 Abortion Rights” appears to be a front group for the “Revolutionary Communist Party”? Did they give permission for their children to cross state lines with Maoists or those who are what you might call “Maoist-adjacent”?

Do they understand how Mao’s “Red Guards” of China’s “Cultural Revolution” in the 1960s were primarily made up of the zealous youth who wanted purity in the Chinese Communist Party and caused the deaths of somewhere around a million people for “wrongthink”?

That “Cultural Revolution” looks quite a bit like the unrest that’s happening today by the “woke” Leftists who are demanding that statutes be torn down, everything is renamed, and history is rewritten.

This “Rise Up 4 Abortion Rights” group admires this. It seems as though they want it to happen in the United States.

Their homepage states that they’re hoping that “women, men, people of all genders” will show up in D.C. to stand with them. They’re protesting for “women’s rights” and still embracing the radical gender theory that there is no gender binary. Of course.

So, to sum up, we’ve got a bunch of “woke” stripping pro-abortion activists from an organization with Communist roots disrupting church services and women’s “sportsball” games in order to “bring the gears of society to a grinding halt” and now they’re encouraging teens to skip school and bussing minors across state lines to hold illegal protests in front of the homes of Supreme Court Justices. Fantastic.

Aren’t these just the sort of influences that you’d want your teen daughter to have?

Of course not! There are much better examples for young ladies out there.