If you’ve been paying attention, Satanists have been working very hard on a rebrand, echoing the prevailing ‘morality’ of the secular woke crowd.

It’s not much of a stretch, really, other than painting the worst aspects of human selfishness in bright friendly colors.

Here they are taking the religious ethic of Old Testament Molech worship (child sacrifice) and giving it a sunny 21st Century spin. 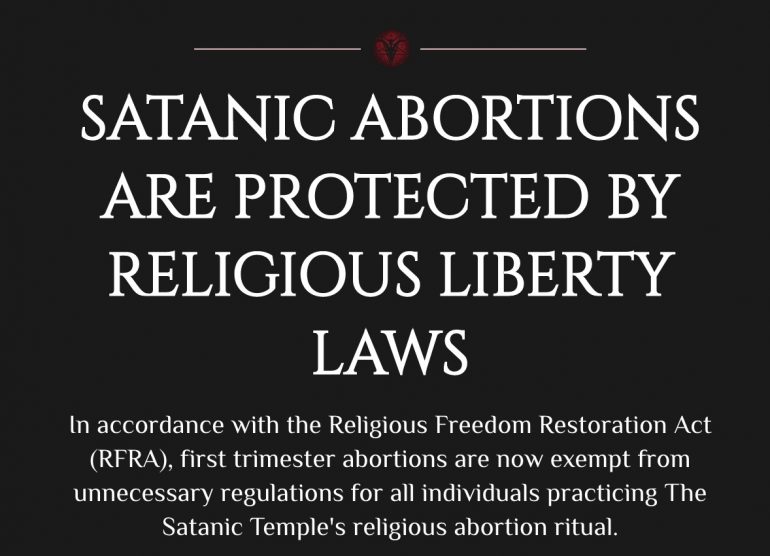 They come out and explicitly embrace the very same criticism we have been leveling at the left for years… that the left’s obsession with abortion, and scream-at-the-sky rage at anyone who does not share that obsession … has more of the characteristics of religious devotion than political interest.

It is, in a sense, the closest thing the Secular left has to a religious sacrament because even when people claim to reject religion wholesale, we simply shift the central devotion common to us all to some other object of our affection — like money, popularity, materialism, or power politics.

Not surprising when you stop to realize the Democrats now go zero-for-ten in their support for the Ten Commandments.

Satanists have identified that leftist religious impulse and hijacked it for their own PR and branding purposes.

They expect us to forget that these are the same clods whose founding documents are cribbed from what has been described as both explicitly racist and shockingly violent Darwinistic book from the 1890s.

Portions of Might Is Right comprise the vast majority of The Book of Satan in Anton LaVey’s 1969 The Satanic Bible, the founding document of the Church of Satan. Though it is no longer included in current printings of The Satanic Bible, early printings included an extensive dedication to various people whom LaVey recognized as influences, including Ragnar Redbeard.

Santino William Legan, the perpetrator of the 2019 Gilroy Garlic Festival shooting in Gilroy, California, mentioned Might is Right in an Instagram post. The work is regularly cited by white supremacist groups online. —Wiki

News flash Satanists, even if we’re living in an upside-down world that calls good evil and evil good, siding with Santan is not a winning issue whether you’re talking about living in the here-and-now, or in the hereafter.