Wait… is the Biden administration talking about bringing the “back alley” abortions into tents on federal land?

No wonder they moved away from “safe, legal, and rare.”

What happens if there are complications (which can occur with any procedure) when a woman goes to some abortion “tent” to surgically remove her child? Will they have a chopper on stand-by for airlifting a patient to the nearest hospital if she starts hemorrhaging?

The idea of Planned Parenthood clinics or “abortion tents” on the edges of national parks had been floated by Senator Elizabeth “Fauxcahontas” Warren (D-MA) to a WaPo reporter.

I just spoke with @ewarren, who suggested the Biden administration establish Planned Parenthood outposts on the edges of national parks.

“They could put up tents, have trained personnel — and be there to help people who need it.”

Fauxcahontas is big mad that the Supreme Court returned the decision (and debate) about abortion to the state legislatures instead of wrenching the issue from people and putting the United States in the august company of the handful of countries with the most lax laws on elective abortion in the world, namely, China, North Korea, Vietnam, Singapore, Canada, and the Netherlands.

My statement on the Supreme Court overturning #RoeVWade: pic.twitter.com/a3iEBTuctv

Rep. Alexandria Ocasio-Cortez (D-NY) said something similar saying that it would be the “babiest of baby steps”, (a rather unfortunate phrase considering the subject matter,) to protect the Progressive Sacrament to sacrifice unborn children on the altar of self.

When announcing the new website on “abortion rights”, Health and Human Services Secretary Xavier Becerra said, “There is no magic bullet, but if there is something we can do, we will find it and we will do it at HHS.”

To be fair to Becerra, he didn’t exactly green light the idea of tents in national parks, but he did say that they are considering carving out federal land to continue to provide abortion and that a number of ideas are “on the table.”

This should be interesting since the entire premise of the Dobbs decision was that the laws on abortion should rest with “We The People” and not the Supreme Court or the Executive branch of the federal government.

The Dobbs case was based on the state of Mississippi’s Gestational Age Act which would place a limit on elective abortions at 15 weeks. Jackson Women’s Health Organization, an abortion provider, insisted that the precedents set by Roe v. Wade and Planned Parenthood v. Casey enshrined a constitutional right to abortion and the 15-week ban would violate that right. Essentially, this position insists that a Supreme Court decision from 1973 that was reaffirmed in 1992 would prevent duly elected state representatives from setting a limit on abortion — even if that’s what their constituents wanted — because it was below the age of fetal viability outside the womb, a standard set by Casey. Meanwhile, other states would be permitted to expand abortion to the moment of birth under those precedents.

Both Roe and Casey enshrined a “culture of death” that made any discussion of the protection of life and the personhood of the unborn at any stage prior to 20 weeks impossible. This is despite polling that shows that most Americans think that abortion should be illegal farther along in a pregnancy. According to a Pew Research poll, the further along in a pregnancy, the less likely people are to support abortion. The tipping point seems to be at around 14 weeks  — a week earlier than the limit that the Mississippi legislature was challenged on in the Dobbs case.

But Libs don’t seem to realize that the Dobbs decision doesn’t mean that abortion is now illegal in the United States.

While some states like Louisiana have abortion bans in effect that were “triggered” by the overturning of Roe, many other states have laws that will continue to allow abortion on demand well into the second or even third trimester, which keeps them in the same company as the 6 countries previously mentioned that allow access to elective abortion past 20 weeks.

It’s funny, though.. doesn’t the left want the U.S. to be more like Europe?

Well, we’ve got some bad news for the lefties… large swaths of Europe have laws in line with the 15-week ban on abortion that the Dobbs case was pushing for. 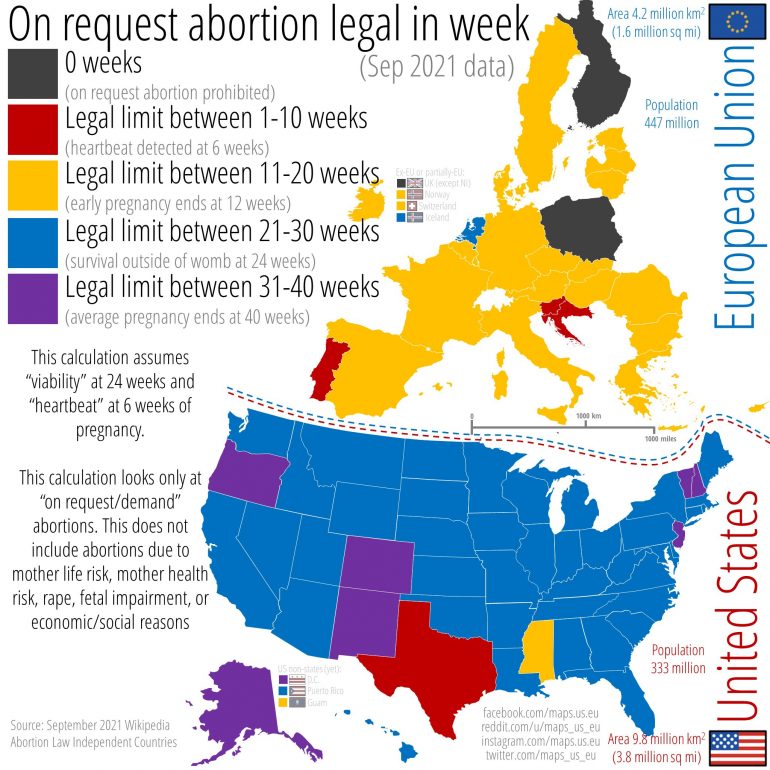 While the left from all over the world wring their hands about how “extreme” the Dobbs decision is, just know that they’re either ignorant or lying. The only thing “extreme” about abortion in the United States is that so permissive that it’s an outlier in the world.

Now the real pro-life work begins at the state levels. Buckle up and pray up… it’s going to get really rough.