The year-over-year inflation rate is even higher than experts had predicted. So much for the White House’s “transitory inflation” talking point.

The Bureau of Labor Statistics reports that the Consumer Price Index for all Urban Consumers rose by 1.3% in the month of June bringing the 12-month inflation rate to 9.1%, the highest rate in 41 years.

The consumer price index, a broad measure of everyday goods and services, soared 9.1% from a year ago, above the 8.8% Dow Jones estimate. That marked another month of the fastest pace for inflation going back to December 1981.

Taken together, the numbers seemed to counter the narrative that inflation may be peaking, as the gains were based across a variety of categories.
Source: CNBC News

Americans have seen that the price of everything is going up, but the new report shows just how sharply prices have increased year-over-year.

A few highlights include:

“MUCH hotter than expected” pic.twitter.com/X1rcy8gVJs

Meanwhile, the White House is peeing on your leg and telling you that it’s raining.

…White House officials began a campaign to spin the numbers before they were released – with top Biden economic advisers Brian Deese and Cecilia Rouse noting in a memo that the data “will largely not reflect the substantial declines in gas prices we’ve seen since the middle of June.”

White House Press Secretary Karine Jean-Pierre also warned that the “headline number” for the CPI – meaning its reading with the price of volatile food and energy prices included – was likely to be “highly elevated” due to the gas prices.

There are some signs that inflation is nearing its peak after months of increases. The national average gas price has fallen steadily in recent weeks, dropping to $4.631 per gallon on Wednesday after reaching an all-time high of $5.016 on June 14.

This “There’s nothing to see here” line is being echoed by the man who is Always Wrong On Everything™ New York Times columnist, Paul Krugman, who astoundingly won a Pulitzer Prize in Economic Sciences in 2008.

Agree with this thread — today’s hot inflation number is already out of date, not reflecting falling gasoline prices and other factors that have recently gone into reverse. But hard to imagine that the Fed won’t hike by 75 anyway 1/ https://t.co/aBm3TyqY5x

If it signals a more dovish turn if, as Josh and I both expect, underlying inflation looks better by the next FOMC meeting, not too much damage will have been done. Markets pricing in much slower inflation looking forward; if this starts to show in real data, we’ll be OK 3/

It’s unbelievable that that guy is still taken seriously.

President Biden insists that inflation in the United States isn’t as bad as it is elsewhere.

“MUCH hotter than expected” pic.twitter.com/X1rcy8gVJs

A Pew Research report just a couple of weeks ago reveals that there are several G7 countries that have lower inflation rates than the United States. 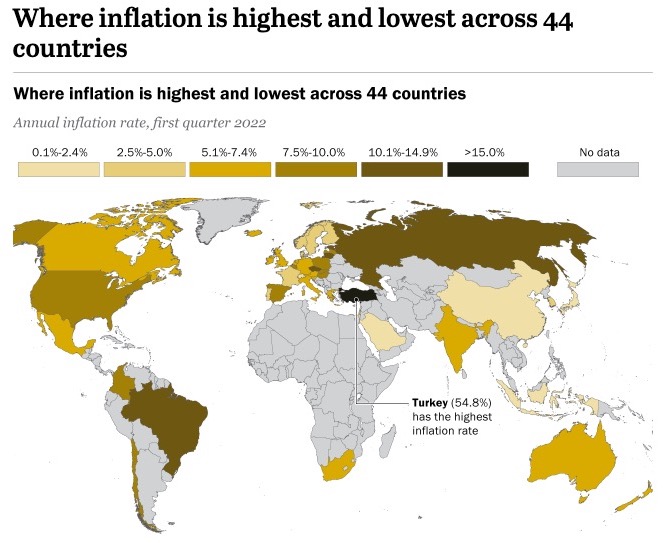 But as he dismisses inflation as not really a big deal, it’s also because of the Supervillain Vladimir Putin who has raised the cost of living for all Americans and the world with his evil, evil ways.

“We’ve got a long way to go because of inflation, because of,I call it, ‘The Putin Tax Increase.'” pic.twitter.com/kJpoUlzjX7

Except… inflation began before Russia invaded Ukraine. It was shortly after Biden took office and ended energy independence, paid people to stay at home instead of go back to work, and increased government spending to insane levels while printing money.

Biden was very clear that his “Build Back Better” agenda would make gasoline prices — and the cost of anything that was reliant on gasoline vehicles for transport — increase. It’s a feature, not a bug in the Big Green agenda.

While the war in Ukraine is having an effect on rising costs of fuel and grain, the spike in inflation can largely be attributed to the policy decisions and priorities of this administration.

They don’t really care if you’re suffering because it’s for the “greater good” for Mother Gaia.

Remember, they’re the “experts” and we all know that we need to trust the experts…

Trust the inflation experts, guys. This is absolutely devastating for the clueless Biden administration. Biden’s presidency would have been far better if he’d pulled a Costanza and just done the exact opposite of everything he thought he should do: pic.twitter.com/m0a01kSvDh

Congrats to the Biden-Harris administration for a new 41-year record!

This is your moment, enjoy it. 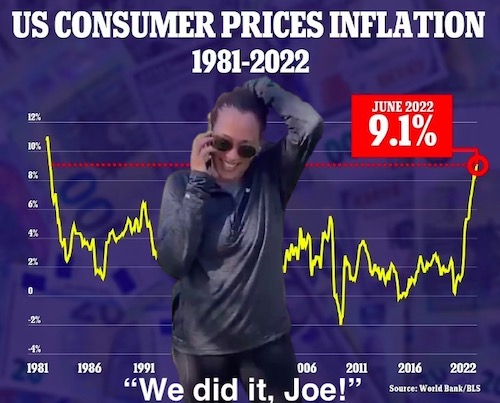 "We did it Joe" pic.twitter.com/dkdsTlbiQ6

Inflation by category is not very comforting from the US CPI report:

If you’re wondering what the big issue is going to be for the midterms… this impacts everyone.

Oh, and… good luck in the midterms!