Biden has given us so many sketchy subversives that it’s hard to keep score, and this one is a bit player. The thing that made him infamous is pretty hard to forget, but THIS revelation is so much worse.

As of this year, Samuel Brinton has been in the role of Deputy Assistant Secretary of Spent Fuel and Waste Disposition in the Office of Nuclear Energy. That’s not the memorable part. To most of us that would just make him another stuffed shirt with a title.

More memorable is that his personal life came up in the vetting process. It’s almost cliche in 2022 to talk about the attention-seeking statements he’s made by combining facial hair with lipstick, and flashy dresses.

But even now some things, like photos of him with people in dog-themed bondage gear, can still be seen as shocking by someone hoping to be taken seriously. 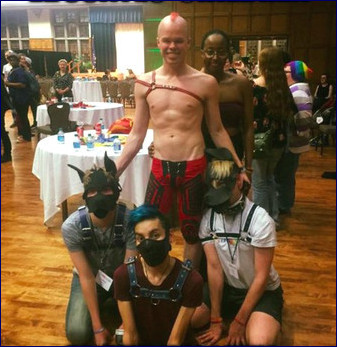 Some might call these clues a red flag. A quick websearch for his bio gives this Wiki short summary: Occupation: Nuclear engineer, LGBTQ activist.

That last part of his bio most likely gave him the edge over other candidates being considered for the same post. This is the Biden administration, which self-consciously priorities superficial traits and politics of a candidate above their core competencies. Which explains Biden’s track record.

Now we know a little more about him, thanks to a report by the National Pulse… something even some of the more ardent activists might find distubing.

He spoke out about a website that offered the sexual services of young males. Staff complained that not enough was being done to vet the age of the boys being hired, and the site owner eventually pled guilty to prostitution charges.

In an article published on September 15th [2015] on the pro-LGBT+ website Advocate, Biden’s latest top nuclear hire dives into a defense of the “Rentboy.com” website, which shuttered following an August 2015 illegal prostitution raid. “Rentboy” is a colloquial term for young men who have sex with older men in exchange for money, often under dubious circumstances.

It detailed how Rentboy employees described the age verification process as a “gray area,” as they “did not always remove advertisements when the advertisers failed to provide identification.” — NationalPulse

So it seems this now-defunct website was selling sex internationally and wasn’t overly concerned about whether minors were involved in the transaction. What does this have to do with Biden’s appointee?

We have him putting the priorities of his activism ahead of the law… which is a problem that has marked many departments of the Biden Administration.

Despite the deeply concerning developments, Brinton wrote in defense of the website:

“…sex work disproportionately affects the LGBT community. Transgender people engage in sex work at a rate 10 times that of cisgender (nontrans) women. And many LGBT youth engage in sex work just to survive. A 2013 Center for American Progress report suggests that LGBT youth are more than three times as likely to have engaged in survival sex.”– NationalPulse

Brinton is upset and specifically claimed the end of a website that allows men to prey on underage boys is worse than the sex trafficking that site was being used to facilitate. He goes on to say:

“The federal government’s recent attack on Rentboy.com is a devastating assault on some of the most vulnerable members of our community — young adults who, for the first time in their lives, were able to earn a secure living safely through Rentboy after surviving family rejection and homelessness because of their sexual orientation or gender identity,” begins the article.

“Rentboy.com may or may not have broken the law. I don’t know,” concedes Brinton, adding “but I do know, from the frantic emails filling my inbox, that the raid on its headquarters has thrown many gay, bisexual, and transgender young adults into turmoil as their main source of income has been ripped away due to irresponsible and archaic views of sex work.” — NationalPulse

The original National Pulse piece goes into much more sordid detail about Brinton than we are prepared to include here.

If this guy worked with a Church or could be connected to a prominent conservative business or charity, these statements would be held up as evidence to personally destroy the man who said it, and disparage the group to which he belonged.

But when you say such things as a member of the activist media’s current favored class, nobody is supposed to even question it.