The government response to this FOIA request was un-dirty-word-believable.

Vicky Spit’s fiancé Zion, 48, died just a few days after he received his first dose of the COVID-19 vaccine in March 2021. Both were musicians in good health and were not tremendously concerned about contracting the virus… but then the “nudging” began. Music venues began to require proof of vaccination for entry, vaccine passports were being discussed, and the government insisted that the vaccines were necessary for preventing healthy people from spreading the virus to the vulnerable. Besides, the vaccines were “safe and effective” and the media and government officials insisted that the jabs would stop transmission and end the pandemic.

Zion received his shot in May 2021 and died just a few days later. His death certificate confirmed that his cause of death was from the AstraZeneca vaccine.

After Zion’s death, Vicky was the first person in the United Kingdom to receive a tax-free one-time payment through the 1979 Vaccine Damage Payment Scheme which is available to anyone who has become disabled as a result of vaccination or for a family member of those who died because of it.

It took over a year to receive the payment that one medical negligence attorney said: “fails to reflect and remediate the full economic impact of her fiancé’s death.”

Vikki Spit’s former rock singer fiancé Zion, 48, of Alston, Cumbria, fell ill eight days after he had his injection and died in May 2021.

She was awarded the maximum settlement of £120,000 but said it was not enough.

The 38-year-old said she had got into debt after losing Zion’s earnings and should have had closer to £180,000.
Source: BBC News

The one-time payment is maxed out at £120,000 (approx. $144,000 in U.S. dollars) and hasn’t been adjusted for inflation since the implementation of the program. Critically, the payout does not prevent taking legal action for disability or wrongful death.

Vicky wanted to know if there was any way to hold Big Pharma accountable for the death of her partner of 21 years. She said that in her reasoning, if the vaccine manufacturers knew of the risks from the jabs and didn’t disclose them to the government, that could void the liability shield and she would be free to sue for damages.

She wrote to the Department for Business, Energy & Industrial Strategy noting that they will not release the terms of the agreement that they made with AstraZeneca granting them a liability shield and asking for details of what would make the indemnity null and void “for example, faulty or incomplete trial data.”

The response to her Freedom of information request was jaw-dropping — the government said that they had the information she requested but wouldn’t give it to her because it could undermine trust in vaccines, would affect the vaccine manufacturers and the Government’s commercial interests, and “adversely impact current or future business.”

Vicky Spit was recently interviewed by Maajid Nawaz on his Odysee podcast where she explains what happened.

Vicky: “They have literally said…we know things that if we told the public they wouldn’t want to get these vaccines so we’re NOT GOING TO TELL YOU” https://t.co/0NoOXhqalU pic.twitter.com/AYZEdqMAqq

Here are screenshots of the letter. 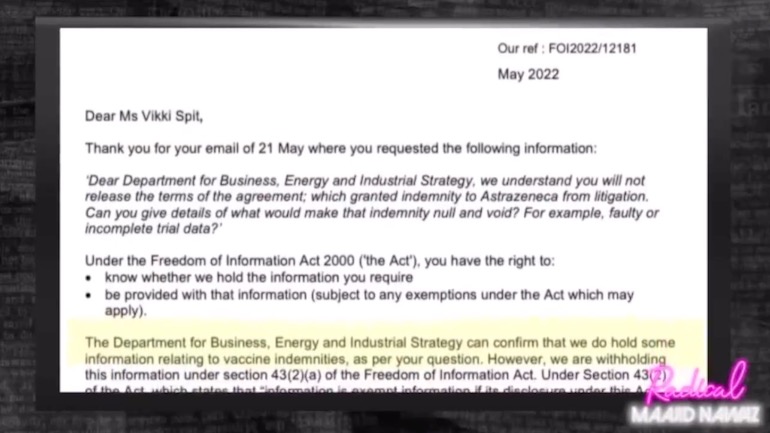 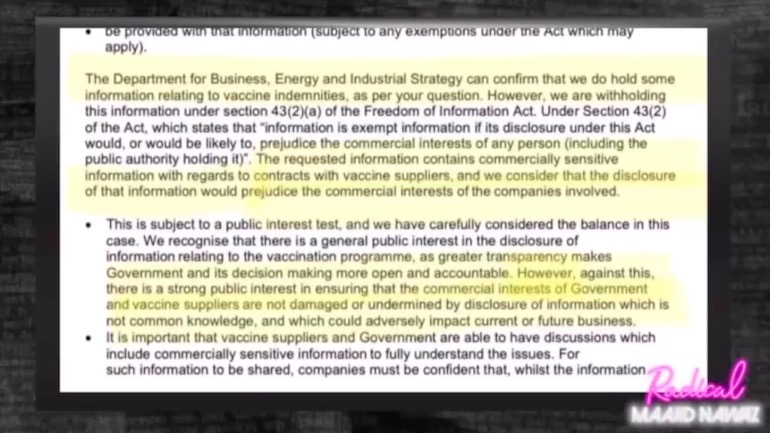 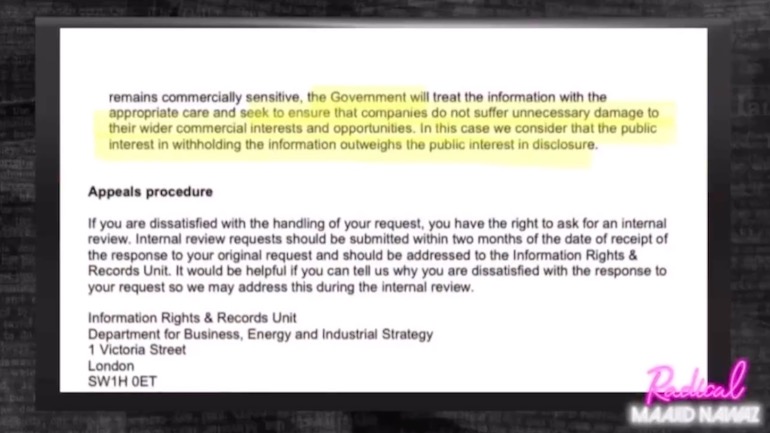 The AstraZeneca vaccine was not approved for use in the United States, but it’s pretty clear from the Pfizer document dumps that the data that they used has been pretty sketchy — especially when it comes to approving the “shots for tots” and jabs for young men where the data shows far more risk than reward for those particular groups.

The collusion between Big Pharma and Big Government is extremely disturbing and should concern every single one of us.

Watch the full episode of “Radical with Maajid Nawaz” here: