The answer is simple. Even with the administration’s penchant for creativity with truth — they just can’t do it.

The reality of inflation is difficult to deny when people feel it every time they go to the grocery store.

Last year, the White House was trying to pat themselves on the back about the “Booming Biden Economy” by telling Americans that they could save a whole $0.16 on a weird July 4 BBQ menu.

The message clearly was that the peasants should be grateful for the crumbs that “The Big Guy” has tossed them.

Even if you don’t serve canned baked beans and pork chops at your Independence Day BBQ this year, you’ve probably noticed that the prices were just a wee bit higher than they were last year as they touted that $0.16 savings.

According to the Farm Bureau, the cost of a July 4 BBQ will be up around $10 this year.

The Farm Bureau reports that your July 4th cookout will cost 17% – or roughly $10 – more than last year. pic.twitter.com/HcZQLk7A4M 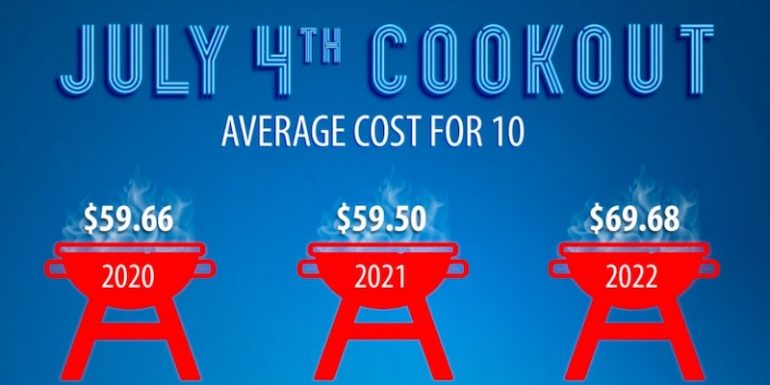 Students for Liberty and the GOP compared the costs from the menu that the White House used in 2021 to the same products today.

Thanks to inflation, the cost of this year's July 4th cookout is up 17% compared to 2021. pic.twitter.com/ZGt3CixNtV

Last year: The Biden White House touted $0.16 in savings for a 4th of July BBQ.

This year: That same 4th of July BBQ will cost Americans $10.18 MORE. pic.twitter.com/FU7MRnyUN9

The Biden administration continues to make life more expensive for you on every front and tries to blame it all on Vladimir Putin.

But hey, at least he has some inspiring words about this Great Nation…

As you celebrate the 4th tomorrow, remember our President's inspiring words about this great nation. pic.twitter.com/EcNoXNuY8l

How did this guy get elected?!

For the sake of the country we’ve got to vote this guy out in 2024.

From the ClashDaily team — Happy Independence Day everyone!