Canadian politicians have taken precisely the wrong lessons from their international humiliation after their mishandling of the Freedom Convoy trucker’s protest in February. They’re doubling down.

Thanks to a compliant state-owned media, together with government largesse to the ‘independent’ media voices Trudeau’s liberals have a total lock on the media narrative.

And yet, Trudeau’s Liberals (and his allies in lower levels of government) are deathly afraid of what they cannot control — the voice of the people themselves.

So they are doing what they do best… demeaning and silencing Canadians with whom they disagree.

It began with the re-arrest of one of the leaders of the Freedom Convoy, supposedly on breech of bail conditions earlier this week. Her bail hearing will be on Tuesday, so she just ‘happens’ to be in custody through the Canada Day weekend.

Then Ottawa’s Mayor Watson dropped some dire warnings for anyone who would DARE to protest on Canada Day.

After all, Canada’s Charter of Rights And Freedoms was already suspended once this year without consequence to the Liberal Government, it’s obviously not worth the parchment it’s printed on. 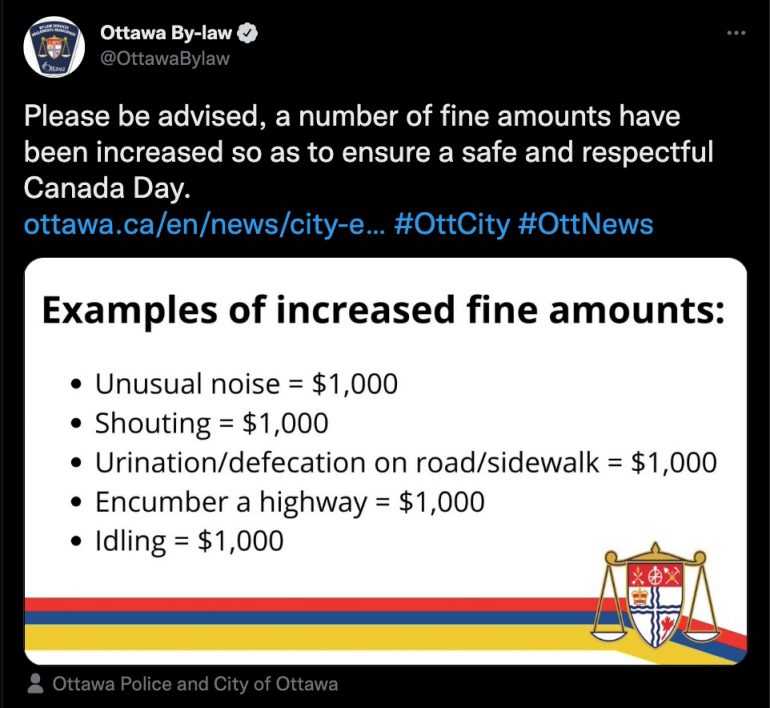 Oh, and there are checkpoints now in front of Parliament Hill which is roughly Canada’s answer to D.C.’s National Mall. What are they checking for?

Police checkpoint in Ottawa, searching citizens on Canada Day:”It’s just to make sure people don’t come with a flag.”

“So we are not allowed to go on the Hill with a flag?”

“No, we don’t want objects that can serve as weapons or to protest.” pic.twitter.com/Z74IUbLlBh

There is some good news to report, though.

The veteran who walked 2670 miles from the Pacific to the Tomb Of The Unknown Soldier in protest to the Vax mandates that cost him not one but two jobs has reached his destination.

Veteran James Topp arrives at the Tomb of the Unknown Soldier in Ottawa, ending his 4000km march across Canada. pic.twitter.com/0ruEhYF9Es

Now seems a good time to look back on a Justin Trudeau quote from long before he took office as Prime Minister:

Liberal Leader Justin Trudeau met with criticism for the second time in as many days Friday, after telling a Toronto fundraising crowd that he admired China’s “basic dictatorship.”

Speaking to a sold-out crowd of women, Trudeau was responding to a question about which nation’s administration he most admired.

The Liberal leader said: “There’s a level of admiration I actually have for China because their basic dictatorship is allowing them to actually turn their economy around on a dime and say, ‘We need to go green … we need to start investing in solar.’” —CTVNews, 2013

What’s that saying the left is so fond of? Oh, yes: when someone tells you who they are, believe them.