Now that the Dobbs Decision has become the rule of the land, Democrats are scrambling for a way forward that will force every state to adopt the permissive abortion attitudes of New York or Vermont.

The fact that this has been determined to be the domain of individual states will do nothing to slow down their top-down big-government autocratic instincts. They have a particular vision of America and come hell or high water they WILL inflict that vision on as many people as they can.

One of the experts called up to address the Senate Judiciary Committee in the ‘what’s next’ question to Roe being shut down was a law professor from UC Berkley, professor Khiara M. Bridges.

The left thinks her handling of these questions revealed everything that is wrong with attitudes on the Right. Social media and the leftosphere have already begun their ‘yass queen’ cheering.

The right thinks Hawley’s handling of this series of questions did the opposite — revealing everything that is wrong with the attitudes of the political Left.

There were two issues addressed in these two short clips. One involved the professor’s novel use of language and whether it was consistent with framing the abortion question as a women’s rights issue. The other concerned the value of the unborn child in the womb.

Each side did a pretty good job of showing the world what values they hold to, but we do notice that the professor completely sidestepped an acutal question that was asked about babies.

Here’s the exchange that happened moments before with Cornyn where the witness used the phrase “person with a capacity for pregnancy” 5 times in one minute.pic.twitter.com/eYaOYumYSJ

A born-alive infant has value and worth. Everyone was able to agree on that point. But things broke down on what we think about that same life shortly before being born.

The professor refused to even address the worth of that same child up to the moment before he or she emerges into the daylight and takes that first breath, instead taking that opportunity to elevate the issue she found ‘more interesting’ (as though she was called before the Senate to answer questions of her own choosing and not the ones asked by Senators), and using her time to hurl insults at Senator Hawley. 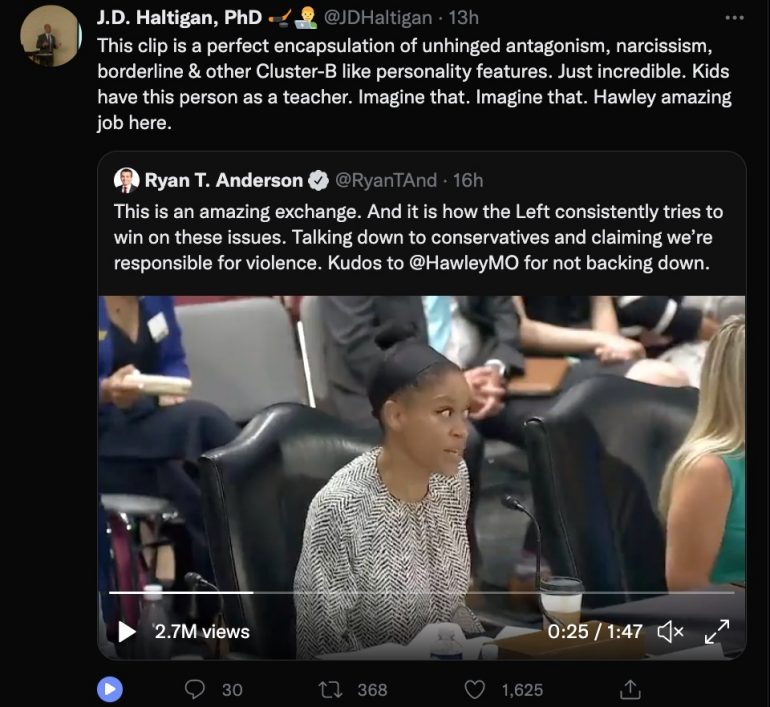 (For anyone wondering: Cluster B is defined here.)

The exchange at the end makes it obvious she thinks she came out on top in this exchange. Hawley’s response, while more subtle, suggests that her answers were a lot more useful to him than her cocksure contempt might appreciate.

If you’ve got a young lady in your life and you’re looking for books with life story examples of strong women who were entirely clear about what being a woman actually meant, you can start and end your search right here.