Compared to this gaggle of clusterf**ks, the old Coward of Broward looks like a flippin’ war hero.

Now we know why the police on scene fought so hard to avoid serious scrutiny over their decisions and especially over the release of video footage.

They knew then what we know now, the enormous procedural and moral failures of the ‘first responders’ milling about just outside of the door from where a psychopath was in no particular hurry while he walked around the classroom picking off 4th-graders.

It’s been a while since their first excuse was exploded. We knew of at least one, and this clips shows at least 3 ballistic shields were there in the hallway with them. They HAD all the tools that were needed to run toward the danger and rescue the kids. What they lacked was leadership and resolve.

The Austin American Statesman released the footage. After describing the gunman’s first actions on entering the building, it describes the police arriving through the same door 3 minutes later.

By the time everyone had shown up, there must have been 20 or more officers of the law many of them kitted up in their full gear, and STILL they stayed away while some beligerant nihilist kept plinkinking away at helpless children.

It is almost three minutes before three officers arrive in the same hallway and rush toward the classrooms, crouching down. Then, a burst of gunfire. One officer grabs the back of his head. They quickly retreat to the end of the hallway, just below a school surveillance camera.

A 77-minute video recording captured from this vantage point, along with body camera footage from one of the responding officers, obtained by the American-Statesman and KVUE, shows in excruciating detail dozens of sworn officers, local, state and federal — heavily armed, clad in body armor, with helmets, some with protective shields — walking back and forth in the hallway, some leaving the camera frame and then reappearing, others training their weapons toward the classroom, talking, making cellphone calls, sending texts and looking at floor plans, but not entering or attempting to enter the classrooms. — Statesman

Unlike the heroes of 9/11, these first responders ran AWAY from the danger to save their own skin. They just weren’t willing to do the hard thing to save the kids. In other words, they made a real decision to risk those children’s lives rather than their own.

Even after hearing at least four additional shots from the classrooms 45 minutes after police arrived on the scene, the officers waited.

They asked for keys to one of the classrooms. (It was unlocked, investigators said later.) They brought tear gas and gas masks. They later carried a sledgehammer. And still, they waited. —Statesman

It gets even more outrageous:

At almost an hour in, one of the officers stops and gets some hand sanitizer from a dispenser. 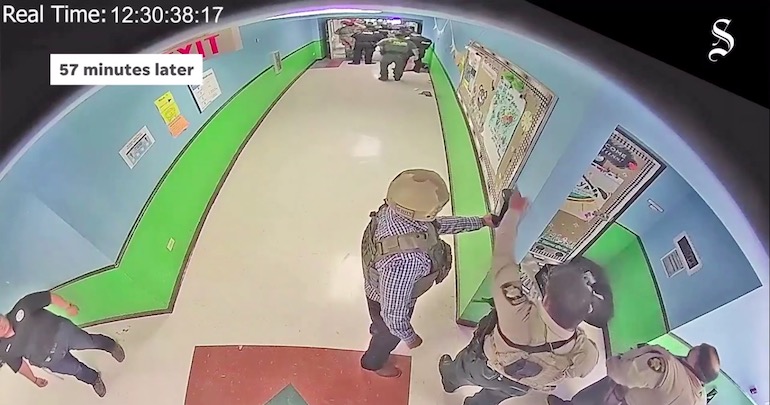 Hand sanitizer? THAT’s what’s top of mind at this moment? What the hell is with that?!

And if a image is worth a thousand words, what’s this one with the guy holding the rest of the police from responding saying? (Note the killer is holed up in a classroom down the hall toward the top of the screen.) 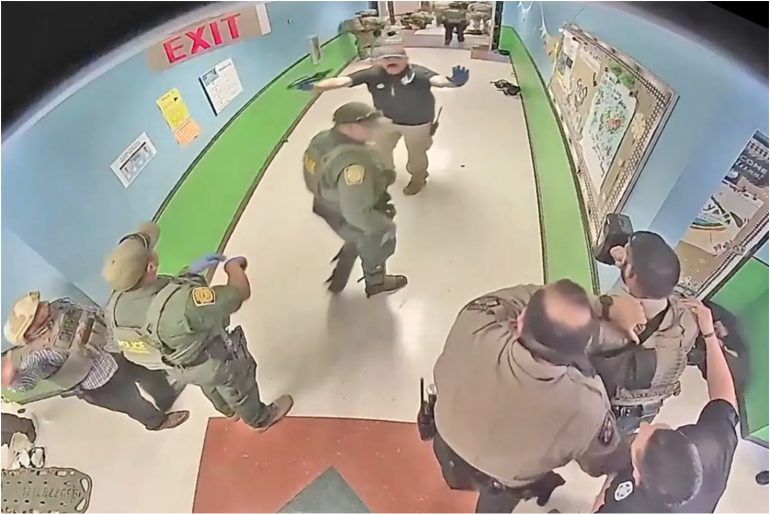 Heavily armed officers are seen in the video walking around in the hallway, leaving, coming back, talking to each other and making calls during precious moments when they could have been trying to thwart Ramos.

…It is not until 77 minutes into the recording that the cops finally breach the classroom where [killer’s name], who died in the attack, had gunned down the innocent kids and teachers.

In one moment during the recording, more than 45 minutes after they arrived on the scene, an officer in a helmet and vest is seen using a wall-mounted hand sanitizer dispenser. That same officer is also seen looking at his phone.

Much has been said about the ‘dangers’ of toxic masculinity. But it sure would have been nice to have some of that in this crowd. Heaven alone knows how many lives might have been saved.