Hunter Biden’s text messages from the Laptop From Hell include some pretty nasty names for his stepmom, “Dr. Jill” Biden.

The text messages that were obtained by The Sun (U.S.) show Hunter Biden lashing out at his stepmother, Jill Biden, in messages to several people within his immediate circle.

In one text to his late brother Beau’s widow, Hallie, – with whom he was romantically involved at the time – Hunter referred to Jill as a “selfish silly entitled c**t.”

He also admitted he had told the now-First Lady to “go f**k yourself” and ridiculed her teaching skills during a row just after Christmas in 2018.

Hallie was encouraging Hunter to check into a rehab clinic to address his drug addiction, while Jill supported her. Hunter was clearly less than pleased with the suggestion. He railed at Hallie and Jill — and his half-sister Ashley for good measure — for pushing him to get help in a series of messages to his uncle James and to Hallie herself.

Joe Biden once told comedian Stephen Colbert that Hunter Biden is “the smartest man I know.”

Hunter seemingly agreed. In a series of messages to his uncle Jim, Hunter recounted how he told “Dr. Jill” that he was smarter than she was.

Exchanging texts with his Uncle Jimmy Biden on December 29, Hunter told how Jill, Hallie, and Hunter’s half-sister, Ashley, 41, had tried to convince Joe, 79, that his son was “in real danger zone” and “a threat to myself and others.”

After proposing that he would stay near his uncle in Pennsylvania and teach, Hunter claimed that Jill rolled her eyes and told him: “Well you’re not going to be doing anything at all for yourself or your family if you just refuse to get sober.”

Raging against her reaction in a further text message to his uncle, Hunter – a graduate of Yale Law School – said he told English teacher Jill he was smarter than her.

He said: “I said Yang ow [you know] what mom you’re a f**king moron. A vindictive moron.

“I suooorted [supported] my GM family including some of the costs you should have used your salary to lay [pay] for – for the last 24 years.

“And you do know the drunkest I’ve ever been is still smarter than you could ever even comprehend and you’re a shut (sic) grammar teacher that wouldn’t survive one class in a ivy graduate program.

“So go f**k yourself Jill let’s all agree I don’t like you anymore than you like me.”
Source: The U.S. Sun

In other messages, Hunter called Jill his “idiot step mother” and says that she “created drama” by insisting that he needs help to deal with his drug addiction.

He also mentions that he’s struggling with his finances and is upset that Hallie hasn’t given him $3000 to pay for rehab. 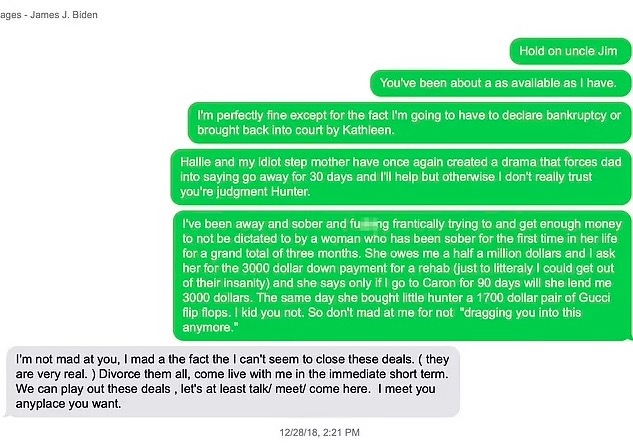 But it wasn’t just Jill that he said nasty things about. He was just as vile to Hallie.

“F*ck my step mother for always being as much of a selfish silly entitled c*nt as you,” he wrote to Hallie angry that she told his stepmother and sister that he had agreed to inpatient care. He then berated Hallie for putting conditions on where he could get help.

She replied, “You are a broken record.”

He then wrote, “I cannot wait to date someone who actually has a brain and a heart and loves me.” He then calls her the “c-word”, a “silly whore”, and a “manipulative bitch.” 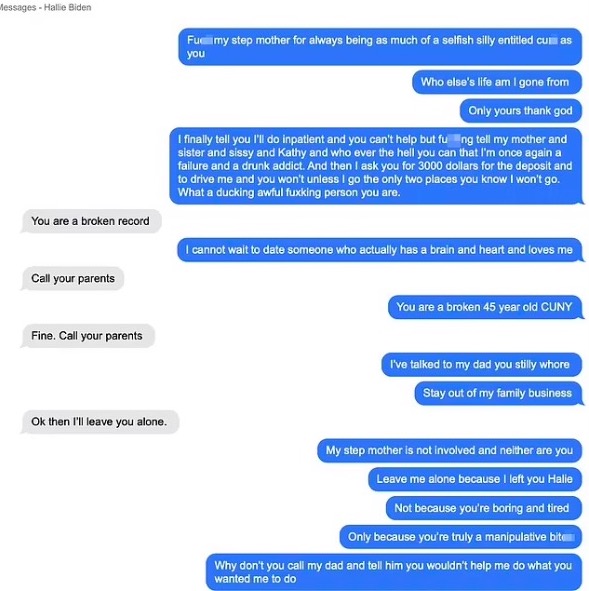 He then shares what his (now disgraced) therapist, Keith Ablow told him about the relationship with Hallie. “I am sure you two have intimacies and pages of your shared life stories that bind you together, but, really, she seems rather ill-equipped ot both love you and command your attention/respect/admiration, etc. You’re avoiding being the chosen one, because you were not the chosen one, by your step-mother.” 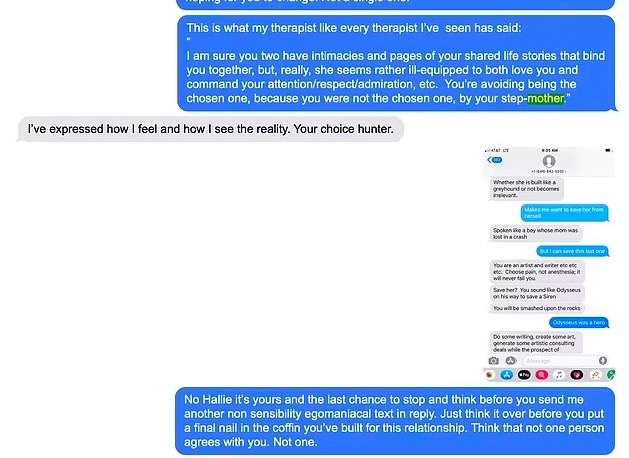 Hunter sent a message to Elizabeth Secundy — Hallie’s older, maried sister that he was exchanging raunchy messages with — where he said that the “detox” he was doing was at the Soho Grand hotel with a Ukrainian hooker.

He then called his mother, half-sister Ashley, and Hallie rodents.

While Hunter mocked his stepmother behind her back, the texts he exchanged with Jill Biden were very different.

While everyone is wondering who it is that is running things while the Shambling Husk of Mediocrity shuffles out every once in a while and Jill Biden gives him cues and fixes his flubs, a new picture of who is in charge is beginning to emerge…

A story in four parts: pic.twitter.com/Xdd1OfJQCT

It’s pretty clear she’s got a lot of power and you don’t want to get on her bad side.

'KNOW WHAT A WOMAN IS': Army suspends retired three-star general over tweet sent to Jill Bidenhttps://t.co/50V5mcJTgm

From Hunter’s crack and sex addiction to Ashley Biden’s creepy diary entries, to Jill’s seeming elder abuse to the entire family refusing to acknowledge Hunter’s daughter with Lunden Roberts to the pay-to-play scheme by what appears to be everyone in Joe’s family — the Biden family seems awful!

Maybe Joe should’ve spent a little more time actually being a father to Hunter rather than just taking “half his income” from his sketchy international business deals as an adult.