This new eco group is growing. They have a special hatred for a special kind of vehicle. And if you think being ‘green’ will protect you, you are badly mistaken.

Earlier this year, a new Eco movement decided the politicians and businesses are taking too long to bend the knee to their will concerning the climate crisis.

This is how they introduced themselves (using the British spelling, ‘Tyre’).

Screenshot from their site:

While the movement’s official strategy involves simply deflating the tires and inconveniencing the drivers to get their message across, that doesn’t mean this is harmless. For example:

‘I got in my car and drove about 10 yards down the road when I noticed a leaflet on the windscreen and thought I must have got a parking ticket.

‘At that point, there were warning lights about the flat as well and I realised what had happened so I drove gingerly about 200 yards so I could park up and thought well I can’t wait around because I’m meant to be meeting movers at 8am.’

Mr Longuet-Higgins says he was forced to drive carefully to the nearest garage but after trying two, was unsuccessful due to faulty pumps and so was forced to call out AA.

He says the ordeal set him and his movers back about two hours and left him out of pocket.

He added: ‘Because I had driven on it, I damaged the tyre so it’s going to cost me £250 to get it replaced. — DailyMail

The news story cited above lists several victims of this tactic who had purchased electric vehicles precisely because they wanted to ‘do their part’ for the planet and are completely confused as to why their electric vehicles were not spared harassment from this group.

They think driving a ‘green’ vehicle makes them one of the ‘good guys’. They forgot the cardinal rule that every revolution will eventually eat its own. It doesn’t matter if they drive a less polluting vehicle than the one they used to have or if they have a legitimate business or personal need for a vehicle that size. If you have an SUV of any kind, for any reason, you are fair game.

It even explains why they think so in their ‘how to’ tips for taking action. 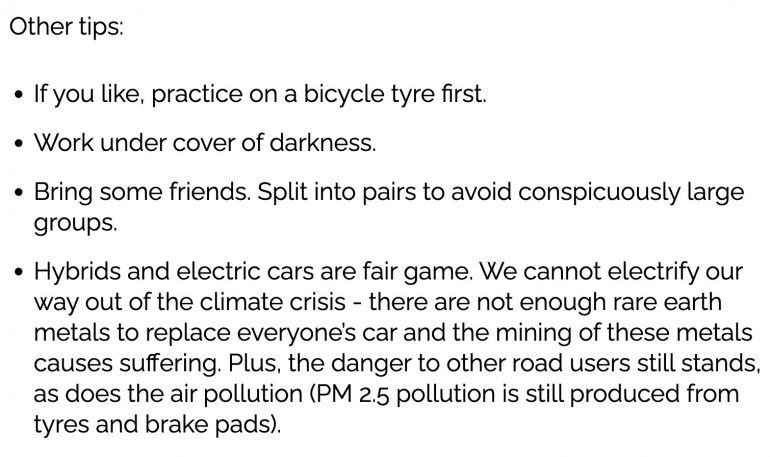 Actually, they may not realize it, but they actually overlooked a point in complaining about electric vehicles: depending on the source of electricity, many of these ‘clean’ cars are actually powered by coal, which is a much more serious pollutant than gasoline.

The group — which may have a connection to the better-known group ‘Extinction Rebellion’ — has landed in the US.

The “Tire Extinguishers” have arrived in the U.S., and if you drive an SUV, they will deflate one of your tires. Late last month (June), they deflated the tires on 40 SUVs on the Upper East Side of NYC. Their website claims they have done the same in Chicago and the Bay area.

… We find it interesting that Hybrid and electric vehicles are not immune from tire deflation. The group feels that the environmental costs of producing and running these large vehicles also hurts the environment.

We (the International Security Driver Association) suggest that if your Executive Vehicle is an SUV, you look at the security of the location where the SUV is garaged when not in use. If you must leave the SUV unattended for any reason, we suggest you look at the tire pressure monitoring system on the vehicle before leaving. They are letting the air out of the tires and not cutting them. Also, if you do not already have one, get a portable air pump.

If your Principal or Executives have family members driving SUVs, you may want to let them know that a deflated tire may be in their future. — International Security Driver Asociation

Other sources have named several other cities joining the movement.

And if you think the American breed of eco-activist is limited to polite action and letting the air out of tires so they can be refilled again later, you’ve not yet learned any lessons from the summer of 2020.

The British may have simply used the valve stem to deflate tires (or ‘tyres’), but the American counterparts who didn’t hesitate to firebomb police vehicles in recent years would have no problem slashing them.

Maybe if we pretend to think this is it’s the work of ‘white supremacists’, Garland’s DOJ will pretend to care.

They have bought into the fear tactics of the eco-narrative and want everyone else to be afraid too.

Beginning in March 2020, many Christians went into lockdown-freak-out mode. Uncut, irrational, unbiblical, and not to mention, unconstitutional, fear gripped many churches and church leaders.