Rival factions on opposite sides of the abortion issue we call ourselves: pro-life and pro-choice. The media is often happy to pick up the left’s derogatory term for the life side ‘anti-choice’.

After stories like this, if they were truly honest, the media would call abortion activists ‘pro-death’. There’s really no way around it.

Minnesota’s department of health has produced their annual report. And a little digging into it shows some horrific information about what really motivates the abortion movement. Spoiler alert: it’s something besides ‘choice’.

Several infants were left to die after being born alive during botched abortions in Minnesota in 2021, according to a state health report.
Abortion procedures resulted in the birth of live infants in five separate incidents, and life-saving measures were not reported to have been used in any of the incidents, the Minnesota Health Department report found.
Two infants were pre-viable and were left to die with no attempts made to save their lives, according to the report. One infant with an unspecified fetal abnormality was also left to die without medical care. —AlphaNews

Here is the report.

The relevant section is on page numbered 30 of this study, under the heading ‘Born Alive Infants Protection Act Report’ which reads as follows:

Someone throws a bag of live puppies in a dumpster to die, and it becomes a national outrage demanding the arrest and punishment of the person who did it. Do approximately the same thing to born-alive human infants, and it’s just another dry medical statistic. The strange silence among the media says a lot about what we really value in this country.

Having survived the ordeal of abortion itself, and taking their first gulp of air, all questions of the mother’s choice became irrelevant.  Her body is no longer part of the moral equation. Minnesota has laws allowing a mother to surrender an unwanted baby without any negative consequence to herself.

Decisions moving forward become a straightforward medical question. Will the health care system abide by the ‘do no harm’ principle when a human life hangs in the balance?

Law requires the tiny abortion survivors to be given full medical care to preserve their little lives. ‘Comfort measures’ while dying is the antithesis of that care. But it IS consistent with the hard-core pro-abortion position for years. For instance, Obama actively opposed Born Alive legislation in Illinois way back in ’03.

The ‘viability’ dodge is hardly a convincing one. Nobody had expected this baby 8.6 oz 23-week-gestation baby to survive. But she did — Hey Dems: New Record For Youngest Baby Born Alive — She’s No ‘Clump of Cells’. Even CNN has accidentally defended the life issue with this headline: An Alabama baby was born less than 1 pound and at 21 weeks. Now he holds a world record.

Once outside of the body, that little life, no matter how committed you are to the pro-abortion position, is no longer a bodily autonomy decision. It becomes an authoritarian decision of who is worthy of getting to live and who is not.

The abortion lobby’s commitment is not to any right of the mother. This is demonstrably true. If it were, they would immediately shift focus on a born-alive baby and try to save the fragile little soul’s life. Their real commitment is to the completion of the violent abortive act, whether that child is still in utero or alive and squirming on a stainless steel table somewhere.

No. The objective is to snuff out that little life, whether it remains in the mother or not.

Their philosophy is not a commitment to a mother’s ‘choice’. Their commitment is to a baby’s death. Thus, it is accurate to call them ‘pro-death’.

Eugenist Margaret Sanger must be so proud of how her white supremacist pro-abortion ideas have taken root. Speaking of Margaret Sanger’s project of eradicating ‘human weeds’, here are a few charts from that study the abortion lobby will not to see in public circulation.

Here are the latest census stats from Minnesota:

And here is the racial breakdown of abortions given in Minnesota. 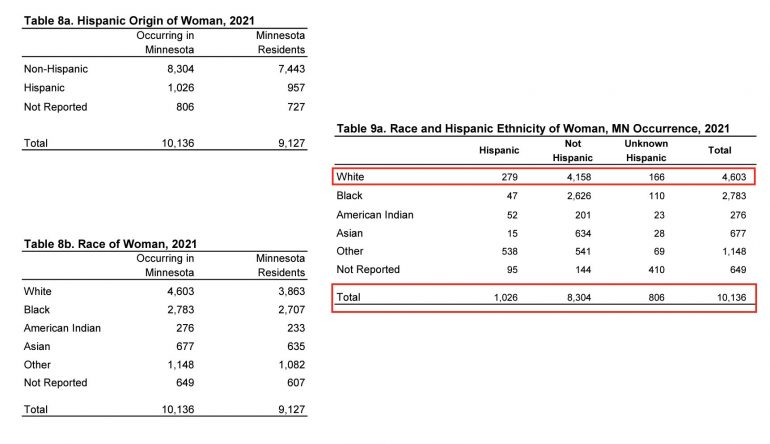 In a state where 61% the total population of the state is white, only 45% of the abortions are performed on white mothers.

This is where we will usually hear objections like poverty, or teenage pregnancy objection explaining away those numbers. 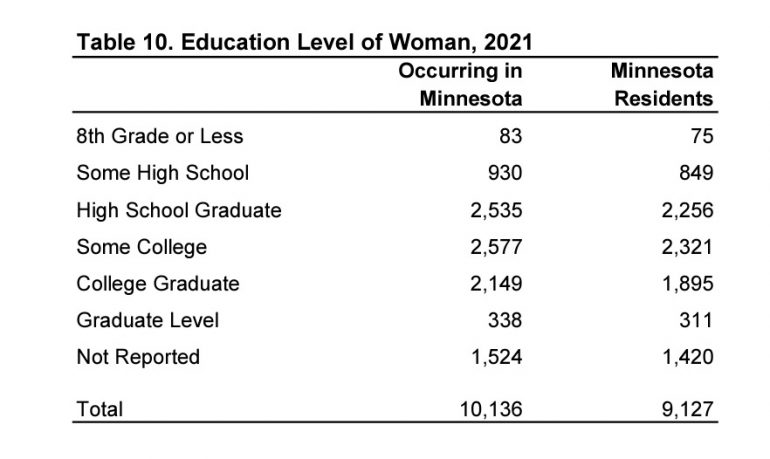 A question was asked about the reason for the abortion. Some 30 percent or so did not give their reason. But have a look at the most common reason given (highlighted in red) contrasted against some of the left’s favorite ‘abortion-is-health-care’ talking points (in blue). 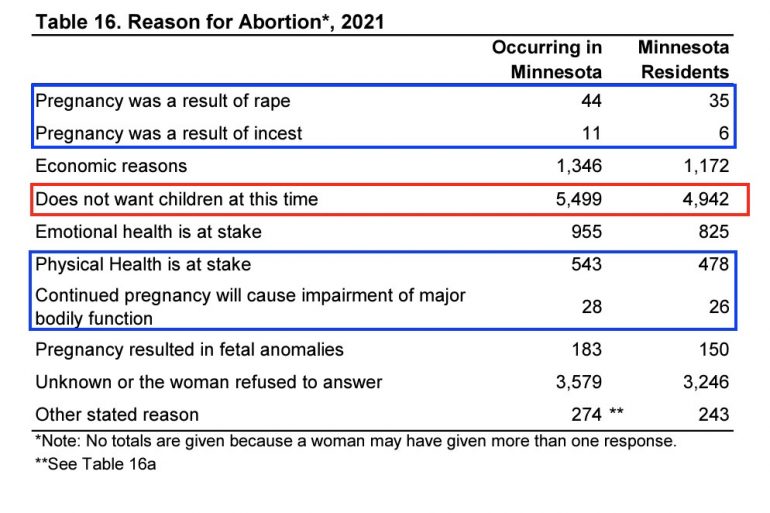 Rape and incest? They accounted for a few dozen incidents out of more than 10,000. Those ghouls are using real-world rape and incest victims as human shields to justify what are in the vast majority of cases, nothing more than abortions of convenience.

You might also call it ‘Retroactive birth control’. If you look into the number of people who are getting their 2nd, 3rd, 4th, 5th abortion or more … that’s what many are using abortion for.

While we’re in the process of BBQing sacred cows, here’s one more.

The statistics inside the red box are the line in the sand over which the activist left have been ready to burn down the Supreme Court and abolish Crisis Pregnancy Centers. 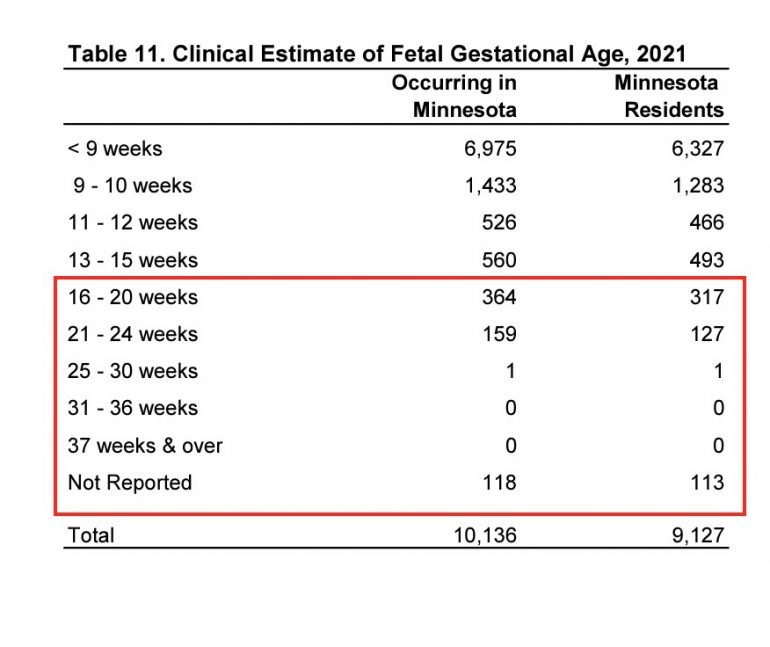 And they try to call OUR SIDE the ‘extremists’.