Is Iran trying to indoctrinate American children to be loyal to the Iranian Regime instead of their own country?

If the video is what it says that it is, then the answer to that is a resounding “yes.”

The Iranian regime has created a new anthem to celebrate the leader of the 1979 Iranian Revolution and they’ve had it translated into multiple languages so that Muslims from all around the world can join in.

The new anthem was written to commemorate the 33rd anniversary of the death of Iran’s first Supreme Leader, Ayatollah Ruhollah Khomeini, which occurred on June 3, 1989.

“The regime hopes that the new anthem’s catchy tune will help win over a new generation. To reach a broad audience, the lyrics have been translated into several languages — part of Iran’s soft power strategy to export the revolution to the countries in the region and even further as far as England,” wrote Azarmehr.

He says that it’s been difficult for the clerics in Iran to express to their children why the revolution was necessary when the country was enjoying a period of unprecedented growth, prosperity, peace, and stability in 1979.

In order to convey to the young generations the zeal of the 1979 revolutionary days, the regime has resorted to making multiple music videos of children born in the last decade, singing the anthem, “Salute Commander.” They give a military salute, pledging their unswerving loyalty to Supreme Leader Ali Khamenei.
The imagery, and the lyrics sung by the children, bring to mind the public displays of loyalty to the “Dear Leader” and the “Great Leader” in North Korea.
The original Persian lyrics of the anthem are heavily ideological: “In spite of my small size, when the time comes I will rise up for you … I am a child but the life of my family and I belong to you.”
The children also raise their right arm and sing: “I make an oath to become your Qassem Soleimani when you need me,” and pledge to become Khamenei’s “nameless soldiers,” a reference to Iran’s intelligence operatives.
In line with Iran’s practice of exporting the revolution, the anthem has been translated into Arabic, Turkish, Azeri, Urdu, Hindi and English.
Source: Kayhan Life

The English version is a watered-down version of the song, with references to Qassem Soleimani removed, but the message remains basically the same.

One line of the song, “We wait under the flag of our leaders,” isn’t likely to be a reference to the Stars and Stripes.

Azaram’s article says that videos of young kids singing the new anthem are being made all over the world. A clip of one of the videos circulating on Twitter on Thursday claims to have been taken in Houston, Texas on July 22.

Azarmehr tweeted out the video and a link to his article.

Each one of these poor children is a potential future sleeper cell in America because the naive authorities can’t tell the difference between religious freedom and political indoctrination 2/2https://t.co/NPey760jXh

It seems legit. The Islamic Education Center of Houston was organizing a “group recitation” for children between the ages of 4-14 according to the website Focus on Western Islamism that posted the photo of the flyer. 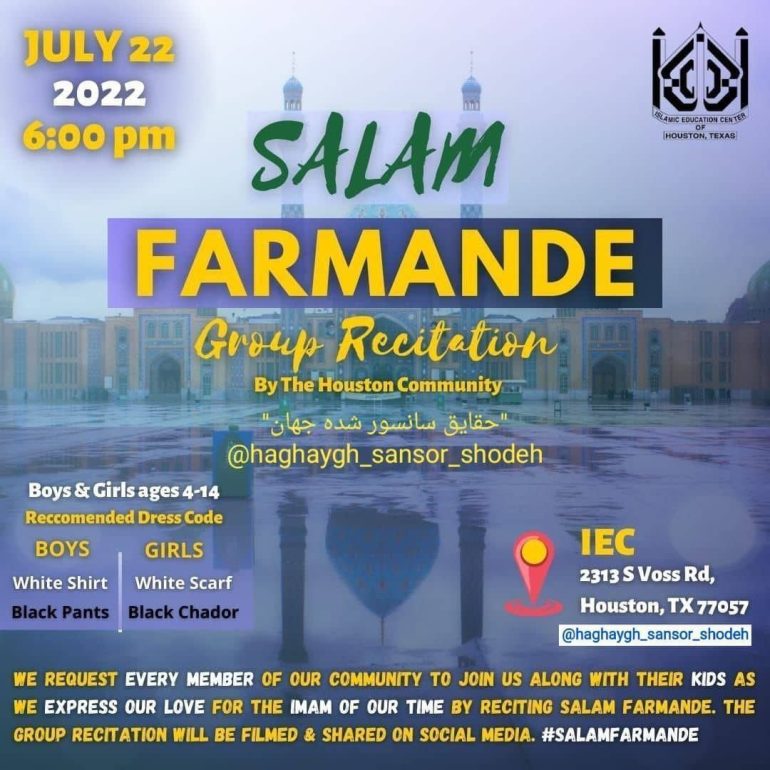 Some Imams in the U.S. appear to be totally on board with praising the not-dead-enough Iranian Revolutionary leader.

The Islamic Center of Houston also posted this brochure that they are hosting an event for families to come together and perform the song. The pop genre of this song is clearly intended to promote the regime’s ideology among kids. pic.twitter.com/mmI5cAY0Fl

The Jerusalem Post says that the song, while in support of the Islamic Republic of Iran, the “Commander” in the video is a reference to a 9th century Imam’s son, Muhammad al-Mahdi, who was hidden from the public as a child for fear of persecution. Shia devotees believe that al-Mahdi will reappear at the end of time.

Shi’ite children in Houston, Texas were seen in a video shared by Iranian media singing a song often used as a sort of religious anthem that also supports the Islamic Republic of Iran while wearing headbands, waving flags and saluting. The children sang the song in English and Persian.
The song, Salam Farmande (Hello Commander), was first published last year in Iran by a group called “Mah” (an abbreviation of the “Nation of Imam Hosayn” in Persian).
The song is written from the perspective of a child singing about his dedication to Muhammad al-Mahdi, a messianic deliverer who according to Islamic belief will fill the earth with justice and equity and redeem Islam. The lyrics describe the child as insisting that despite his young age, he will “sacrifice everything” and serve al-Mahdi…
…According to the Iranian YJC news agency, the creators of the song have stressed that the commander referred to in the song is al-Mahdi.
The children in the video from Houston waved flags reading “O mahdi,” referring to al-Mahdi. The English lyrics do not include the mention of Soleimani, but the Persian lyrics sung by the children do include the allusion to Khamenei.
Source: The Jerusalem Post

Former State Department official, Gabriel, Noronha, who worked as Special Advisor for Iran from 2019-2020 also shared the video noting the rather disturbing lyrics.

Video of the event: hundreds of children in Texas singing lines such as “I make an oath…one day when you need me, I will be your martyr.”pic.twitter.com/c0kFgFpmsA https://t.co/AUtBSKcTe4

Under that video on Twitter, there is a disclaimer of sorts…

Iran’s regime recruiting child soldiers in the US? 27 July 2022: Iran’s state-run Fars News Agency (affiliated to the IRGC) & other outlets have published a video purportedly of kids in Houston, Texas swearing allegiance to the regime’s Supreme Leader

Masih Alinejad, an activist who fights for Iranian women’s rights posted a clip of the video.

Recruiting and brainwashing children to become martyrs for Khamenei, Islamic Republic of Iran’s supreme leader, sanctioned by the US.

This video doesn’t come from Iran. It was filmed in Houston, Texas this month.

This isn’t religious freedom. This is pure fundamentalism. pic.twitter.com/vlHbitJQqw

The reaction on Twitter is generally one of horror, although a few memes are being posted in response like this one:

And one respondent replied in Persian to someone posting the video that the clips of the mosque in Houston have been spliced with other videos from other places to make it look like it was all filmed in Texas.

According to Google translate, the tweet says, “I went to Google to see. There are some scenes that are the same as the picture of the mosque itself. But it may have been assembled with videos from other events. But some of the pictures are for the same mosque in Texas.”

Our “tolerant” society in the West accepts this and if you call out this blatant indoctrination, then you’re labeled as “Islamophobic.”

And what is our cultural answer to this? Let it continue because it’s intolerant not to. Also, denounce the United States as being a uniquely horrible, inequitable, and evil place in the world, have public school teachers talk to Kindergarteners about their gender identity, and call any criticism racist or “phobic” of some sort. That’s the current leftist response.

It would be much easier to combat bad ideas like support for radical Islam if the country was a bit more united. Of course, for that to happen, the left would need to stop hating America and American values so much.