This is the exact issue that Disney went to war with DeSantis over.

DeSantis understood that many parents wanted younger children to retain what has, until about seven minutes ago, been understood as the ‘innocence of children’.

He put forward legislation that would prevent any introduction of sexualized messaging (traditional, non-traditional or otherwise) from being introduced in any form to children in 3rd grade or lower.

The left was enraged by this, using a deliberately misleading name ‘don’t say gay’ to claim it was giving special targeting to the exclusion of non-traditional sexual practices, and Disney (as well as many Democrats, right up to the Oval Office) doubled down their denunciation of DeSantis and the parents for whom he spoke.

Parents pushed back, denouncing anyone demanding that our youngest children be exposed to a sexualized curriculum as following in line with the exact same trajectory that sexual predators aka ‘groomers’ use to lower the defenses of young potential victims they intend to target sexually.

Since then, the war over who teaches what to our children has raged on, with many corporations making their positions known.

Chevrolet has now gotten in on the act, siding with those who want young children to be given a sexualized curriculum, with that curriculum including explosively controversial topics like the challenging of sexual gender norms among children young enough that they haven’t even discovered romantic attraction yet. 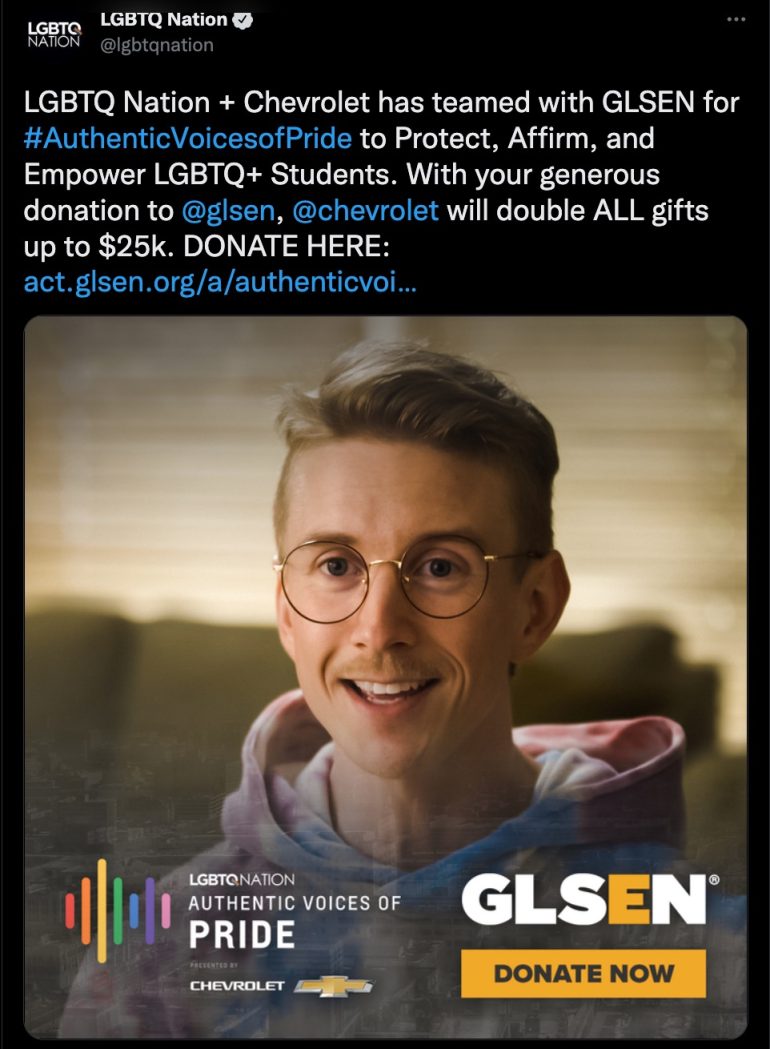 The automobile brand is also inviting LGBTQ influencers to participate in paid advertisement collaborations, like trans activist Madison Werner on instagram, who writes “our friends at chevrolet truly believe lgbtq+ people deserve support everyday of the year.”
GLSEN describes themselves on the About Us page of their site as a group of educators who “play key roles in creating affirming learning environments for LGBTQ youth.” But under the guise of inclusivity and advocacy for human rights, activist groups like GLSEN push for indoctrination of gender ideology in K-12 education.
GLSEN provides Model Local Education Policy, various initiatives to include males into female sport categories, a pronoun form for socially transitioning children on school grounds, with the option to keep it secret from parents, all with the express goals to “activate supportive educators,” “pass and implement LGBTQ-affirming policies,” and “advocate for inclusive and affirming curriculum.” —PostMillenial

The article continues to explain that GLSEN’s inclusivity guides actively undercut the notion of biological binary in which they say the ‘most important thing is to dismantle this polarizing way of thinking’.

This comes at a time when red flags about rushing to introduce existential identity crisis into the already complex life of teenage children, and a medical pushback against minors being sent down a road from which there is no easy return is already growing, particularily in Europe.