This “meeting of the minds” was just what you’d expect — a couple of idiot Biden apologists chatting.

The Useful Idiots are going to continue to insist that the country isn’t in a recession even though we’ve used two consecutive quarters of negative growth to define a recession for nearly 50 years.

The left is trying to redefine what a ‘recession’ is to protect Biden.

As the media rushes to do the same, let’s remember the times they had the definition correct.

Stelter giddily introduces his guest and tees him up (with a girlish giggle) to dismiss the idea that the country is in a recession.

If you can believe it, it got even dumber than that. He says that it’s “partisanship” that is causing all the recession talk and not the six consecutive months of decline in GDP.

CNN’s @brianstelter: “Can we dispense with the recession debate? Are we in a recession, and does the term matter?

Former Enron adviser @PaulKrugman: “No, we aren’t and no, it doesn’t.” pic.twitter.com/jgioebaJZO

Krugman goes on to say that people are “pretty upbeat” about their personal financial situation but concerned about the economy and that this is a failure of the media.

No, really he said that.

Krugman: “If you ask people, ‘How are you doing?’, they’re pretty upbeat … If you ask people ‘How is your financial situation?’, it’s favorable. If you ask them, ‘How is the economy?,’ ‘Oh, it’s terrible.’ That’s a media failing.” pic.twitter.com/90LLYpjZKT

He doesn’t seem to know anyone that is having difficulty making ends meet with high gas prices, groceries costing more, and interest rates increasing.

That claim that gas prices have been “going down” is just ridiculous. It’s still roughly double what it was when Biden took office and throughout the Trump presidency, so… shut up, Paul!

But he won’t shut up, even though he’s been wrong about so very many things — and in the pages of the New York Times, to boot!

Krugman on why he got inflation wrong: “Some of it is stuff clearly no economist could have forecasted. I didn’t know Vladimir Putin was going to invade Ukraine. External events. It does appear the U.S. economy is – a, has a smaller productive capacity than we thought.” pic.twitter.com/LxmiK8JMv1

Krugman said that he tries to admit when he’s wrong. Oh, really?

Did he admit that he was wrong about this doozy from November 2016? 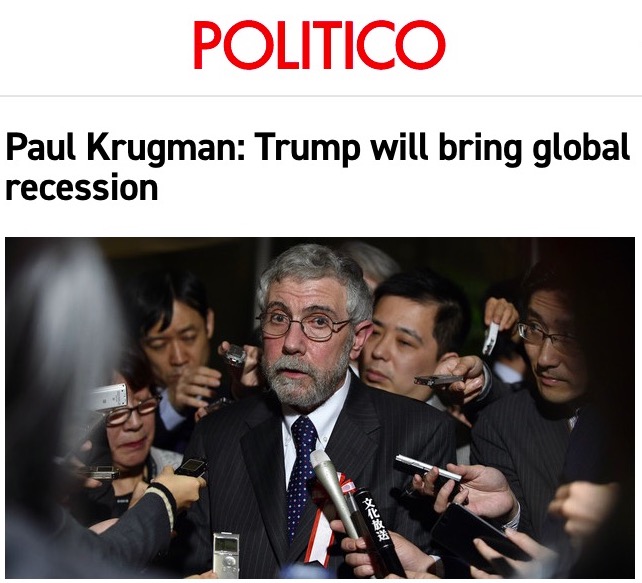 Hard to predict if a recession is coming — but easy to predict Trump team’s response if it does:

What about this one?

Speaking of being wrong about so many, many things, Krugman steps outside the topic of economics to dispel some of the “dystopian myths” about America. The 2020 George Floyd riots weren’t so bad according to Krugman. Oh, and the increase in crime isn’t a big deal, either.

Krugman on “dystopian myths” about America: “The #BlackLivesMatter demonstrations … People thought Manhattan would burn to the ground … Yes there was some arson & looting, but really not much for a country the size of U.S. [N.Y.] is not a burned-out shell. It never happened.” pic.twitter.com/vSEbfa7yF2

Californiaites and New Yorkers have been fleeing their states in droves. Do you think that rising crime rates have nothing to do with that?

Krugman is so out of touch.

Watching them so brazenly re-define how they have always used “recession,” and then Paul Krugman adding it doesn’t matter if we’re in one or not (it doesn’t matter for him), all to protect the Biden WH, is a new level of audacity no matter how low your opinion of them already is: https://t.co/G7UMBgU7Ix

“None of the usual criteria that **real** experts use says that we are in a recession.” – Prof. @paulkrugman

Have you dealt w/ economics professionally as an academic from another field? If not, it’s exactly like this: “Reason, fact, analysis, total bullshit, fact, a lie, fact.” https://t.co/0Rj4NaAQ5a

Steve Cortez asked where Krugman found these people that are “favorable” about their financial situation.

Where is Krugman finding these “people” who are “favorable” on their financial situation?

Columnist David Marcus had an idea…

Krugman apparently did a small survey of voters in the caviar aisle of Citarella, in East Hampton. https://t.co/FhBAmhwneh

But really, we all know that he’d be shouting “Recession” from the rooftops if the Bad Orange Man was still President.

If Trump was still President, Krugman would definitely be saying it’s a recession… https://t.co/1FGZDPoM4c

How it started. How it’s going. pic.twitter.com/vuxhTzXhSs

Paul Krugman told Brian Stelter that we aren’t in a recession today on his show… what’s next, is he going to have a guest come on to tell him he also isn’t fat and bald?

Maybe. Here’s how he teased the Krugman segment.

NYTimes, 6/1/2020: “By morning, the devastation in Manhattan was unlike anything New York had seen since the blackout of 1977. Block after block of boutiques in the Flatiron district had their windows shattered and’ their goods looted.”

By the way, this is how Stelter teased his Krugman interview –> pic.twitter.com/e2JZu0dyXz

They can try gaslighting, but it’s still the economy, stupid.

Even former Obama administration officials are calling out the Biden administration for trying to redefine what a recession is. pic.twitter.com/8ynQ7S99AT

The midterms are coming up and this is what the Biden admin and the Regime Media are going with.