We were told that the DOJ had until noon today to produce the affidavit used for the raid on Trump’s residents, with the relevant redactions.

Judging by the amount of black ink on this document, the entire 7th floor of the FBI should be buzzed on Sharpie markers for days.

Here’s the link to the full document so anyone intent on reading through it yourself.

Before we break into any particulars, we’ll give you a peek at the public reaction to the drop.

Mostly, the political right on social media focused on mocking this ‘most transparent’ administration ever.

BOMBSHELL Revelation in the affidavit pic.twitter.com/VknQCnCYPD

DOJ and FBI are so corrupt that they're redacting their reasons for redactions in their justification for raiding a U.S. president's home.

However much contempt you have for these lawless agencies, it's not nearly enough. pic.twitter.com/dUCOqiYVfP

The left — media and social media alike — were predictably wetting their pants with glee.

There are a total of 38 digital pages in the document drop.

By our quick and dirty count, we see that of those 38 pages, 14 have zero redactions, 2 have only redacted the names of witnesses or agents, 8 have significant redactions with at least a few lines of visible text, and 14 are redacted completely.

Those numbers don’t really tell the full story. That category of 14 with Zero redactions includes 6 pages of a letter from Trump’s team that they submitted as Exhibit 1. And several blocks of the unredacted portion involve statements by Trump to which the DOJ gave a [you guessed it: redacted] response.

So the DOJ gave their Sharpie pens a workout for this document.

We have not forgotten how the FBI manipulated exculpatory information in their attempt to destroy General Flynn by changing one word in an email from a government-generated document that would have served to exonerate him. Despite their legal obligations to produce all exculpatory information that would have benefited Flynn’s defense team, they absolutely refused to do so and only gave it up when his lawyer found third-party evidence that such an email existed.

ClashDaily’s Summary of the Document

We’ll have the opportunity enough to see the guys in bow-ties pore over this document and come back with an in-depth legal analysis. Until then, this can get you started.

Let’s begin with a run-down of what’s on each page so that if our readers DO care to do their own due diligence, they’ll know where to look.

1. Opening page. Describes ‘criminal investigation’ in connection with ’15 boxes’ and ‘NARA Referral’ that was initiated in response to that referral made on Feb 9, 2022.
[Keen observers will note that Joe Biden’s instructions to WAIVE Trump’s Executive privilege came months AFTER this investigation began… blowing a serious credibility hole in Joe’s claims of ignorance. Read Here: DIRTY TRICKS: The Direct Role Biden Played In Stripping Trump’s Protections During FBI Raid]

2. Describes boxes moved to MAL and suggests they were improperly stored and suggests that unauthorized persons may have had access to classified material. It also gives credentials of agent acting as witnesses. They also claim there is ‘probable cause that evidence of obstruction’ will be found on the premisis. [We’ll come back to that point later.]

7. (continued) Header for ‘probable cause’ section.

8. NARA referral said there were ‘a lot of classified records’, interspersed with other records, and not correctly foldered. Discussion of previous NARA interaction with Trump up to that point.

9. Image of a public statement on Trump’s social media account, with the remainder of the text fully redacted.

14. Fully redacted (except for 3 lines describing dates and times of NARA requests)

17. On paragraph describing documents allegedly meeting the classification requirements of interest to the DOJ… followed by half a page of redactions.

19. Half a page redacted — both leading up to and following a reference to Kash Patel’s objection that Trump had, in fact, already declassified the documents in question.

22. Half-page redaction, plus reference to communication between DOJ lawyers and POTUS Lawyers alleging that Mar-A-Lago does not have a secure location for classified documents and that documents on premisis have not been handled correctly.

23. On June 9, 2022, FPOTUS COUNSEL 1 sent an email to DOJ COUNSEL stating, ”I write to acknowledge receipt of this letter.”
The remainder of this page is… (say it with me)
Fully redacted

26. Fully redacted (except to say ‘there is probable cause to believe’ classified docs are there.

29. Mostly redacted, except to allege that particular rooms do not meet requirements for storage of classified docs, and that evidence of the subject offenses (eg: mishandling of classified information) has been stored in multiple locations on the premises (redacted).

30. Laundry list of various rooms. Assertion of belief that probable cause exists for crimes (above) Request for sealing, including the following text that would NEVER accompany an FBI investigation into any Democrat.

It is respectfully requested that this Court issue an order sealing, until further order of the Court, all papers submitted in support of this application, including the application and search warrant. I believe that sealing this document is necessary because the items and information to be seized are relevant to an ongoing investigation and the FBI has not yet identified all potential criminal confederates nor located all evidence related to its investigation. Premature disclosure of the contents of this affidavit and related documents may have a significant and negative impact on the continuing investigation and may severely jeopardize its effectiveness by allowing criminal parties an opportunity to flee, destroy evidence (stored electronically and otherwise), change patterns of behavior, and notify criminal confederates.

32. (continued, including dispute-resolution process of privilege claims)
name of the FBI agent is redacted. 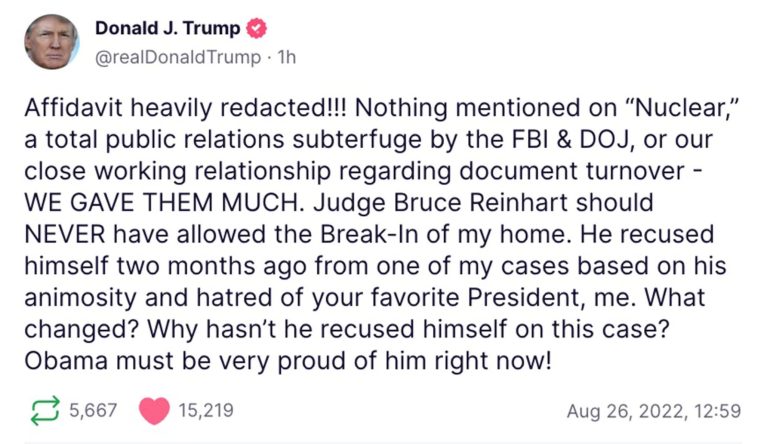 ClashDaily’s First Take on the Document

There are a lot of places here someone could scrutinize and object to. Here are a few that stood out.

2. This does not mention anything about the nature of ‘evidence of obstruction’ they expect to find. It is entirely plausible this was written with the events of January 6th in view… especially since (a) it was well-known that Trump was not interested in voluntary cooperation with the J6 star chamber investigation and (b) the DOJ responded to Liz Cheney’s made-for-Cable J6 Extravaganza by saying the DOJ would take their allegations very seriously. — what a clever workaround to avoid the Presidents’ 4th Amendment protections THAT would be.

31. Of course, neither Trump nor his legal reps were present to observe any of the searches, and we have ample evidence that the current FBI doesn’t give a damn about any curbs on their authority to reach into privileged information, including attorney-client privilege, Executive privilege, or even journalists’ First Amendment rights.

If the owership of documents was contested, with political rivals in an election with plenty of bad blood involved, under a DOJ whose AG had an obvious personal and professional grievance against the target of the investigation (ie: Gorsuch’s SCOTUS seat) disputes of ownership of the documents — especially with both the Bill Clinton sock drawer precedent and the Hillary Clinton illegal server precedent in which Comey claimed there was no ‘intent’ — this contested classification status and dispute over document ownership should have been resolved in court.