Perhaps the Democrats who railed against “Russian interference” in the 2016 election could take a look at what the most popular social media app with ties to the Chinese Communist Party is doing.

Do you remember when the Trump administration was mulling over banning TikTok over national security concerns?

NATIONAL SECURITY: India Bans Popular Chinese Apps Including TikTok, Should We Do The Same?

Well, the United States really should’ve pulled the plug on the Chinese spyware posing as a video-sharing social media app.

Recently, TikTok announced the launch of their “Election Center” to “connect people who engage with election content to authoritative information and sources.”

The question is, can this move by TikTok be trusted?

In a piece in The Federalist, Emily Jashinsky says, “That we’ve forfeited this much control to a hostile foreign power is one of the most mind-boggling, slow-motion political blunders in modern history.”

“TikTok just unveiled an ‘Elections Center’ that will put detailed voter profiles in the hands of a company based in Beijing, stocked with party members and state employees, subject to laws that allow the Chinese government data access,” writes Jashinsky. “Given the Chinese Communist Party’s influence over ByteDance, the parent company of TikTok, China could exercise enormous control over the midterm elections with this data. What’s worse is that American institutions are actively encouraging TikTok to do this.”

While Eric Han, the U.S. Head of Safety for TikTok, insists that the platform is taking the sharing of information on the midterm elections with “the utmost seriousness,” we know that TikTok’s parent company, ByteDance, has close links to a hostile foreign entity — the Chinese Communist Party.

This puts the app in a position to influence elections in a way that benefits China.

ByteDance is required by law to provide data to China upon request. TikTok claims that they would reject the request, but there’s no way to be certain that they wouldn’t hand over whatever data the Chinese Communist Party asks for. Besides, we know that members of the CCP work for ByteDance and that TikTok’s data has been accessed in China.

Jashinsky says that the “Elections Center” will allow the app to influence midterm voters in two ways, “by providing voter information and countering ‘misinformation.’ The first front means TikTok will have voting profiles on all American users who click through the Elections Center, and the second front means a Chinese company will be policing our political discourse on the single most popular social network.”

Here are screenshots from TikTok about their new “election security” measures. 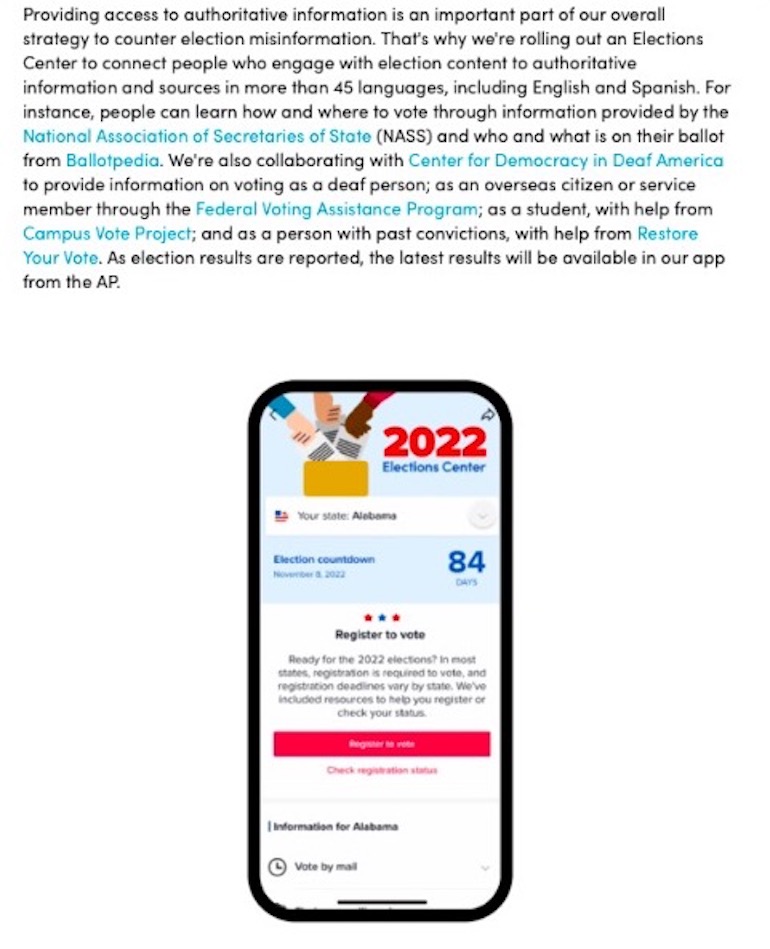 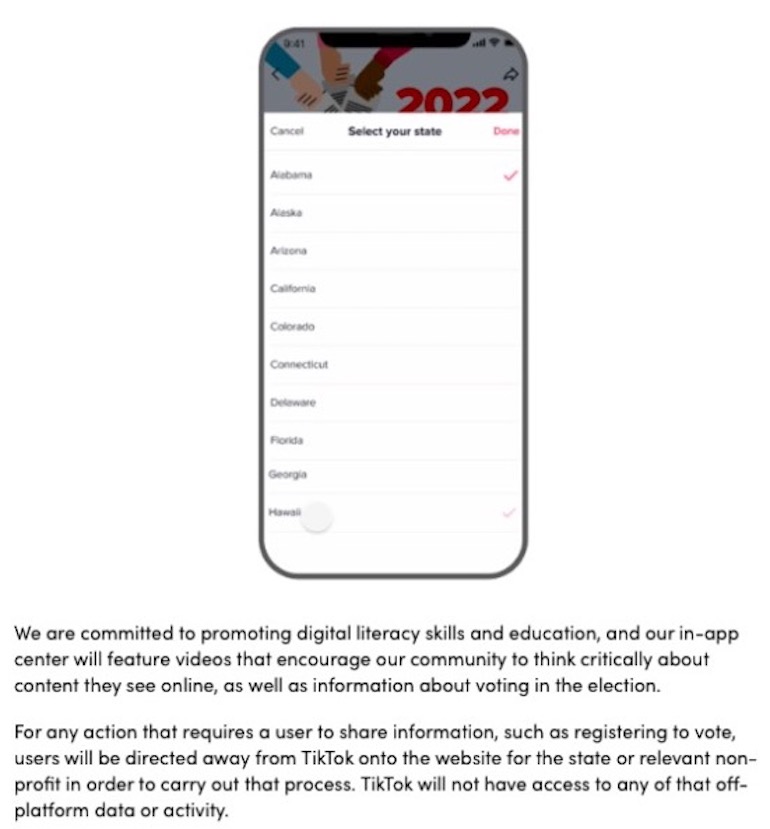 When users put in their location data, TikTok can now push content based on where they live and their app use history to influence their vote.

Tristan Harris of the Center for Humane Technology gave an example, “If China were to invade Taiwan tomorrow, they could up-regulate all the American voices who are saying that Taiwan was always a part of China.”

The AI could potentially push content in swing states to depress voters for one party and encourage the other supporters to head to the polls.

Jashinsky says that there are reasons that the CCP may decide to not weaponize TikTok, but the fact that they can is a problem.

The worst part of this is that the National Association of Secretaries of State, Ballotpedia, the Campus Vote Project, and the Federal Voting Assistance Program, among other organizations, have all decided to partner with TikTok to counter “misinformation.”

And for all the caterwauling by Democrats over the last 6 years about “foreign election interference” the Biden administration is turning a blind eye to the potential problems — perhaps because they think Beijing Biden and his Democrat posse will benefit from it.

After all, the Biden administration has embraced TikTok influencers and is using them to spread Regime propaganda…

Let’s not forget that the TikTok algorithm in North America pushes the most inane, vapid, and damaging drivel that undermines society.

The algorithm promotes videos that push sexualization, gender confusion, dangerous “challenges”, and unhinged teachers talking about how they indoctrinate their students into leftism.

We’re supposed to trust these people on policing election “misinformation”?

Give me a break!