This may be one of the dumbest things a politician has ever said… and that’s saying something.

A Canadian politician decided it was a good idea to rail about the climate impact of indoor ice rinks.

Does she not realize that the national sport is hockey?

An NDP MP’s tweet went viral when she mused about whether we should still have indoor ice rinks, before deleting the tweet on Thursday afternoon.

Bonita Zarrillo, the NDP Member of Parliament for Port Moody-Coquitlam, B.C., tweeted Tuesday: “Is indoor skating ice even a necessity anymore? Can every ice sport be done without ice and different equipment?…just pondering the climate impact of human-made indoor ice.”

She may have deleted the tweet, but the Wayback Machine is forever. 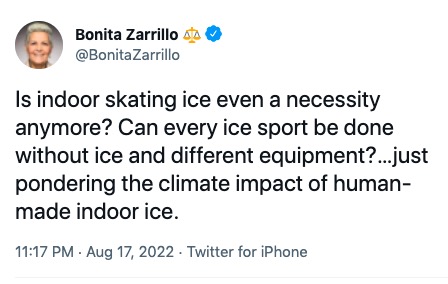 After collecting just a handful of likes and a fair amount of mockery, Zarrillo shared another tweet with a link to an Inhabitat.com article about how sports organizations are exploring alternatives to ice rinks including the use of synthetic ice.

The article states, “Ice rinks are an important fixture of winter sports, whether for ice hockey, speed skating, curling, ice dancing or figure skating. But with growing concerns about global warming, water scarcity and our planet’s climate crisis, even the International Olympic Committee (IOC), the International Ice Hockey Federation (IIHF) and the National Hockey League (NHL) have been considering the environmental issues related to co-ordinating ice sports events and ensuring energy consumption and rink-operating costs are feasible. As a result, there is now a movement towards utilizing synthetic ice on ice rinks.”

Zarrillo briefly doubled down with another tweet, “Not that hockey is the only ice sport but as an FYI NHL is also contemplating their environmental impact,” with a link to the NHL’s “green” initiatives.

So, who is this nut that wants the NHL to switch the ball hockey? She’s a career politician who worships at the altar of Gaia.

For those unfamiliar with Canadian politics, the New Democratic Party (NDP) is the left-wing socialist party that is popular in urban centers and in the West coast province of British Columbia. Politically speaking, just as Alberta is the Texas of Canada, you can think of B.C. as the Canadian version of California.

It won’t surprise you to learn that MP Bonita Zarrillo, who barely won her seat in the last election, opposes pipelines and fearmongers constantly about “climate change.”

The old joke is that NDP stands for “Not a Damned Prayer” at becoming the governing party in Canada.

That’s because these are the kinds of lackluster candidates that the NDP puts out there.

By the way, as Zarrillo herself pointed out, ice rinks are already trying to move away from carbon-based fuels partly because of the increased costs of operation.

Most ice rinks around here are already powered with 98% fossil fuel electricity, soon to be 100% emission free and have been largely decarbonized with the ordering of electric zambonis. From 2018: https://t.co/RQGlNco3TP

This shows that many of these climate cultists are determined to fundamentally alter how we live our lives — they want to change the way we eat, how we travel, and even dictate how many kids we should have. They also want to take away every ounce of fun that’s left.

They’ll harass and hector you until you eat the bugs, live in a pod, and obey every government diktat.

But why just focus on hockey? Other sports affect the environment, too.

We should get rid of indoor basketball arenas to help save the rain forests, too.. 👀 https://t.co/XaFFS60Zfg

This nutty chick can try, but hockey on real ice is here to stay.

Opposition to this tweet is what will finally unite Canada. https://t.co/C7VLYTi21o