What, is Colin Kapernick secretly running the FBI now?

With example after example of the FBI being little more than the enforcement arm of the DNC — with even the ACLU screaming bloody murder at federal law enforcement’s tactics on journalists critical of the current regime — we already know the government hates the political right.

The question is, just how far are the feds willing to take this? Was the tagging of concerned parents at school board meetings as ‘terrorists’ a one-off, or part of a larger campaign of curbing political dissent?

A Project Veritas whistleblower helps answer that question by showing the world what the FBI is looking for in its crackdown on ‘domestic extremism’. You won’t find the iconography of any group that has spent the last few years destroying businesses and public buildings, smashing windows, and chanting F*** the police while launching projectiles at cops and setting fire to their cruisers.

But what you WILL find includes explicitly American imagery associated with groups on the right who think we have wandered outside the boundaries of the Constitution.

How far off-course have we gone? Some of these symbols were embraced by the eminently-peaceful TEA Party movement from a few years ago… the same TEA Party movement that was deliberately singled out for political harassment by Obama’s IRS, just in time to tie their hands in the 2012 election cycle.

This ‘For Internal Use Only’ document produced by the FBI tells us more about the FBI than it does the people they are trying to apprehend.

Remember, much of the left’s Woke policy hinges on the public narrative that White Domestic Extremists are a far greater threat than any other. 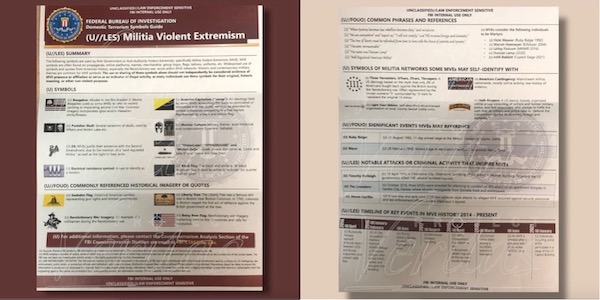 Second Amendment references are a BIG focus of the FBI here because they closely associate interest in upholding rights found in our Founding Documents with ‘Militant Violent Extremism’ (MVE).

The FBI also considers any symbol referencing the Second Amendment as a sign of possible MVE.
Many gun community members have stickers or decals referencing the Second Amendment. Some think this is equivalent to a writer with a First Amendment sticker being considered an extremist because they COULD write something inflammatory. To many, this designation is problematic.
The resistor symbol is one of the most used symbols in electrical engineering and is found on nearly all electrical diagrams. According to the FBI document, the electrical resistor symbol could also signify an extremist. The Bureau claims that extremists use this electrical diagram as a sign of resistance. The FBI also claims that a black American flag or a black and white American flag could signify an MVE. The law enforcement agency says the flag means “no quarter given,” a well-known pirate term.
The FBI also claims that the historic Alamo flag is also a sign of violent extremism. The flag features a canon with the words “Come and Take It” printed below. The phrase comes from the last stand of the 300 Spartans against the Persian armies.

From the official Project Veritas release:

Right below that, under the “Commonly Referenced Historical Imagery and Quotes” section, Revolutionary War images such as the Gadsden Flag and the Betsy Ross Flag are listed. Each flag displayed in the document comes with a brief description of what it means.
Under the “Common Phrases and References” section of the leaked document, Ashli Babbitt is cited as a person that MVEs consider to be a Martyr.
The same document also refers to Ruby Ridge, Waco, and even Timothy McVeigh, tying in traditional American ideas and symbols with radical and/or violent events in the past. — ProjectVeritas

We at ClashDaily have rather a higher standard for our use of the word Martyr than the FBI does (see: In the Twenty-First Century? A Modern Martyr, My Friend: Pastor Samuel), but we do think that every instance of law enforcement using lethal force against an unarmed citizen should be investigated absent any prejudice, political or otherwise.

It is in no way evident that inquiries into her specific case have been held to that high standard.

Can the FBI find its way back to tracking down people who have broken the law, rather than acting as the enforcement arm of the DNC? Or is the institution so far gon that Congress needs to clean house and start over from scratch?