This level of ignorance of politics, economics, and Christianity must take an awful lot of effort.

Stan Van Gundy, former Head Coach of the Orlando Magic, the Miami Heat, and the Detroit Pistons, was blasted on Twitter for a meme he shared with a real smooth-brain take on the Biden admin’s federal student loan debt forgiveness.

Apparently, it was meant to mock the Christian conservatives who are opposed to the government using taxpayer money to pay off the debt of college students and grads who took out loans that they couldn’t repay.

Van Gundy posted a meme about Jesus feeding the five thousand that read, “Jesus’s miracle of the loaves and the fishes was a slap in the face to all the people who brought their own lunch” and captioned it, “Republican logic.” 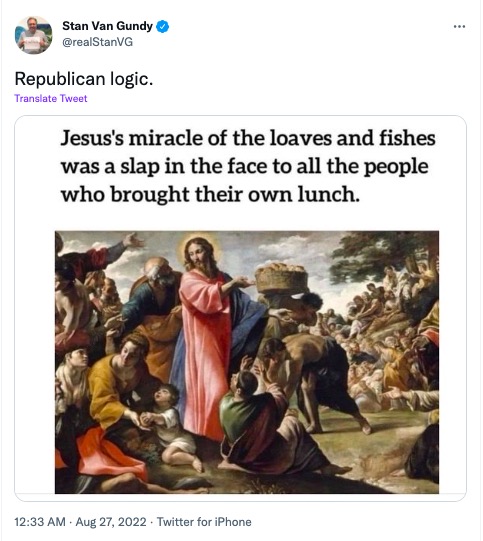 I guess he didn’t read that verse where Jesus told the Pharisees to render to Caesar what is Caesar’s and to God what is God’s.

Van Gundy was blasted by right-wingers in replies and quote tweets for his very special kind of stupid.

I imagine this guy and some of his idiot friends think this is stunningly clever. https://t.co/WMKAlsW53W

I don’t think some basketball coaches have a fully formed understanding of political science or the Bible. https://t.co/1cy4ge0cJZ

It may shock you to discover that this is both ignorant of the issue AND of Christianity. https://t.co/vpYpWhKOZx

Because working class Americans paying for the graduate degrees of the middle class is EXACTLY the same as the Son of God performing a miracle. #DemocratsRCultists https://t.co/vbeYSyCgm3

"Jesus's miracle," where according to big brain @realStanVG, "Jesus" is big government, and "miracle" is taxing the commoners to pay the tax collectors (whose tables he overturned) to give the Pharisees a break on debts they owed. https://t.co/9pO1EEdR9Q

Where did the loaves and fishes come from, Stan?

Jesus was big government taxing the commoners to pay for a meal he gave others for free? Your Bible is weird, Stan.

But Van Gundy wasn’t the only one comparing Biden to Jesus.

In a tweet that is just incomprehensibly stupid, social justice lefty activist who calls himself a Christian, Shane Claiborne, compared paying off student loans to… *checks notes*… salvation itself.

If you’re mad about Biden forgiving student debt… just wait until you hear what Jesus did.

These people are just exhausting!

No, the socialist vote-buying scheme by the Shambling Husk of Mediocrity that is occasionally brought onto a sound stage replica of the Oval Office is not comparable to a miracle performed by Jesus.

Nor should it be compared in any way, shape, or form to the substitutionary atonement of Christ for the remission of sin. That’s just insane.

But this is what you get when people have a skewed version of the Bible and Jesus.

All these stupid comments do is expose their ignorance of Christianity.

Don’t be that guy.