Democrats went from wanting to abolish the police a year ago to staunch defenders of law and order.

Donald Trump has been raided by the FBI and is in the crosshairs of Biden’s weaponized Department of Justice led by a man who didn’t make it to the Supreme Court.

On August 9, House Speaker Nancy Pelosi (D-CA) was on the Today Show. Her response to Savannah Guthrie about the FBI seizing documents from former President Trump’s Mar-A-Lago home was interesting.

House Speaker Nancy Pelosi is talking live with @SavannahGuthrie for her first interview since returning to Washington.

To quote Cocaine Mitch McConnell from 2013 after Harry Reid used the nuclear option to push through Obama judicial nominees, “you’ll regret this, and you may regret it a lot sooner than you think.”

We know that Democrats don’t really think much about law and order… until it can be used to punish their enemies. 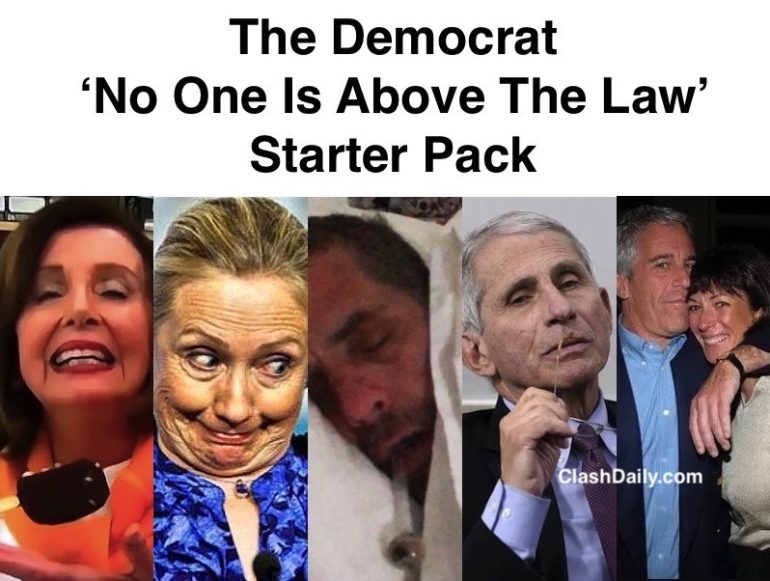 Nancy Pelosi’s husband Paul has an uncanny knack for investment that has made his family very, very wealthy. Interestingly, he’s investing in companies just before they land a lucrative contract with the government. Weird, right? But it’s not like his wife, the Speaker of the House, who knows all about these contracts, has anything at all to do with that, right? That would be very wrong — even criminal. It’s been going on for years, you’d think that someone concerned about transparency would look into it at some point.

Where do we begin with Hillary?

There’s the “wrap-up smear” that her campaign used on Trump that dogged him for the entire 4 years as President.

Then there’s the unsecured email server and the 30,000 emails that she deleted after they had been subpoenaed, and her team smashing the devices she used with hammers.

Hillary and Bill have a history of this kind of thing. From the Uranium One Deal to exorbitant speaking fees to Haiti earthquake funds disappearing around the time of Chelsea’s lavish wedding, to quashing Bill’s accusers to the Whitewater affair to stealing furnishings from the White House as they left, it’s been one sketchy thing after another with the Clintons.

And then there are all of his foreign business connections. It seems more news items are coming out daily connecting Joe to Hunter’s business deals.

And now, Hunter is selling crappy art to anonymous buyers while his father is President and we’re not supposed to question that.

Gain-of-Function research funded by the NIH with the nod from Dr. Fauci may have unleashed this hell that we’ve been in for the past two and a half years, even though that sort of research had been banned as too dangerous.

Fauci still denies that the SARS-CoV-2 virus could have come from the lab in Wuhan and he and his boss, NIH Director Francis Collins, began a smear campaign against scientists that suggested that a lab leak was a possible source of the outbreak.

Fauci has lied in Congressional hearings.

Jeffrey Epstein, who died under suspicious circumstances while in custody, and Ghislaine Maxwell, who is now in a low-security facility in Florida, were arrested for their heinous acts, what happened to the clients that abused the young girls that the sick, twisted pair trafficked? Not a single person has been charged with the sexual abuse or rape of minors that were trafficked by Epstein and Maxwell.

ABC News, where former Clinton hatchet man, George Stephanopoulos, is now working as a Serious Journalist™ buried the story for years… but don’t ask questions about that.

Yeah… I’m not buying the “no one is above the law” bunk from Nutty Nancy. It seems that Democrats only support law and order when they can use law enforcement as their version of the Gestapo.