On Wednesday night, a confrontation between a Plano woman named Esme and some Indian-American women was filmed. In that video, she used some racially-charged language and harsh words escalated into physical violence.

The police got involved, and charges have been filed.

ASSAULT ARREST
On Thursday, August 25, 2022, at approximately 3:50 p.m., Plano Police Detectives arrested Esmeralda Upton of Plano on one charge of Assault Bodily Injury and one for Terroristic Threats and is being held on a total bond amount of $10,000. A jail photo is attached. pic.twitter.com/cEj9RwWdt1

This is the incident that was filmed. It began as insults hurled over the shoulder, and before you knew it, the woman started throwing hands.

Plano TX USA: Four Indian women were verbally abused, physically attacked, and threatened at gunpoint by this racist woman who has been identified as Esmi Armendarez Upton.
She herself is second generation immigrant from Mexico.#racism pic.twitter.com/XzX8wsDPjb

Naturally, since they have been investing years in building a narrative that Republicans are the party of bigotry, the left wasted no time painting this woman as one of those evil Republicans they like to talk about.

To how the left has been running with it: 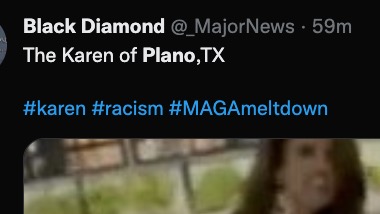 They are torn between assuming she is either an eeeevil MAGA voter or else they grab at straws looking for ways to frame her as a white supremacist.

(That’s what the coconut reference is all about. She’s being called brown on the outside, but white on the inside. Just like Larry Elder was somehow the ‘black face of white supremacy’.)

Here’s the problem with that. According to official state records, the woman in question is a frequent voter, but there is no reason for Dems to base any assumptions on what party she might support. Texas does not even make such information public.

They desperately want to call her a racist… but this is the same party that has been saying for years that only white people can be racist. People of Color cannot be racist, the logic goes, because they do not hold any institutional power.

But she’s still a Mexican. And she’s one who votes.

If she’s an ‘evil Republican’, that might remind people of the very uncomfortable fact that a whole hell of a lot of Hispanic voters have been called Latinx by privileged costal elites one time too many, and have turned their backs on the Democrat party.

That trend has flipped districts like the one Mayra Flores won in a special election representing the first electoral Democrats had there in something like 120 years.

This lady has a really messed-up idea of what badass looks like.

If only she’d had a chance to read this book, maybe she wouldn’t have found herself becoming ‘internet-famous’.