Despite four jabs of the vaccine that he touted as “90% effective”, Pfizer CEO Albert Bourla has tested positive for COVID-19.

We now know that the 90% was more wishcasting than accurate data, they lost efficacy rather quickly, and as the virus has changed over the past couple of years, the jabs based on the old strains are far less effective than they were when they were first trotted out.

Pfizer CEO Albert Bourla posted on Twitter on Monday that he has tested positive for SARS-CoV-2 despite having four doses of the Pfizer magic juice.

I would like to let you know that I have tested positive for #COVID19. I am thankful to have received four doses of the Pfizer-BioNTech vaccine, and I am feeling well while experiencing very mild symptoms. I am isolating and have started a course of Paxlovid.

Look at that — Bourla said The Line. 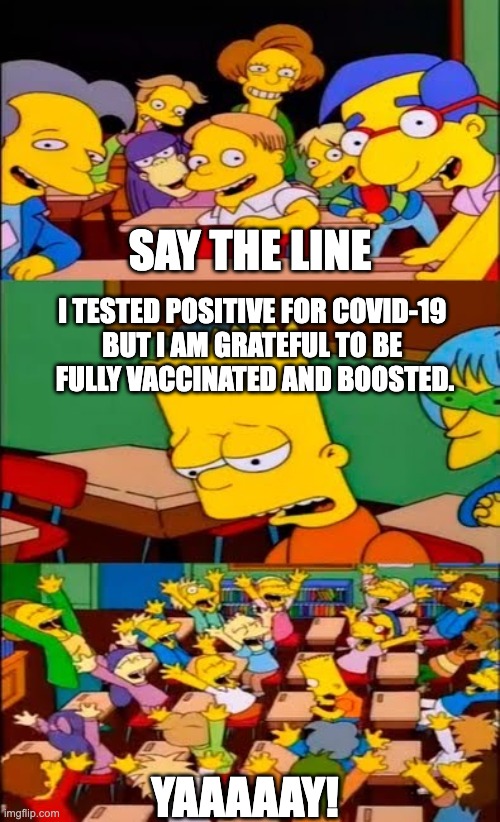 Maybe Bourla’s COVID diagnosis will prompt a push for an Omicron-specific jab ten months after the variant was first detected. We were told that the reason that the new mRNA technology was used was that it was easier to adjust the vaccine when variants arose. That hasn’t been done yet — the vaccines (and boosters) that are in use are still for the original strain of COVID-19.

But hey, what’s the rush? Pfizer has developed an antiviral and secured a rather lucrative deal with the U.S. government worth billions, even though it seems to be extending the COVID infection in some patients.

Now that he’s taking Paxlovid, ClashDaily will keep an eye on Bourla’s status to see if he’s among the allegedy “rare” cases of Rebound ‘Rona like Fauci and Biden.

The acknowledged COVID diagnosis doesn’t quite fit with what Albert Bourla had said about the efficacy of the COVID shots. 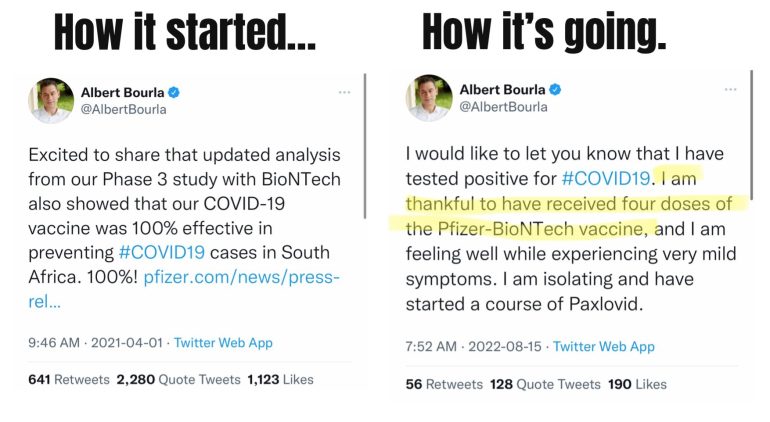 Let’s just take a little stroll back in time and examine some of Bourla’s public statements about the jabs.

The pro-jab crowd is now saying that the vaccines were never marketed at preventing COVID-19. That’s simply untrue. One of the people who insisted that the shots would prevent infection is none other than the CEO of Pfizer himself.

Today is a great day for both science and humanity, as the first set of results from our Phase 3 COVID-19 vaccine trial provides compelling evidence of our vaccine’s ability to help prevent COVID-19. https://t.co/UjcoSD75tT

He then went on CNBC crowing about the vaccine and billed it as “90% effective in preventing COVID-19.”

After Pfizer announced its coronavirus vaccine was more than 90% effective in preventing Covid-19 for those who had no evidence of previously being infected, CEO Albert Bourla said he believes the world “can see light at the end of the tunnel.” https://t.co/3acYVdSGkV pic.twitter.com/7kCDOAlZIO

Never forget that these vaccine-peddlers insisted that the vaxx was going to end the pandemic.

The data that suggest the vaccine may provide protection against asymptomatic infections are particularly meaningful, because asymptomatic carriers are often the biggest spreaders of disease. (3/5)

Asymptomatic carriers have the virus, but may not know it, and therefore are less likely to isolate themselves and can unwittingly infect others around them. (4/5)

Pfizer CEO Albert Bourla suggested this week that the $PFE vaccine can prevent transmission of COVID-19.@ScottGottliebMD – who serves on the company’s board – weighs in: “Evidence coming out suggests that the impact on a reduction in transmission could be quite strong.” pic.twitter.com/uf8Sl0vTJc

Then, on April 1, 2021, Bourla tweeted that the data from the Phase 3 trial shows that the jab was 100% effective in preventing cases. He was so excited about that “100% effective” that he repeated it.

Excited to share that updated analysis from our Phase 3 study with BioNTech also showed that our COVID-19 vaccine was 100% effective in preventing #COVID19 cases in South Africa. 100%! https://t.co/E2ksTJSopU

Is this a bad time to remind everyone that the now-dominant Omicron variant began in South Africa?

The burning question is — Did Bourla mean for that to be an April Fool’s Day joke or is it just hilarious irony?

In November 2021, as “breakthrough” COVID cases began to rise, Bourla was railing against the “anti-vaxxers” — which had recently been redefined to include those who had received the shots but were now critical of the claims that it did what it was advertised to do.

“Those people are criminals … they literally costed millions of lives.” pic.twitter.com/4i4QJ847Le

By December, Bourla admitted that annual vaccination may be necessary.

He then advocated for a second booster bringing the total jabs up to four.

Of course, pushing a subscription service for every human on the planet wouldn’t mean an annual windfall for the biggest player in the COVID jab game, right?

Here is Bourla with real-life Bond Villain Klaus Schwab at the World Economic Forum in May of this year making fun of the conspiracy theories spread about them by the “fanatic group of anti-vaxxers.”

WEF Chairman Klaus Schwab and Pfizer CEO Albert Bourla laugh about the “fanatic group of anti-vaxxers” that went after Pfizer in the past year and the conspiracy theories that they have read about themselves. pic.twitter.com/nkq3Yp5hSb

Some of the stuff said about Bourla was B.S. using manipulated media, but some of the criticism is pretty fair — like quoting him on the way he touted the efficacy of the Pfizer-BioNTech shots.

In June, he was tweeting about the possibility of creating a booster to deal with the Omicron subvariants and said that the mRNA technology allows them to “quickly update vaccine constructs” to address new strains that become more prominent… which hasn’t been done to date despite Omicron spreading since November 2021.

Bourla also reminds everyone that the shots are now available for babies.

We are following guidance from @US_FDA to develop a bivalent Omicron BA.4/BA.5 subvariant vaccine booster to help protect people, subject to regulatory authorization, as we enter the next chapter of the #COVID19 pandemic.

Emergency uses of the vaccine have not been approved or licensed by US FDA but have been authorized to prevent COVID-19 in ages 6mos+. See Fact Sheets: https://t.co/MdHBvsOBj2

Max Blumenthal of GreyZone News notes that back in 2018, Bourla had wanted regulations loosened on pharmaceutical trials.

Bourla can rant and rave about the “anti-vaxxers” and how they’re costing lives — but he wasn’t exactly up front about these shots from the start, and as we’re seeing with the document dumps, the jabs aren’t as “safe and effective” as they were marketed to be.

The problem for Albert Bourla and Pfizer is that some of these critics have a great deal of clout.