China is rattling its saber on the question of Taiwan. Is Xi trying to make Biden lose face, or are they on their way to moving on Taiwan the way they moved on Hong Kong?

It’s easy for those of us in West to forget that China is not built on the same philosophical foundations and assumptions of international cooperation that we are.

They are a proud nation well-accustomed to being an empire. They view the loss of the neighbor states they once controlled as part of a ‘national humiliation’. Speeches like the one Xi gave on the 100th anniversary of the establishment of the Chinese Communist Party made it clear that they have neither forgotten nor forgiven.

Taiwan is important to China because it never fell to the CCP during Mao’s revolution. Taiwan is the safe haven to which China’s previous government fled to safety. Not surprisingly, the Communist Chinese and independent Taiwanese have very different ideas about the future of that prospering island.

China used the distraction of the 2020 Pandemic to wipe away any illusions Hong Kong might have had that they were still self-governing and working within the agreement China had established with the UK as the lease for Hong Kong came to an end.

Locals tried to protest, but people like the NBA made it clear they were more interested in trade than the fate of Hong Kong’s protesters… many of whom have since become political prisoners.

Xi, who has set himself up as dictator for life, has made his expansionist plans very clear.

He invoked bellicose language about the ‘reunification’ (we would call it conquest) of Taiwain in that 100th anniversary of Chinese Communism speech.

ClashDaily has been keeping an eye on these developments. Here are a few examples:

They even threatened Japan that they would send waves of nukes into Japan if it sent a single troop or boat in defense of Taiwan. China Just Threatened To Nuke Japan … Should This Cost Them The Olympics?

In December of 2020, Reuters was already reporting on China’s tactic of ‘grey zone warfare’ to ‘subdue Taiwan’.

Months after eliminating a popular challenge to its rule in Hong Kong, China is turning to an even higher-stakes target: self-governing Taiwan. The island has been bracing for conflict with China for decades, and in some respects, that battle has now begun.
It’s not the final, titanic clash that Taiwan has long feared, with Chinese troops storming the beaches. Instead, the People’s Liberation Army, China’s two-million-strong military, has launched a form of “gray zone” warfare. In this irregular type of conflict, which stops short of an actual shooting war, the aim is to subdue the foe through exhaustion.
Beijing is conducting waves of threatening forays from the air while ratcheting up existing pressure tactics to erode Taiwan’s will to resist, say current and former senior Taiwanese and U.S. military officers. The flights, they say, complement amphibious landing exercises, naval patrols, cyber attacks and diplomatic isolation. —Reuters

What was it Joe Biden said? ‘They’re not bad folks, folks?’

We suspect that might be Joe’s bank account talking rather than any honest assessment of their threat to global stability.

The Pelosi Visit To Taiwan

Leaving aside any potential ulterior motives for Pelosi’s visit — ranging from legacy building as a heroic figure just before retiring, to financial gain by touring companies her husband is invested in, to distracting from her husband’s DUI trial that just happens to be unfolding as this article is being written — the fact remains that American officials have a long history of visiting Taiwan and have never asked Beijing’s permission to do so.

Leaking her visit ahead of time gave China time to turn the visit into political theatre, to set up a narrative critical of Americans, and to exploit Joe Biden’s weakness and indecision — but she was within her right to visit.

Now that Pelosi made good on her plan to visit, China has responded by ramping up their military readiness even further.

As part of the pageantry, China rolled out lines of tanks on the Chinese Mainland opposite Taiwan, as though they needed to face down some sort of an ‘invasion’.

Then they encircled Taiwan with ‘live fire exercises’ while shutting down civilian flights into and out of the island.

(We used to call such tactics a ‘blockade’, which is traditionally seen as a hostile provocation.) 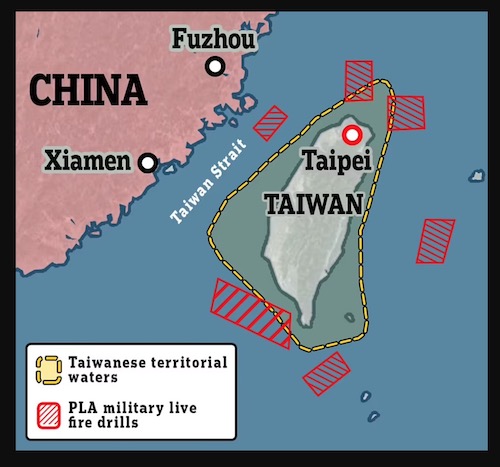 Dozens of Chinese warplanes entered Taiwan’s air defence zone today, shortly after Nancy Pelosi flew out of the country following a diplomatic visit that infuriated Beijing and drew threats of military retaliation.
In total, 27 fighters including 16 Russian-made Su-30 jets crossed into the zone, which prompted defensive measures from Taipei. The incursion comes amidst huge Chinese war games taking place until Sunday, which will surround the island in an effective blockade and cross into Taiwan’s territorial waters.
But Taipei’s generals have defied the threats, saying today that they are not looking for a fight with China but ‘won’t shy away from one’ either. ‘We are resolved to uphold our sovereignty, liberty and democracy’ they said in a statement posted alongside a video of fighter jets, submarines, attack helicopters and warships on manoeuvres. —DailyMail

This adminstration has already bungled its way into one bloody war when Biden telegraphed weakness to Putin that America would take no action if there was a ‘minor incursion’ to Ukraine. We all see how that played out.

Now that Democrats have stuck us with a president who talks loudly (during a campaign, anyway) and carries a limp twig in meaningful foreign policy.

Biden has shown himself to be so weak that he’s unwilling even to say a peep when the same Chinese Communist Party that his immediate family profited so handsomely from threatens to commit an act of war against a plane carrying the Speaker of the House.

What happened to the tough guy with his pushups and fistfights behind the gym now that decisive action on his part actually matters a damn?