A bystander filmed the incident quickly sparking outrage at the violence.

At around 10:40 am on Sunday, two Crawford County deputies and a Mulberry police officer were caught on video brutally beating a man who is already restrained outside of a convenience store in Mulberry, Arkansas, which is around 135 miles north of Little Rock.

Three Arkansas cops were suspended after video of them emerged brutally beating an arrest suspect at a gas station – sparking angry reaction across the country as the footage circulated online.

Cops said Randall Worcester, 27, was making threats to a convenience store worker in Mulberry, near Little Rock, on Sunday morning.

When several officers went to confront him, he allegedly pushed a deputy to the ground and punched the back of his head, leading to the arrest seen in the clip.

A bystander in her car captured the video and her sister, Naomi Johnson, posted it online asking who she needed to contact to report police brutality.

Naomi Johnson’s sister said she arrived at a gas station when she saw a shoeless man sitting on the curb and talking to police officers. She then saw the man get up and try and run away, but was tackled.

Johnson’s sister reported that she thought the man seemed in mental distress, the Arkansas Times reported.

Johnson’s sister was in her car with a friend at the time, the newspaper reported. The pair can be heard in the footage shouting at the officer to stop punching the man.

The audio is difficult to pick up from the footage, but it sounds like one officer tells the people in the car to ‘back the f**k up’.

The video was shared on multiple social media platforms.

It shows Worcester on the ground restrained by one officer while a second holds down his legs repeatedly kneeing him in the legs and back and a third officer punches him in the head while pulling the suspect’s hood over his face. At one point, the officer punching Worcester in the face lifts his head and slams it into the concrete.

By Sunday evening, both the County Sherriff’s office and the Mulberry Police Department had taken action against the officers.

‘I hold all my employees accountable for their actions and will take appropriate measures in this matter,’ Damante said.

In a statement released Sunday evening, Mulberry Police Chief Shannon Gregory said the officer involved in the incident is on leave pending the outcome of the investigation.

‘The city of Mulberry and the Mulberry police department takes these investigations very seriously,’ Gregory said.

Arkansas Governor Asa Hutchinson tweeted that he spoke to the head of the Arkansas State Police and said that the incident will be investigated.

Mulberry Mayor Gary Baxter said he was “shocked and sickened” by the video and demanded that the officer involved be put on immediate leave and that a full investigation was conducted. 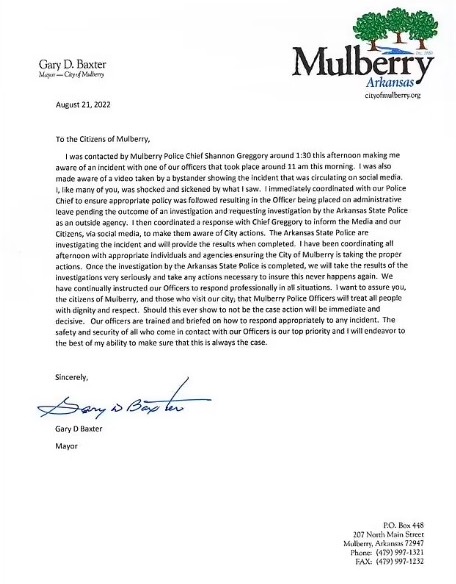 It’s all good and well to back the blue, but it’s important not to do so blindly.

In order to be able to have trust in law enforcement, we need to call out actual bad behavior when it happens.

Some things are pretty clearly police brutality. This incident is one of those times. Did the guy hit a cop? Apparently. Is that ok? Nope. But the guy was pinned and no longer posed a threat there’s no reason for three cops to beat the crap out of him when he’s already down.