The same outlets who kept the Pulitzer Prizes received for reporting on the discredited Russian Hoax want us to believe the Trump raid involved ‘nuclear secrets’. But what do the FACTS tell us?

With the court unsealing the warrant, we’re now one step closer to having answers. But there’s still a long way to go.

A judge ordered the warrant and the receipt detailing the items taken to be unsealed. We’ve included an image. The warrant tells us a few interesting things.

1) The warrant (executed on Monday, Aug 8th) was signed on Friday, August 5th at 12:12, and remained valid through August 19th.

The lag time between the issue of the warrant and its execution could be tough to square with any arguments raid supporters would seem to undercut the very logic that would require the DOJ to execute a warrant instead of a simple subpoena. 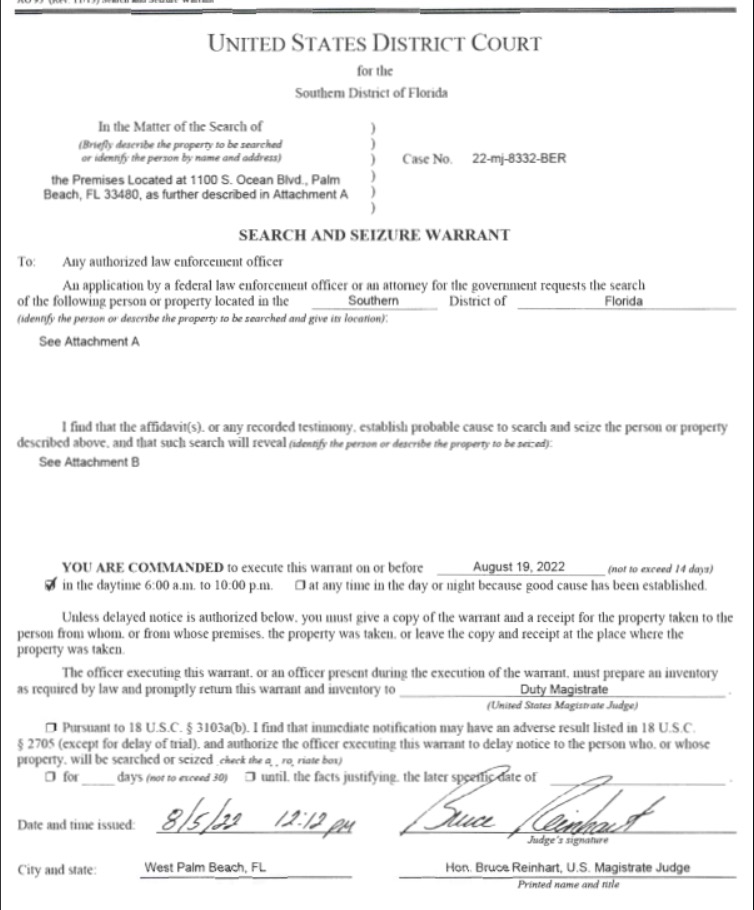 2) The warrant was signed by Bruce Reinheart, magistrate judge.

Concerns have already been raised about Reinheart’s social media history and past political donations, as to whether he should have recused himself from this case. Questions about his overall integrity judgment have also been raised in connection to his past involvement with several Epstein-related cases.

Most relevant to this case is the fact that a Magistrate judge does not have anywhere near the same standing as an Article III judge. Owing to the precedents and impact the execution of a warrant against a former President’s home could have, it is argued he should have deferred to, or at least consulted with an Article III judge just to be sure he got this ruling right.

This section of the Warrant gets to the heart of the matter. It said that Attachment B would identify the crimes alleged against Trump which would presumably justify the urgent need to use a raid rather than a subpoena to retrieve the documents in question.

What ‘probable cause’ led the Magistrate to give this raid the green light? Oh, we’re not supposed to call it a raid? What a sudden and convenient change in policy.

The affidavits are not (yet) available. But we can get some indirect clues from the charges mentioned on the warrant.

What are the charges alleged against Trump?

(images are clicakable and link back to this site:

This is the law as it exists as of August 11, 2022, AFTER the warrant was executed. It is unclear whether this represents an edit to this violation that comes into effect as of August 11th of 2022 or is basically an updated signpost stating for anyone looking it up that this law exists in this format on this day.

Fun fact — what you see in this list just happens to be the very same violations James Comey told us Hillary could NOT be charged for.

This seems a good point to bring this up:

Again, the classification statutes/regulations *do not apply* to the President of the United States.

He has the inherent constitutional power, as commander-in-chief, to classify and declassify anything he wants, in any manner he wants.

The Supreme Court reaffirmed this in 1987. https://t.co/bANCEhBTT1

Voices on the Left have already begun their usual hair-on-fire claims that Trump is the devil himself, whipping up stories that Trump is selling nuclear secrets to Putin, or whatever as if Putin doesn’t have his own problems to deal with.

The receipt for what they took looks like this: 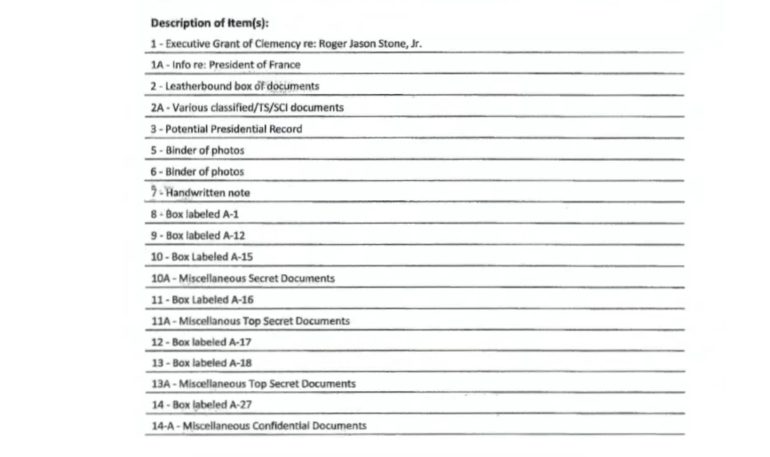 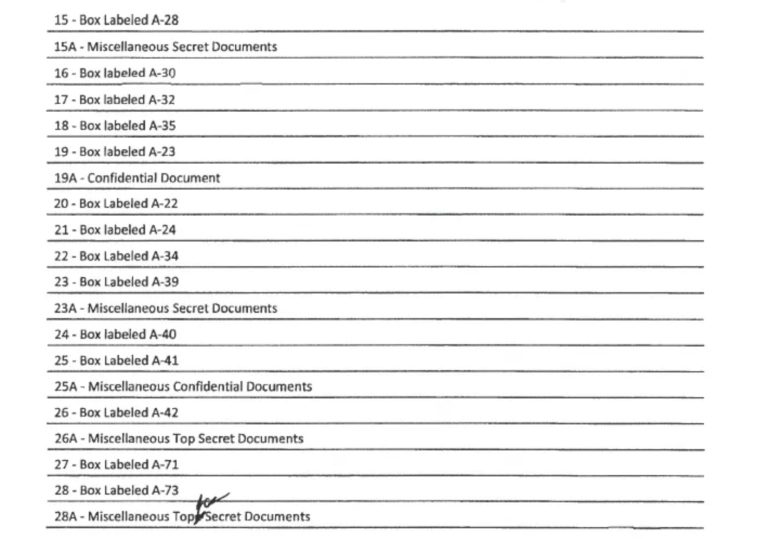 But there are unaswered questions here, a lot of them.

Here are a few being raised by voices skeptical of this entire course of action, in no particular order:

– Mar-A-Lago had a SCIF — specifically built for safely containing sensitive files. Trump even replaced a lock in order to comply with correct handling of documents requirements.
– A guest on Bongino’s podcast asked: Was the lock replacement a ruse (think Comey’s ambush of Flynn) to give an informant access to the room so he could take a peek around and gin up probable cause for a criminal investigation?
– ‘But Her Emails’: Hillary dealt with subpoenas and digital information subject to hackers being used on insecure networks, and she willfully destroyed information that was under subpoena… and was never charged. Comey said she ‘lacked intent’.
– Ditto: Obama’s emails, Comey’s Work Product, Sandy Berger, and Obama’s f
– Does anyone really believe Trump packs his own boxes? And if they were packed by White House staffers, how does that possibly equate to intent on Trump’s part
– Maggie Haberman was a reliable media plant for Hillary loyalists to drop FED leaks during the Crossfire Hurricane conspiracy. Are we REALLY supposed to believe it was coincidence that Maggie Haberman’s story about Trump throwing ripped up pieces of paper down the toilet just HAPPENED to run in the 3-day-window AFTER the warrant was granted, but BEFORE it was executed?
– Feds stopped cooperating amicably with Trump in June? What changed?
– Trump loyalists claim the documents in question were already declassified while Trump was President… what happens if they were?
– Was this nothing more an elaborate entrapment scheme giving them plausible ’cause’ to snoop through Mar-A-Lago for incriminating J6 evidence?
– Since Trump gave Merick Garland’s SCOTUS job to a rival, why did Garland not need to recuse himself?
– Was the DOJ afraid Trump had dangerously damning Crossfire Hurricane documents? Were they afraid he would go public?
– Was this related to Trump’s $72M lawsuit filed against Hillary Clinton and other alleged Crossfire Hurricane co-consirators?
– Was this just an attempt to take a political rival off the map?
– Was Biden’s vacation deliberately timed to coincide with this raid?
– How do we reconcile this raid with FBI whistleblower complaints that the FBI has actively been shielding Huter Biden from scrutiny?

You might come up with more questions. But this is a good start.

A little perspective (and levity) from Scott Adams, creator of dilbert. 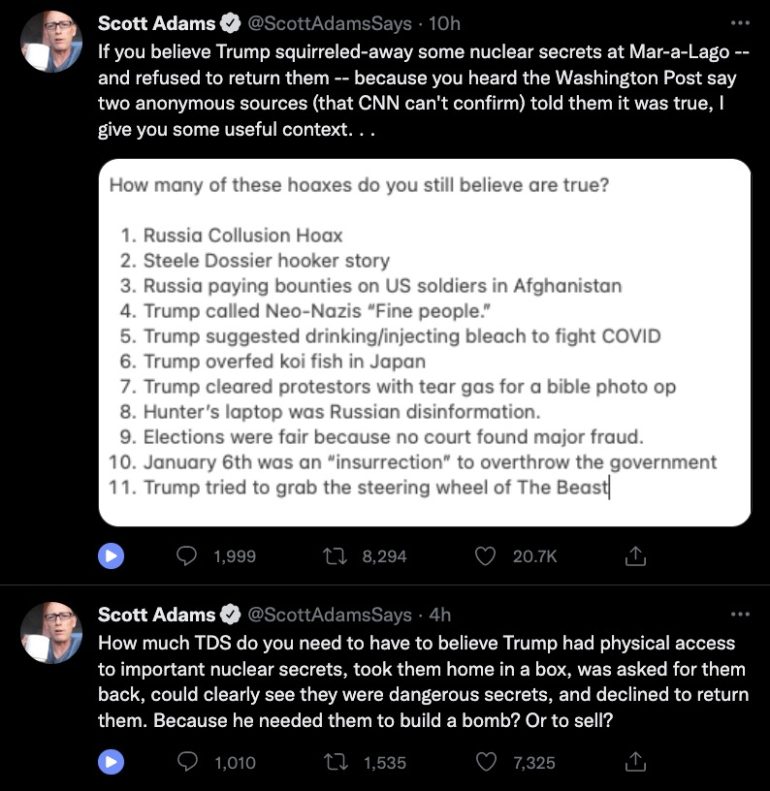 And for anyone who thought this would destroy the MAGA movement?

You have awakened MEGA MAGA.

The left had trouble dealing with the King of Trolls.

What are you going to do now that you’ve slipped up and turned him a political martyr?