Zuckerberg admits that Facebook algorithmically censored the Hunter Biden laptop story for 5 to 7 days on a general warning about “Russian propaganda” from the FBI.

On Thursday’s episode of The Joe Rogan Experience, Meta CEO Mark Zuckerberg discussed how Facebook’s handling of the Hunter Biden laptop story in October 2020 was different from Twitter.

Zuckerberg said that Twitter completely disallowed sharing of the New York Post story, but Facebook didn’t do that, they simply ranked it lower in the newsfeed so that it didn’t reach as many users.

Twitter famously locked out the New York Post from their account and didn’t allow links to the story to be shared by any users — even in private messages.

Zuck said that in contrast, Facebook “decreased distribution” of the laptop story so “fewer people saw it than would’ve otherwise” as third-party fact-checkers attempted to verify it.

The really fascinating part was the “why” — Zuckerberg said the platform censored the story because of a general warning by the FBI. He said that the federal law enforcement agency had contacted Facebook ahead of the 2020 election warning them that a “Russian propaganda dump” was coming and that they should be vigilant about election “misinformation.”

“The FBI basically came to us and some folks on our team and said, ‘Hey, just so you know, you should be on high alert, we thought there was a lot of Russian propaganda in the 2016 election and we have noticed that basically there’s about to be some kind of dump that’s similar to that, so be vigilant,’” said Zuckerberg.

Rogan asked “by what percentage” the story was suppressed.

“I don’t know off the top of my head, but it’s — it’s meaningful,” replied Zuckerberg. “But we weren’t sort of as black and white about it as Twitter. We just kind of thought hey look, if the FBI, which I still view is a legitimate institution in this country, it’s a very professional law enforcement- they come to us and tell us that we need to be on guard about something then I want to take that seriously.”

“Did they specifically say you need to be on guard about that story?” asked Rogan.

“No, I don’t remember if it was that specifically, but it basically fit the pattern,” Zuckerberg said.

Zuckerberg now says that now the laptop has been verified as Hunter Biden’s, he regrets the censorship of the story but maintains that the “process was pretty reasonable” based on what Facebook knew at the time.

To repeat, the federal law enforcement agency contacted one of the most used social media platforms to warn of potential “misinformation” ahead of the election, so that “private company” algorithmically censored the story.

Does anyone see a problem with that?

Zuck also says that third-party fact-checkers were looking into the story to see if it was legitimate. But, as we all know, according to Facebook’s lawsuit with John Stossel, the “independent fact-checkers” that they use are “protected opinion.”

Here’s a screenshot from the lawsuit Stossel v. Facebook Inc. where Facebook makes it very clear that the third-party fact-checks are simply opinions. 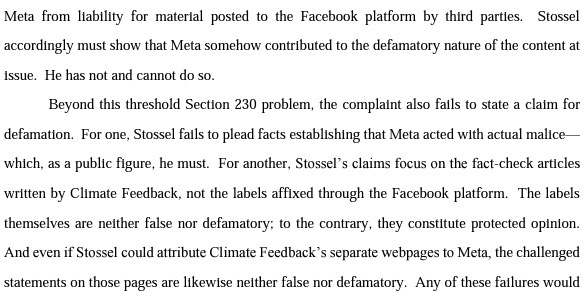 Zuck: if something is reported to us as important misinfo/disinfo, then we also have third-party fact checkers … which Meta has said in court are just expert opinions and are freedom of speech, yet are granted more weight or used to censor, downgrade in algo. Lawsuit. pic.twitter.com/aGmLrs38zn

This is so wrong on so many levels — the weaponized use of the algorithm to downgrade a relevant news story, the reliance on “fact-checkers” that don’t know their ass from Page 6, and especially the politicized FBI approaching a private company to suppress information damaging to one candidate ahead of a presidential election violates any semblance of independence, especially when Facebook and Zuckerberg himself have been part of that “secret cabal that fortified” the 2020 election and are more than willing to put thumbs on the scales for Democrats.

You take this story, Comey’s FBI handling of Hillary’s emails, the blind eye they’re turning on Hunter’s criminal activity and the entire Biden family’s influence-peddling scheme, and the White House directing the FBI raid on Trump’s residence and taking Trump’s passport — this is some pretty damning stuff.

The left is always screaming about “threats to democracy” — well, here you go. Here is a threat to democracy on a silver platter. This miracle has been brought to you by the FBI.

This should be the biggest story on the news today, but it’ll probably be forgotten by tomorrow. It is, after all, a Friday in August and people are out enjoying the last bit of summer and they don’t seem to realize that we’re in the midst of the fall of the Republic.

If you care that the FBI is directing social media companies to censor information, then share this article.