What the hell is Crazy Joe talking about? The entire world gave Big Pharma cash hand-over-fist for the COVID jabs.

Here’s Joe in Wisconsin on Monday leaning into that weird “Dark Brandon” branding by his team — screaming and shaking like a madman, “We beat Pharma this year!”

Biden almost has a stroke screaming about how he "beat Pharma."

Yes, Joe. Big Pharma has been utterly devastated by the never-ending money spigot that continues to give them tens of billions in taxpayer dollars. pic.twitter.com/NhHIyQdFop

He does not look okay in that cllp.

Would that be the same “pharma” that the Biden administration is trusting to provide a lifetime of “gender-affirming” treatment for children?

“We beat pharma this year!” screams maniacal man whose Democratic party insists on giving chemical castration drugs to 10-year-olds when they say they are transgender. pic.twitter.com/5HFGlkBXms

Clueless Joe was talking about a provision in the so-called “Inflation Reduction Act” to cut drug prices for around 10 prescription medications mostly for Medicaid recipients over 65… beginning in the year 2026.

That is the win he’s celebrating with hysterical fervor.

Reducing prescription drugs by 10 percent is listed as one of President Trump’s accomplishments when he was in office. Trump had also assisted the state of Florida to work out a plan to import drugs from Canada to assist Medicaid recipients in the state which would save the state as much as $150 million a year.

A Business Insider article from *checks notes* August 31, 2022 states that Florida is presently suing Biden’s FDA for slow-walking the process.

Florida is suing the Food and Drug Administration because it hasn’t moved to approve a plan from Republican Gov. Ron DeSantis to import less expensive prescription drugs from Canada.

The governor on Wednesday accused the FDA of having “unlawfully withheld” and “unreasonably delayed” approval of Florida’s program, saying, “We think this violates federal law.” The state is suing to have a federal judge order an end to the delay…

That doesn’t seem like the Biden admin is committed to “beat Pharma” if it helps a red state.

By the way, Pfizer’s revenues for FY 2021 and the first quarters of 2022 also don’t look like the Biden administration “beat Pharma this year.” 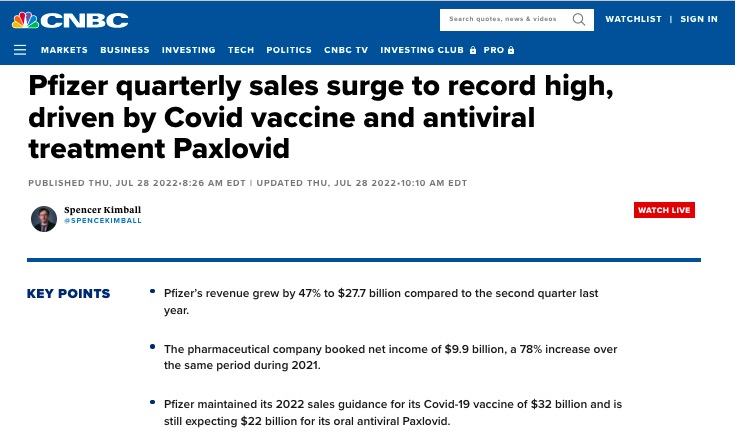 Does Angry Joe know why Big Pharma is able to make some modest discounts? It’s because they’ve got the entire world on a Netflix-style subscription plan for “vaccines” backed by politicians and paid for by governments.

His administration handed billions over to Pfizer alone for the jabs and the new antiviral, Paxlovid.

They’ve pushed these shots on everyone… including children and not bothering to go through the testing process.

FDA will likely authorize the Omicron vaccine later today/tomorrow based on data from 8 mice and no human clinical data avail to the public. Americans deserve to see the data. Why is the White House/Dr. Jha pushing it so hard & universally w/o public data? https://t.co/mfgyJnHOiv

Governments worldwide have signed on to a vaccine subscription plan that continues with each new variant.

And if you don’t get it, the Biden admin wanted you fired.

But Pfizer shouldn’t be counting all the cash just yet… there’s a fight over the rights to the mRNA tech, which was developed with the assistance of scientists who work for public health agencies.

Big Pharma is making billions because COVIDictators like Joe Biden are still pushing the jabs even though most people have already had COVID in the past year.

Absolute psychos like Canadian Prime Minister Justin Trudeau are threatening more lockdowns unless the vast majority of the population lines up for boosters.

Here he is just a few days ago making it clear that lockdowns are coming if 80-90% of the population doesn’t turn themselves into a pincushion for Big Pharma.

Must Watch: Justin Trudeau tells Canadians in a recent press conference in Winnipeg that we must get 80-90% of the population up to date on vaccines in order to see much less restrictions and rules this winter. pic.twitter.com/tTGnShx0g3

The sociopaths at the Canadian immunization authority are actually suggesting that it may be necessary for Canadians to get a booster shot every 90 days.

Not every 9 months. Or every 6 months.

They’re now saying you should get it every 3 months. Four shots per year.

Trudeau needs to get rid of the hundreds of millions of doses he bought.https://t.co/WZTYB4JoUd

Don’t you think that COVIDictators Fauci and Biden would do the same if they could get away with it? You bet your butt they would.

Angry Joe can shout all he wants about how he’s “beat Pharma” but we all know the truth — Joe cheerleading for the jabs has been one of the best things to happen to Big Pharma in a long time.