From the videos he’s posting onto TikTok, it appears that the alleged “founder of Anonymous” is having a pretty tough time.

In February 2022, the list of GiveSendGo donors to the Freedom Convy was published online.

The self-proclaimed “founder” of the hacker group, Anonymous, Aubery Cottle, aka “Kirtaner”, claimed that he was the one to make the list public.

Now, it seems things aren’t going so well for Cottle… he’s begging for money from his social media followers and appears to be living in his car.

During a live stream, he said that the Ontario Provincial Police (OPP) seized all of his devices in a raid because of his hacking.

In a second video, he refuses to say what the OPP had been investigating when they seized his devices, but he does say that there was a “long series of events” that began in February.

You can tell from his filthy shirt, yellow teeth and shiny skin.,that the 35 yr old deadbeat dad hasn't bathed and has been going downhill for months. #AubreykitanerCottle#Anon Says he has a kid in the US and life going downhill since February. Right after the Convoy. pic.twitter.com/bwPE7i37iQ

Or could it all be just a grift?

It wouldn’t be out of character for Cottle.

Back in December 2021, Cottle told CNN that he “lives off donations.”

Cottle is a Canadian citizen who lives in the Toronto area, and in July 2021, he was trying to raise money on GiveSendGo to visit his young son who lives with his mother in Philadelphia.

The campaign was “paused” by GoFundMe to ensure that it met with the platform’s terms of service. The campaign has since been deleted, but an archived version of the page is still accessible. 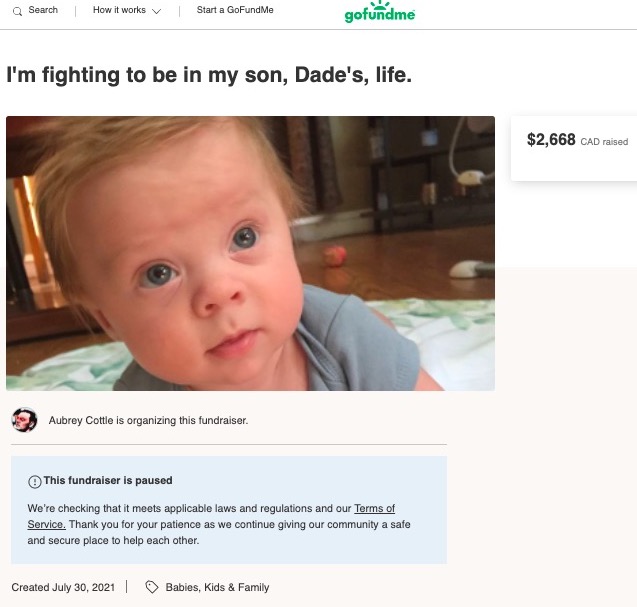 Right around the time of the doxxing of Freedom Convoy donors, Libs of TikTok posted videos of Cottle who seems like a totally normal guy and not like an unhinged maniac at all.

This is apparently the dude who hacked GiveSendGo pic.twitter.com/rmZNN9iDXb

He’s been bragging about hacking GiveSendGo for a week already. The original video which this comment was in a response to was deleted. It was presumably him bragging more about hacking. pic.twitter.com/eU6yFymK8c

She also posted a couple of links showing that Cottle had previously worked with the Canadian intelligence agency, CSIS, to dox Freedom Convoy supporters.

So… is anyone gonna do anything about this guy…? pic.twitter.com/LQX2ChjB9Y

Cottle was very proud of his hacktivism.

He despised the Freedom Convoy and its supporters. He called them “insurrectionists” for protesting against ridiculous vaccine mandates for long-haul truckers and other punitive COVID measures being imposed by the Trudeau government. 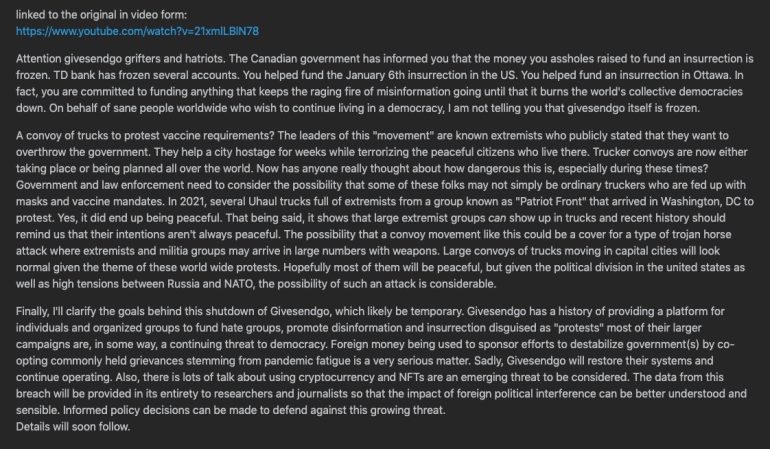 Blame Aubrey Cottle bragging about all his crimes on tic toc. Should see his other videos. A very stable human 😂 pic.twitter.com/HXoV90AmKm

After the leaking of the hacked data that doxxed the private information of people who gave money to the Freedom Convoy on GiveSendGo, the Trudeau government invoked the Emergencies Act and froze the bank accounts of organizers, protesters, and donors.

There’s a lot about Cottle/Kirtaner on the internet — everything from his hacking to accusations that he treats women badly, but it’s unclear what’s real and what’s just rumor.

But it does appear that he has been involved in hacking and that he does do a whole lot of crowdfunding, so he does seem to rely on other people’s generosity at least in part.

If he’s having a rough time of it now, well, he’s just reaping what he sowed.