To be fair, the Left has been lambasting the Thomases forever — from taking Anita Hill’s accusations seriously because she was a black woman to speculating that Ginny secretly calls her husband the “n-word” in private — but it’s ramped up significantly in recent months.

Part of the criticism was because Ginny Thomas, a staunch conservative who has been active in the GOP since high school, was a Trump supporter and texted then-White House Chief of Staff Mark Meadows on January 6 just prior to the riot.

It was also because of Thomas’s concurring opinion in the Dobbs decision. In it, he said that other Supreme Court decisions such as Obergefell with gay marriage and Loving with interracial marriage, that, like Roe, had side-stepped legislation by duly-elected representatives to become de facto law should be enshrined by actually passing legislation. Thomas suggested that legislatures should actually bring forward bills rather than leaving these very important decisions up to a handful of unelected justices. The horror.

Libs lost their freaking minds over this and said it was unnecessary to pass legislation when it was already decided by the Supreme Court.

This is kind of funny because we’ve seen legislatures pass completely unnecessary bills in the past because it’s politically expedient and gave them a good talking point. The federal anti-lynching law comes to mind.

Also, that’s how y’all got Dobbs in the first place — relying on SCOTUS to legislate abortion from the bench left Roe open to being overturned. 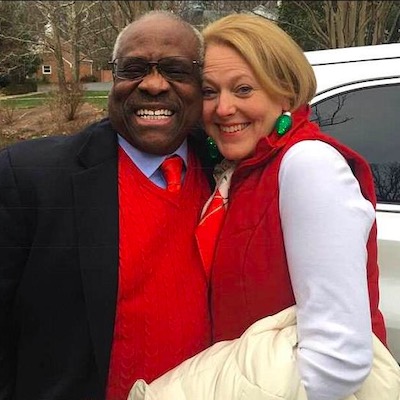 …it turns out leftist darling, Congresswoman Alexandria Ocasio-Cortez (D-NY) was not totally on board with an interracial marriage for herself.

In the October issue of GQ, among the many, many subjects covered, was her engagement to her longtime boyfriend Riley Roberts in April of this year.

AOC was quite candid and admitted that she wasn’t sure that she wanted to be in an interracial and intercultural marriage.

Late last year, Ocasio-Cortez and Roberts found themselves discussing their New Year’s resolutions. Riley had a particular priority in mind. “It’s my resolution that perhaps we can be engaged by the end of the year,” she recalled him telling her. “And I said, ‘Oh, really? Well, you’re going to have to woo me. You’re going to have to convince me, after all this time, why I should.’ ” Ocasio-Cortez told me that she never considered marriage inevitable. Her relationship with Roberts, who is white, raised its own particular questions about identity and belonging: She wasn’t positive that an intercultural, interracial relationship would be the right fit for her. And then there was the fact that their lives had changed so much, so fast. A lot of men, she told me, only believe that they want to be with an independent, successful woman. “The moment you start being yourself, they kind of freak out,” she said. “I think it causes a conflict within them that they didn’t even anticipate. It’s not even a deception. It’s just, they uncover insecurities that they didn’t know were there.”
(Emphasis added)

So, he’s fine to live with for years on end, but not good enough to marry?

No wonder the guy looks awkward in this photo. 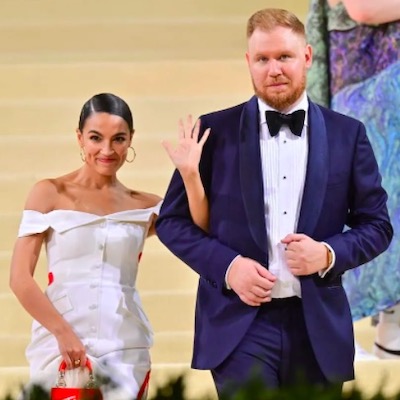 Here is AOC a year ago mocking older people in the early 90s for just starting to get on board with interracial marriage while she was still unsure if that would be the “right fit” for her personally.

Wild how many people – including the Supreme Court in gutting voting rights – have insisted that widespread racism was largely a societal problem of generations past when a majority of people in the US opposed interracial marriage up until around the time of Blue’s Clues & N*SYNC https://t.co/PSUxa7kbHs

… “I feel like I won the men lottery in my life,” she went on, answering a question I hadn’t asked, listing off men in her life whose examples she admires: the father who set the gold standard; the cousins she grew up with in the South Bronx, who overcame a lifetime’s worth of adversity and are now raising children of their own; and even her chief of staff, Gerardo Bonilla Chavez, who leads her team with grace. “It is the presence of good men that has shown me what kind of men are possible in this world,” she told me at the end of one of our conversations.

It was hard not to hear in these remarks an expression of the core belief at the base of her broader political ideology and outlook: The reality we wish for may be closer than we think.

Sure, Ocasio-Cortez’s political project would see us fundamentally restructure our society. But is that any less realistic than the hope that we’ll one day eradicate misogyny, racism, or homophobia? Are progressive fantasies about replacing our nation’s guns and capitalistic greed with guaranteed jobs and health care any more far-fetched than the abolitionist’s vision of an America without slavery or the suffragist’s dream of a democracy in which her vote is counted? The fight always seems less impossible, the congresswoman reminded me, once you realize that we’re not starting from scratch.

“The world that we’re fighting for is already here,” Ocasio-Cortez told me. “It may not be all here, it may not be the majority of what’s here, but it is undeniably here.”

As a minority woman who has been married to a white man for almost a quarter of a century, I can say that the reality of “inclusivity” has been here for a very, very long time.

Unfortunately, as I am seeing with the interactions that my children are having, it’s people like AOC that are undermining that and want to discard it.

AOC’s reluctance to “do the work” of maintaining herself and her culture in an interracial marriage is not primarily because of her concern about assimilation or whatever — it was probably because she was concerned about the optics of it. She knows very well that the race-obsessed leftists who constantly talk about “tolerance” while railing against “white men” as the bane of all existence would prefer if their Latina icon “kept to her own.”

After all, she’s got a reputation to uphold.

Heck, even Obama had to toss his own mother and grandparents under the bus.

Only a leftist like AOC could get away with this without being called out. Just imagine if you will, if someone in the GOP said that they weren’t sure that being in an interracial marriage was the “right fit” for them. What would happen if Sen. Tim Scott (R-SC), Sen. Ted Cruz (R-TX), or that new member of Congress, Rep. Mayra Flores (R-TX) said that? They’d be denounced as racists and there would be protests at their offices and houses, and probably calls for violence on social media that the algorithm weirdly wouldn’t catch.

You know it and I know it.

As an aside, what kind of man would subject himself to the sort of humiliation that women like AOC — the ones who rail against white men while being happy to be in a relationship with one — would put him through? It’s a mystery, but there are apparently a number of them out there.

"White Men Are The Greatest Threat to the U.S." Starter Pack pic.twitter.com/i7PBtQfR43

That GQ interview could spawn a dozen or so op-eds from me on the insanity and hypocrisy that she spewed. She said she wouldn’t become president because of the misogyny in America and that if she did, she’d be hampered by the checks and balances put in place by the founders and framers; that she is worried that she might be killed; and that she’s felt “open hostility” because of her very existence since she became a Congresswoman. Then, of course, there’s the high-fashion photoshoot that accompanies the article that is a hilariously accurate portrait of a “champagne socialist.”

AOC is the perfect encapsulation of the hypocrisy of the “personal is the political” crowd — she wanted to stay shacked up with her white boyfriend but wasn’t sure in early 2022 that she’d be okay with marrying him… because of his race.

This is the woman that the left is holding up as the visionary of what could be.

There are much better role models out there than a woman who is this fixated on shoving people into identity boxes.