Remember how Obama promised to ‘fundamentally transform’ America? Biden is hard at work in bringing that vision to pass.

First, we’ll lay out the case for what has been happening. Once that foundation is laid, we’ll offer a possible explanation on why it might be happening.

The heart of this story is summed up in the following words: Jim Jordan and House Republicans are investigating ‘serious allegations of abuse and misconduct within the senior leadership of the Department of Justice and the Federal Bureau of Investigation.’

Three-letter government agencies were first designed to serve the public good but, increasingly, they have become the de facto enforcement arms of one political party.

Under Obama, it was shocking to see Eric Holder act as ‘Obama’s Wingman’ and the IRS kneecapping a grassroots political movement critical of POTUS leading up to the 2012 election cycle. It was outrageous to see the CIA hacking into Senators’ laptops so that Obama could know what was being discussed about the inquiry into waterboarding. And you could ask James Rosen about that administation’s respect for Freedom of the Press, to say nothing of the chicanery behind the sandbagging of General Flynn and the dirty dealing behind Crossfire Hurricane.

Biden’s fulfillment of that promise…

All that being said, many of us still believed that we still had some institutions that were at least reasonably free of political corruption. The military was one, and federal law enforcement (at the rank-and-file level, anyway) was another.

Mandatory mask and vaccine mandates have seen many good people gutted out of a lot of institutions. What a coincidence that these tend to be people who happen to lean conservative or libertarian. It’s a sneaky way for a political hacks to ideologically ‘capture’ an institution so that it will. We’ve seen what happens to captured institutions like Hollywood, news media and Academia. They end up acting as the enforcement arm of the left’s agenda.

According to whistleblower testimony, the FBI is going further than that. And House Oversight is looking into serious allegations of systemic abuse of power to turn Federal Law enforcement

Insiders are telling Rep Jim Jordan that they are using a backdoor approach of suspensions and revoked security clearances to push people out of the FBI.:

Jordan, in a letter exclusively obtained by Fox News Digital, and written to FBI executive assistant director of the Human Resources branch Jennifer Moore, the congressman says he has received information of retaliation against FBI employees who have confidentially reported alleged misconduct to Congress.
“During the course of this investigation, we have received protected whistleblower disclosures that the FBI is engaging in a ‘purge’ of employees with conservative views by revoking their security clearances and indefinitely suspending these employees,” Jordan wrote, noting that “many of the formal notices” for those personnel actions had been signed by Moore.
Jordan also wrote that he has information suggesting Moore has “retaliated against at least one whistleblower who has made protected disclosures to Congress.” –FoxNews

Remember that Memo by Director Wray, forbidding FBI employees to talk to Congress? Looks like breadcrumbs for this go all the way to the top. The only question is … how far up.

But there’s more. Because of course there is.

“As we informed Director Christopher Wray, we take whistleblower retaliation seriously and we therefore require that you appear for a transcribed interview as soon as possible,” Jordan said.
…Jordan said that FBI whistleblowers have told the committee that Moore has been “involved with the security clearance revocations for those employees targeted for their conservative views.”
Jordan told Fox News Digital that those employees had made comments to him and Republicans on the committee about pressure within the FBI to label cases as “domestic violent extremism.” Jordan also said that whistleblowers have told him that the FBI is “pulling agents off of child trafficking cases to focus on this political narrative that you see.”
“We refer to that as juicing the numbers—its pressure that is existing at the FBI to satisfy this narrative from President Biden, where he called half the country fascist and extremists,” Jordan explained, referring to Biden’s speech last month in which he said “MAGA Republicans” are a threat to democracy. –FoxNews

What is the end-game here?

What do we know so far? We know that the left is actively trying to ‘reimagine’ law enforcement.

We’ve got active attempts to empty our prisons and eliminate bail.

We’ve got Soros-sponsored prosecutors refusing to charge criminals with crimes.

What can we conclude?

One possible explanation might be that long-term goals of the left is to erode local law enforcement so that local districts will turn to DC for help.

That would have the effect of subsuming all law enforcement into some kind of a Federal agency.

How responsive to local values and beliefs do you suppose a nationalized police force would be to Red State laws and values?

We need look no further than Merrick Garland’s harassment of Biden’s political enemies — and chronic refusal to enforce existing laws against their political friends to know exactly what that would look like.

Compare the Janes’ Revenge openly calling for violence like firebombing of pro-life centers vs the FBI SWAT team descending on a pro-life father of 7 with no criminal history.

This seems a good time to remind our Clashers that we have some rowdy swag in our online store. 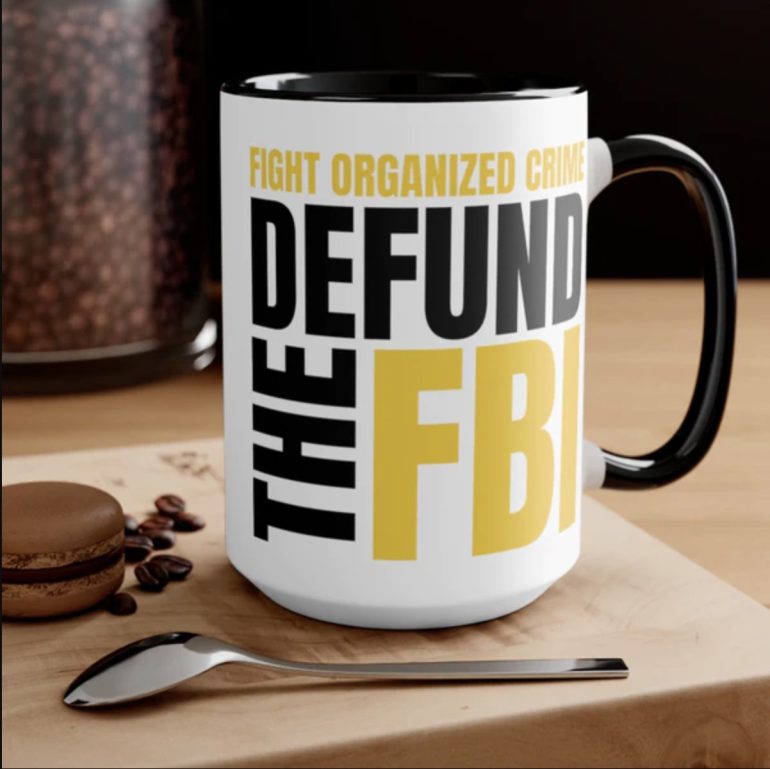