As recently as January, Joe Biden bragged about the stock market hitting one record after another. Let’s watch as he is made to eat his own words.

We’ll set the story up properly with Trump’s prediction about what a Biden Presidency would look like.

Because Trump isn’t shy about tooting his own horn, he shared stories about it on his own social media:

He also shared some cold, hard facts that even a hostile media would have some real trouble fact-checking. 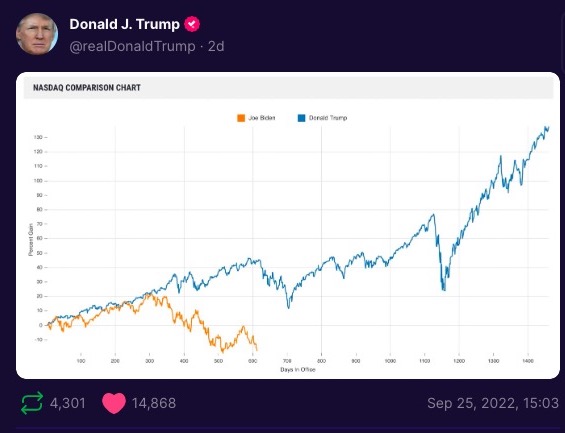 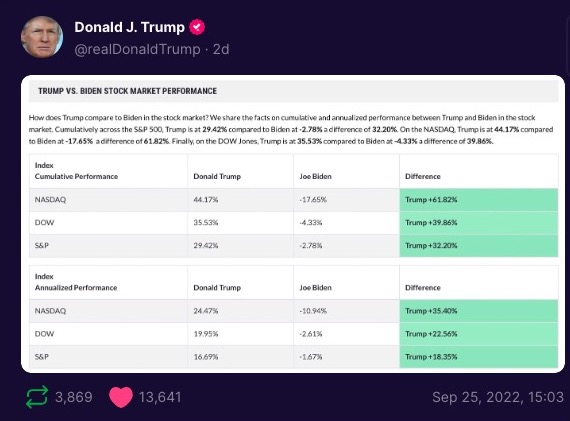 Now, back to Joe showing the world exactly how inept his so-called ‘leadership’ is.

Here was Joe back when it was still verboten to invoke the name Donald Trump among the White House staff. (Of course, now that Biden’s DOJ is treating Trump as a de facto Enemy of State, Joe is no longer shy about invoking Trump’s name… so long as he uses it with the adequate levels of contempt and/or rage.)

The boast in this clip is important for one very critical reason. Once a president brags about the successess of a stock market, he has made it clear that the stock market is a legitimate measure of that president’s leadership.

This is exactly the reason that people like Bill Maher were actively hoping for a recession leading up to the 2020 elections. They hated Trump so fiercely that they saw recession as a ‘good thing’ so long as it meant Trump didn’t get re-elected. (Then along came the WuFlu.)

A lot has changed in the 9 months since Joe Biden stood there pounding his chest about the great success of the Biden economy. With about 40 days left before midterm elections, the economy has taken a turn.

In the wrong direction.

Just in time for the electorate to elect some adults willing to put an end to Joe’s unchecked authoritarian woke agenda.