If the DOJ was trying to convince America that there is no concentrated partisan effort to throw their weight behind flipping the mid-term elections to favor Team Blue, they’re doing it wrong.

Ever since J6, there has been heavy coordination between Democrats, media & law enforcement to absolutely destroy anything even remotely connected to Trump.

There has been zero regard for the usual safeguards that have kept law enforcement from being used as a partisan cudgel.

Politico has acknowledged that the Patriot Act (together with some probable judge-shopping) has been used to bypass legal protections and Constitutional rights that have been a brake on any temptation of government agencies to use government power to settle political grievances rather than administer the law impartially.

Sitting Congressmen have had their phones seized by the Executive branch. Legal counsel has been intimidated or faced charges themselves. Reliably left-wing partisan news org Politico has even reported about an investigation being conducted into the political fundraising organization run by the most prominent of all likely 2024 Republican Presidential candidates, Donald Trump.

The Justice Department is eyeing Donald Trump’s Save America PAC, a key fundraising arm for the former president, according to a person familiar with the matter. — Politico

Many of us remember that the NRA, a major Republican political action group, was the subject of August 2020 lawsuits that just ‘happened’ to tie up their ability to throw money behind candidates and causes until AFTER the lawsuit was resolved, long after the November 2020 votes were counted.

Is the DOJ itself now so bold in their corruption that they’re playing the same game on Biden’s behalf so that he doesn’t lose power in the midterms and so that Trump is finally taken off the board for 2024?

We would hope to find a more innocent explanation, but the DOJ has hardly shown themselves worthy of any benefit of the doubt, especially with respect to anything involving Trump and his circle.

But since leaking information about a Grand Jury is a crime, how else can you account for what Harmeet is telling Tucker in this interview about Politico reporting on subpoenas even before they have been served?

Before you can leak information, you must first have that information. Who else but the DOJ would even know about these subpoenas?

Harmeet helped Tucker make sense of the news, claiming personal knowledge of at least 3 people that have been served.

Here’s Harmeet reacting to the story on her own feed…

🧵1/2 DOJ’s “Capitol Seige Section” has been busy these last few days: someone told a Politico reporter that 50 or so search warrants and grand jury subpoenas were being issued to Trump allies—before it happened. Clients, already being harassed by House J6 Committee investigators pic.twitter.com/dRybORWkUR

If Twitter suppresses it, you can find the same Tucker clip here.

If the DOJ was trying to convince America that there is no concentrated partisan effort to throw their weight behind flipping the mid-term elections to favor Team Blue, they’re doing it wrong.

The left isn’t even shy about having subverted (our word) or ‘fortified’ (their word) elections in the past. Time Magazine even boasted about the coordinated opposition to suppress Trump and benefit Biden.

The left knows that there was a ‘conspiracy’ (their word) to suppress real information about Hunter’s Laptop in 2020, but wouldn’t care even if Hunter had bodies in his basement (a reference to an actual quote) so long as the conspiracy kept Trump from being re-elected.

Have we already forgotten how, in Summer of 2020, Podesta played the part of Biden in a ‘Wargamed’ election scenario in which had left-coast states ready to secede from the Union rather than accept Trump’s 2nd term?

What Happens If Joe Biden Refuses To Concede The Election? Politicos Created A ‘War Game’ To See What Would Happen…
In the scenario involving a narrow loss, Podesta (playing Biden) REFUSED to accept the result, leading to ALLEGATIONS OF VOTER SUPPRESSION, as well as PUSHING GOVERNORS TO SEND FAITHLESS ELECTORS TO THE ELECTORAL COLLEGE. 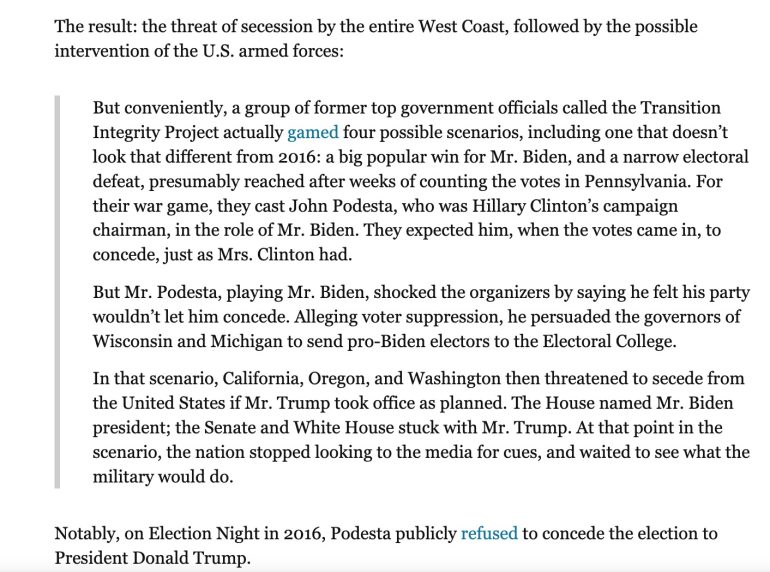 ClashDaily covered that story in some detail, but for brevity’s sake, this is a screenshot from Breitbart citing the NYTimes.

If they can give themselves a sufficiently plausible justification for why turning America into a de facto one-party state is the best way to ‘defend democracy’ what would really stand in their way from doing so?

Do we really think the timing of the open hostility in Biden’s Red Sermon, the J6 primetime made-for-TV event, Hillary’s call for a purge, and growing evidence that the internet misinformation silencing of the political right has been mere coincidence?

All of this lines up perfectly with the bare-knuckle authoritarian objectives of demonizing and destroying political opposition laid out by Hillary loyalist David Brock in his 2017 White Paper: Media Matters War Plan 2017, laid out even before Trump was sworn in.

The 20th Century has seen politicians in power demonize their political opponents as an existential threat to the nation. Where did that lead every time it was tried?

Whether it was done by thugs on the left or the right, it invariably led to the suspension of legal rights, civil unrest, and eventually, an authoritarian police state.

How about we learn from the past and choose NOT to go down that road.

We can start by putting a curb on authority by taking the gavels back from Chuck and Nancy in November.