It looks like fans aren’t keen on the remake.

There are numerous reasons why fans might be reacting badly to the new movie. The first is that it’s just so unoriginal — Disney is just doing a “woke” retread of their classics to appeal to fans’ nostalgia while messing around with the original story. It’s also visually it’s dark and dingy and it’s like they’ve sucked out all of the vibrancy in the colors which you’d think would be something they’d want to play up in an underwater world.

And then, of course, there is the “re-imagining” of the character of Ariel.

It’s not exactly something that can be ignored. 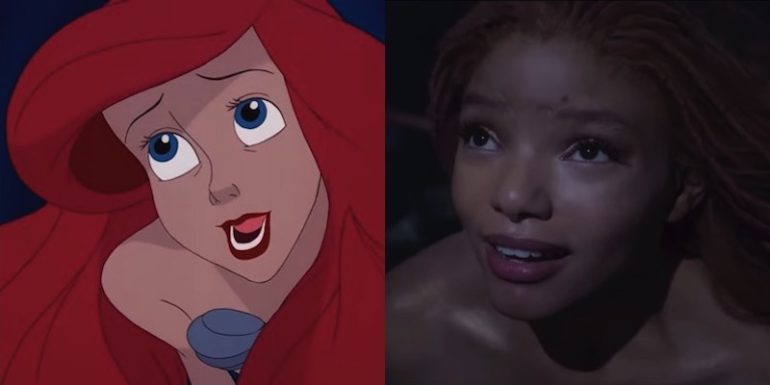 There is some backlash that the beloved redheaded mermaid is now a black mermaid because of Disney’s commitment to “colorblind” casting.

It doesn’t change the story that Ariel isn’t white, and in the grand scheme, who cares?

Halle Bailey who plays Ariel is clearly quite talented, but… what’s with the singing? It sounds more pop than Disney musical which has a particular style. That is perhaps a more legitimate complaint.

Those defending the move and insist it’s no big deal say that a mermaid can be of any race, and that’s true, but some people are still taking umbrage at a character that has been portrayed as a redhead for more than 30 years is now being altered.

The Daily Mail’s report implies that the backlash is largely based on racism.

A trailer for Disney’s live-action version of The Little Mermaid has racked up more than 1.5 million dislikes on YouTube after its star Halle Bailey faced racist backlash from trolls on Twitter after being cast in the leading role.

The negative response to the movie’s official teaser trailer – the first real glimpse at the movie – has been so severe that YouTube has now disabled the dislike counter, but not before it reached more than 1.5 million.

For many, the trailer was an exciting first look at the live-action version of the iconic Disney princess story, with parents the world over sharing sweet videos of their young children watching in awe as the clip played.

But among the excitement and the praise surrounding the movie, there has also been a bitter wave of racist backlash over Disney’s decision to cast a black woman in the lead role…

…Although YouTube has disabled the dislike counter, many social media geniuses have installed a popular extension that shows them just how many people didn’t like a video.

Many critics have been slamming Disney for their visuals and noting that it doesn’t appear as the princess is under water, while others have taken a swing at Halle and the director Rob Marshall for casting the star.

The outrage is probably in part because the race-swapping only ever goes one way — white characters are cast as other races, but you don’t see that happen in reverse.

It’s so significant that they’re not just casting fictional characters as a different race, they do that with historical figures as well.

Here is the trailer for an AMC series on Anne Boleyn — a real person who was white — cast as a black woman.

Hollywood does this all of the time. Lin Manuel Miranda’s “Hamilton” famously race-swapped the characters of America’s Founding Fathers. That was a big part of its success.

Imagine the outrage if you took a black character and race-swapped him or her to be white. It would be jarring.

The point here is that the “colorblind casting” standard won’t ever see a white actor cast as Black Panther as Marvel continues to milk those superhero flicks as much as they can.

If you take the wokescold argument that it’s so important to have diverse “representation”, then isn’t it a bit of a problem to recast a beloved Disney princess that is a ginger? Does Disney not care that they’re taking away a role model for little red-haired girls because she just isn’t diverse enough?

This is the problem with the push for diversity casting, some online critics are saying that Bailey got the role because of her race and not because she’s the best fit for the role.

Meanwhile, the people who are pushing this diversity and inclusion insist that these films with “diversity casting” are to be supported in order to push back against racists.

While some of the criticism online probably is racist, that doesn’t mean that all of it is based on racism.

YouTuber, Jeremy Hambly, known online as The Quartering posted a video about the criticism and noticed that the people that are whining about the “racists” complaining don’t actually provide evidence of any racist criticism.

As Hambly notes in his video, Disney is changing the stories to promote the idea of strong, independent women that don’t need men.

…while Eric (Jonah Hauer-King) will still be a major character in next year’s The Little Mermaid, Bailey says her Ariel also won’t be defined by a romantic attraction.

“We keep a lot of the meat of the film that made us all fall in love with this film,” says Bailey, 22. “It’s really her, and her gumption. And just excitement for the life above [her] world. So it’s amazing, but it’s also updated with the current times.

Zegler, who is Latinx, and Bailey, who is Black, are also representative of Disney’s ongoing efforts to embrace diverse, color-blind casting across its properties.
Source: Yahoo Entertainment

Maybe people just don’t like the updated “woke” versions of these classic movies. It seems that Disney is committed to “fixing” the politically incorrect classic movies to cater to the Disney princess critics without recognizing what made these movies successful in the first place.

All of the new Disney movies are like this. The recently released “Pinocchio” included a black woman as the blue fairy, which is fine, but it missed some of the significant lessons in the story… which was the point.

One Twitter user that reviews films laid out just how badly Disney messed it up.

But in the remake, Jiminy Cricket successfully convinces Pinocchio not to listen to Honest John, so Pinocchio goes to school, only to get kicked out because he's not a real boy. Then Honest John offers to take him to Stromboli again, and this time, Pinocchio accepts. pic.twitter.com/eKMIOMUAd9

The Pinocchio remake is not a movie. It's a filler product. It's what a buffet puts out just so they can say they have a variety of things to choose from, but they don't expect anyone to actually eat it, then they just throw it away and write it off on their taxes.

Perhaps the real issue is that Disney is too busy pushing an agenda and no longer creating good movies that parents want to take their children to, and fans are fed up with it.