If you’re going to go on the offensive with mud-slinging attack ads, it’s a good idea to make sure that your own hands are clean first.

That may be solid advice, but it doesn’t mean the people who SHOULD take it, DO take it.

It was bad enough when it came to light that Mr. Man Of The People Fetterman has been getting a yearly allowance from his daddy bigger than the average American’s salary.

Remembering that the current median salary is about $54k per year, here’s how his daddy padded the tough guy’s bank account late into ‘adulthood’.

Fetterman, who has acknowledged his “cushy” suburban childhood, has openly admitted to the financial contributions his parents gave him as an adult.
For example, in 2015, his parents gave him $54,000, which he disclosed during his failed 2016 Senate candidacy, according to the Pennsylvania Inquirer. Both of his parents provided he and his wife four $13,500 gifts, totaling $54,000, which was just below the $14,000 threshold for taxable gifts at the time. –Breitbart

That doesn’t tell the whole story, though, does it? Most Americans use their income to pay for such luxuries as food and shelter. Not Fetterman. He got a sweet deal from his sister, in which he was able to purchase a loft home for one dollar.

But that didn’t stop Mr Blue Collar from cranking up his campaign of self-righteous stone-throwing at the fact that Dr. Oz has been financially successful and owns multiple homes.

Dr. Oz, not surprisingly, used this risible man-child behavior as an opportunity to get some digs in. While he’s not the effortless media troll that other political personalities like Trump and DeSantis, he was still able to take the occasional Puckish swipe. 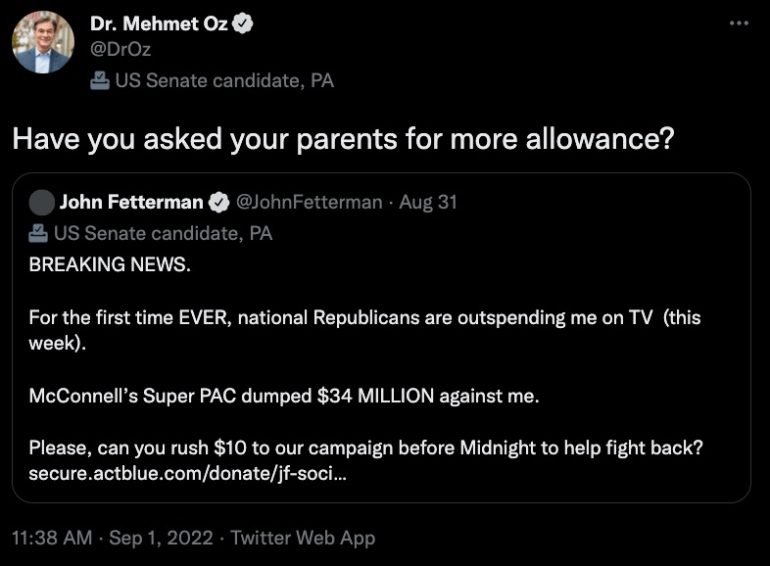 MISSING – John Fetterman refuses to pay his taxes but wants you to pay more. pic.twitter.com/K8olApDHNS

My Dad grew up on a dirt floor, but with years of hard work and resilience, was able to achieve the American Dream. I'm proud to be an embodiment of that American Dream, and I'm running to ensure that all Pennsylvanians can achieve prosperity, too. pic.twitter.com/XONG0PsXgt

But now, that same attack has boomeranged against Fetterman himself.

A watchdog group is filing a complaint asking the Senate Ethics Committee to investigate why Pennsylvania Democrat John Fetterman did not disclose eight real estate assets on his most recent personal financial disclosure. —
The total value of the properties he left off his disclosure form was $108,800. All eight of the properties were in Braddock, Pa.- Fetterman’s hometown where he served as mayor. His name is listed as owner on all of them on the Allegheny County website. Many of the properties appeared to be empty lots worth between $10,000 and $20,000 that are surrounding Fetterman’s home. One was a building structure worth over $40,000. — DailyMail