This fraud that was committed on a massive scale was even more insulting because it was taking taxpayer money from a program designed to feed needy children during the pandemic.

Minnesota-based non-profit, “Feeding Our Future” along with 200+ meal sites in Minnesota claimed that they had been feeding a staggering 50,000 underprivileged Somali children during the pandemic and sought government “reimbursement” to the tune of a quarter of a billion dollars.

It turned out to be a massive fraud operation. What could have possibly tipped off the feds? Might it have been the scale?

Fifty thousand kids in the Twin Cities? That is a lot of hungry Somali kids in Minneapolis-St. Paul!

Twin Cities Pioneer Press reported in January, “A Twin Cities nonprofit and a web of business operators stole tens of millions of dollars in federal funds that were supposed to help feed needy children while schools were closed during the coronavirus pandemic, according to court records.”

The report states that over 200 FBI agents raided dozens of locations in the area related to the massive fraud operation including the offices of “Feeding Our Future” and the home of its executive director, Aimee Bock.

These people were bold — they exploited a pandemic program that allocated taxpayer funds for programs to feed underprivileged children while schools were closed during the pandemic and used a series of shell companies to hide the fraud.

The Minnesota Department of Education on Thursday moved to terminate Feeding Our Future as a sponsor and cut off funding through the U.S. Department of Agriculture’s Summer Food Service Program and Child and Adult Care Food Program.

…Bock’s Feeding Our Future has been a major beneficiary of the USDA’s pandemic waivers.

Formed in 2017, the nonprofit took in $3.5 million in food reimbursements in 2019, $42.7 million in 2020 and $197.9 million last year. The sponsor charged a 10 percent administrative fee on those reimbursements through its contracts with site operators, many of which were run by members of the East African diaspora.

Several site operators spent little or none of that money on food for children, the FBI alleges.

Feeding Our Future itself claimed to have operated a number of high-volume distribution sites, but visiting FBI agents found the parking lots empty.

The warrants say Feeding Our Future employees, as well as multiple business operators, set up shell companies they used to hide proceeds from the scheme.

No charges were laid at the time.

On Tuesday, Attorney General Merrick Garland announced indictments against 47 individuals, 46 of which are Somali, connected with the scheme.

This is what happens when immigrants aren’t properly integrated into American society — especially when the are from countries that (shall we say) don’t share our values.

Transparency International ranks Somalia as one of the worst countries in the world for corruption.

Perhaps this is just another example of immigrants doing the work that Americans were unwilling to do — defraud the government on a massive scale by stealing money intended for hungry children.

“This was a brazen scheme of staggering proportions,” said U.S. Attorney Andrew M. Luger for the District of Minnesota. “These defendants exploited a program designed to provide nutritious food to needy children during the COVID-19 pandemic. Instead, they prioritized their own greed, stealing more than a quarter of a billion dollars in federal funds to purchase luxury cars, houses, jewelry, and coastal resort property abroad. I commend the work of the skilled investigators and prosecutors who unraveled the lies, deception, and mountains of false documentation to bring this complex case to light.”

The 47 defendants are charged across six separate indictments and three criminal informations with charges of conspiracy, wire fraud, money laundering, and bribery.

As outlined in the charging documents, the defendants devised and carried out a massive scheme to defraud the Federal Child Nutrition Program. The defendants obtained, misappropriated, and laundered millions of dollars in program funds that were intended as reimbursements for the cost of serving meals to children. The defendants exploited changes in the program intended to ensure underserved children received adequate nutrition during the COVID-19 pandemic. Rather than feed children, the defendants enriched themselves by fraudulently misappropriating millions of dollars in Federal Child Nutrition Program funds.
Source: U.S. Department of Justice

While U.S. Attorney Luger says that it was paid for luxury cars, houses, jewelry, and resort properties, he didn’t mention that it also paid for pilgrimages to Mecca.

The Feds staked out various Feeding Our Future meal sites and found no one at the places that were supposed to be feeding 50,000 children. According to the FBI, the money being stolen wasn’t used to feed children, it went into various shell companies and fronts operated by Somalis and was used to buy everything from a Porsche to African properties.

Nothing says “I’m a devoutly religious person” like stealing money meant for feeding underprivileged children during a pandemic in order to go on a pilgrimage.

Speaking of devoutly religious people that violate the basic tenets of their faith, here’s what Somali Minnesota Congresswoman Ilhan Omar had to say about the fraud scheme:

This fraud scheme purportedly orchestrated by Feeding Our Future is reprehensible. Using the guise of feeding children to funnel millions of dollars toward extravagant expenses is abhorrent & anyone who participated in this scheme must be held accountable. https://t.co/dndydBx8rc

That would be this Rep. Ilhan Omar:

Nearly Three Dozen Somalis Say That Rep. Ilhan Omar May Have Committed A ‘Spree Of Felonies’–Here’s The 411

Omar can tweet about it, but she’s had close ties to one of the restaurants involved in the scam over the last few years as noted by Glahn.

“The relationship between Safari Restaurant in Minneapolis and Congresswoman Ilhan Omar’s political campaigns date back to 2016. The money flows both ways,” writes Glahn.

“As a candidate for state representative, Ilhan Omar listed Safari restaurant as a vendor, according to records on file at the state Campaign Finance Board. Records show two events were held at the restaurant, one event in each of the years 2016 and 2017. The relationship continued after she made the jump to the U.S. Congress,” he continues.

Omar celebrated her win in the August 2018 Democratic primary at Safari Restaurant. Here is a photo of her there: 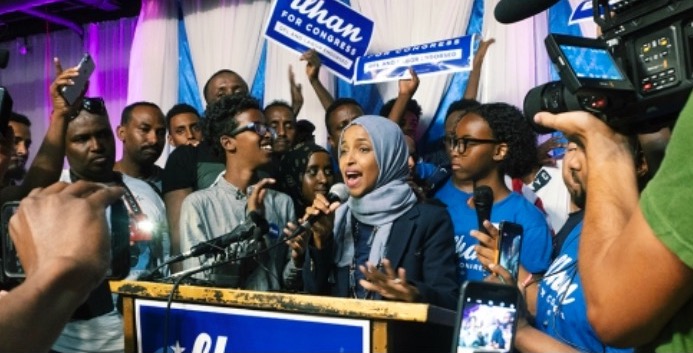 That’s quite a flashback. That was all the way back in her hijab days when she was only on her second marriage… or is it her third? It’s difficult to figure out where her marriage to her brother fits in.

“Records at the Federal Election Commission for Omar’s campaign list twelve entries for Safari Restaurant, from 2018 to the most recent one in May 2020,” states the article, “Her federal campaign spent almost $10,000 at the venue over the years, on food, beverage, and space rental, with an additional $1,100 from her statehouse days.”

Daniel Greenfield at FrontPage Magazine noted some interesting features about this story.

A key element in the fraud was crying racism. Some politicians came forward to back them up. And there are questions as to what extent politicians, especially those catering to Somalis, helped enable it.

Rep. Ilhan Omar has made government meals for children into one of her signature issues.
Source: FrontPage Magazine

David Steinberg, who has been reporting on Congresswoman Omar for years, including breaking the story about her marriage to her brother, tweeted that she has nothing to worry about.

As everyone knows, @IlhanMN has close connections with some of the perpetrators, and any competent prosecutorial office could start this morning and have her indicted by lunchtime.

Everyone also knows she has nothing to worry about. https://t.co/d5MTJgCIhK

Democrat privilege on top of minority privilege means that she is above the law. We already saw that with what appears to be immigration fraud with her fake marriage to her brother. Nothing was done about that either.