A lawless lunatic in Tacoma Washington opened fire on police and terrorized neighbors this past August. We now have the video of both the criminal himself and how his rampage came to an abrupt end.

Police were responding to a complaint alleging 40yo Peter T. Collins, with a history of violence had assaulted his nephew. That encounter quickly escalated into a shoot-out with police.

A combination of doorbell cameras and police body cams caught much of what happened next.

The shortened cut-to-the-chase version can be seen in this clip, where responding officer Christopher Munn can be seen below. This is how the clip was introduced… 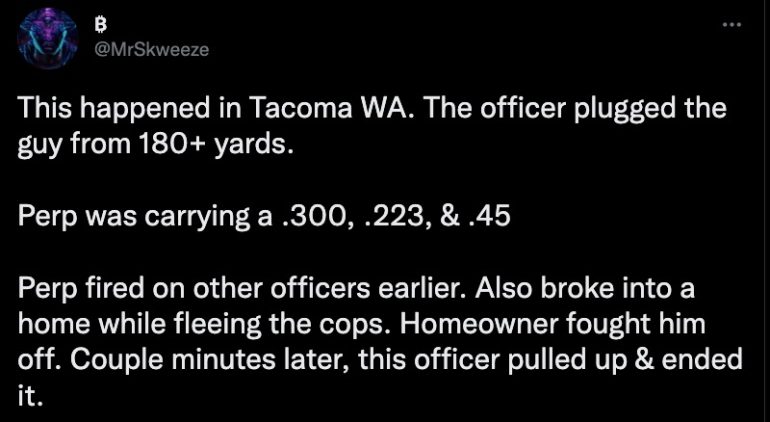 And this is the video of the officer rolling up to the scene after the perp had already opened fire on the first officers on scene.

Munn puts his coffee down on the dash, gets out of the vehicle, and gets to work.

But if you want to know the full story of what actually happened, here’s 7 minutes of video (using several perspectives stitched into one clip) that gives some explanation of the context, includes a map, and shows scenes of the police taking cover from incoming fire.

The Pierce County Force Investigation Team released the video as part of its ongoing investigation into the shooting. Investigators concluded Collins fired off 15 rounds, while Tacoma police officers returned nine rounds, all of them over a 16-minute period.
The last shot came from a TPD officer, identified as Christopher Munn, who fired his weapon 183 yards away. — KIRO7

Reports indicate that the perp was wounded twice, one wound came from a police rifle and the other was self-inflicted.

Not only did he shoot at police, with the several weapons in his possession, but he tried to break into a neighbor’s house while fleeing the scene.

There is no indication that anyone other than the perp was hurt in the exchange of gunfire.

Since we know the gun-grabbers will start freaking out anyway, let’s restate the obvious. If Peter T. Collins had a prior criminal history, he could not have been in lawful possession of even one firearm, let alone several. If he’s a convicte felon, simple possession of a firearm would itself be an offense punishable. We also note that the criminal complaint that set events in motion were an allegation of domestic abuse… which is among the actions that disqualifies someone from gun ownership.